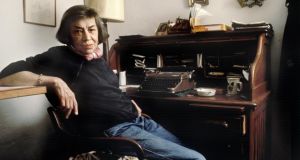 Richard Bradford’s oddly disapproving, compelling new biography of the novelist Patricia Highsmith, born a hundred years ago in Texas, sets out to uncover the truth behind the image. Other biographers have admired her as the inventor of memorable characters such as the conspirators in Strangers on a Train or her amoral anti-hero Tom Ripley. Bradford gives us Patricia Highsmith the predator, arch-manipulator and sadist, whose characters’ worst attributes belong to their creator.

As a subject for a biography, Highsmith comes with a comet’s tail of paperwork, often generated by herself – diaries, letters, notebooks, manuscripts – and Bradford has made full use of this material. But alarm bells ring from the first line: “Leaving aside one’s personal opinions on her work, it has to be accepted that Patricia Mary Highsmith was an incomparable individual.”

2 Q&A: Covid vaccine side effects – What are they, who gets them and why?

3 Food and mood: Why nutritional psychiatry is attracting attention

6 Maternity leave during lockdown has its advantages

7 Covid-19: State on track to ease retail restrictions in May amid extra Pfizer vaccines

9 Unionism not emotionally ready for conversation about united Ireland

12 ‘They could have killed me’: Man pushed off bicycle while cycling at Sally Gap

14 Tenant promises to pay compensation after removing rafters from house

18 Newton Emerson: London and Dublin are making a problem of a solution

19 ‘I could attach 10 years of sadness to a throwaway comment, and nobody would know except me’

21 The US version of The Circle is brasher, more annoying – and twice as addictive

23 Q&A: What now for AstraZeneca and Johnson & Johnson vaccines?

25 ‘I just want to be home’: Passengers scramble for the last pre-quarantine flight from Paris

26 Michael McDowell: We have to stop pressing for a border poll

28 My Bloody Valentine: Very loud, very fuzzy, and heading back to their Irish studio

30 Harry and Meghan: The union of two great houses, the Windsors and the Celebrities, is complete

33 Lena Dunham: ‘There’s so much judgment around bigger bodies, like bigger women are stupider’

38 Covid-19: Recalibrated vaccine rollout plan to be submitted to Government this week