Derek Walcott: exuberant poet in love with the magic of words 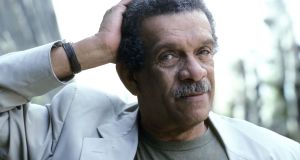 Lamentation will rend the air today, and not just in his native St Lucia in the Caribbean, but everywhere poetry is revered. Derek Walcott, who died on Friday aged 87, was a magnificent poet. His art, shaped by Shakespeare and the Bible and an inspired balance of the ritual and the colloquial, enters the heart as well as the memory.

He believed in the power of language and his was exuberant, his metaphors pulsating with energy and colour. He was a natural poet and even at his most realistic – and raised in poverty, he was a realist – he never lost his belief in the magic of words and the images it describes.

He once likened poetry to a snail moving along a wall in possession of its own concept of eternity. His death is sad and yet he loved life too much to enjoy being ill and must have hated being vulnerable.

Where I come from, we sing poetry

Awarded the 1992 Nobel Prize in Literature he would point to the irony of knowing his literary tradition not only mastered a language which had been imposed on his race, “we made it soar.”

A buoyant, gravel-voiced showman, he was a fine reader of his work with its huge themes of the colonial experience and national identity. He was also confident, funny, explosively opinionated, playful and occasionally outrageous. Above all he was in love with poetic expression and the way it helps us see the world that bit more clearly.

How he would have laughed his big, booming laugh at the idea of dying on St Patrick’s Day. He would have loved to brag about it to his friend and fellow Nobel literature laureate Seamus Heaney, whom he had beaten to the prize by three years. “I am older though,” he said when I met him, “although I look so much younger and am better looking.”

Walcott would say things like that, seeking a reaction. Before our interview even began, he insisted on buying me ice cream “because you are so skinny”. My first impulse was to run away but I am glad I didn’t.

He was great fun once you settled into the comic routine interspersed with rich insight and a wonderful use of the vocal rhythms of exasperation. “Where I come from, we sing poetry, ” he said. He created an aura of happiness, not self importance.

Once I ate the ice cream – he didn’t have any – we returned to the hotel in Dún Laoghaire, Co Dublin, near the sea where the interview was to tke place. He noticed a picture on the wall and remarked initially only in passing that his father was a painter. But then he became more serious and continued: “A painter and a poet, he painted water colours but, you know, I never knew him. He died when he was only 30 and I was a baby, with a twin brother. Imagine that.”

At the time I met him Walcott would have been 58 and already described by the Russian poet, Joseph Brodsky, as the finest poet writing in English. For all the gags, he had on entering the hotel paused and on assessing the seating arrangements announced he would take the sofa, “I’ll recline, I’m the big shot. You my dear, may have the chair.”

Still he was rare; he has left a vibrant body of work. His Collected Poems: 1948 -1984 is one of the most exciting volumes one could hope to encounter. In the poem Beachhead, he writes: “a channel/of the river is pushed back/by the ancestral quarrel/of fresh water with salt.”

One of the several copies I have of Omeros, his magical long poem in which Achille and Philoctete are simple West Indian fishermen, is inscribed “October 8th 1992: On the Day That Derek Walcott Won the Nobel Prize.”

That was a moment of celebration (predating Heaney’s triumph) and the best way of marking it was reading long passages aloud. Walcott’s Odyssey is a mythic, lyrical narrative, a West Indian variation of Homer’s epic in which the classical meets the everyday experience of his country.

An incantatory quality drives his work, but even when it is ceremonious, it is always physical with a vigour which is Walcott, who though influenced by Robert Lowell, was uniquely his own with a voice

His big gestures may have owed a little to his long involvement with theatre. He directed the Trinidad Theatre Workshop from 1959 until 1976. His brother Roderick was a playwright and settled in Toronto.

As a boy Walcott had been raised as a Methodist by his school teacher mother, whom he loved. He was grateful to the Irish Presentation Brothers, who arrived on St Lucia as he entered his final year of school, for introducing him to Synge and Joyce.

If you talk about language in the Caribbean, you must relate it to history

His first poem, The Voice of San Lucia – “Miltonic in form,” he said, seriously, not joking – was written when he was 14 and was published in a local newspaper.

He was to teach in Harvard, Yale, Columbia and Boston University and was recognised as one of world literature’s finest poets. The Arkansas Testament, dedicated to Seamus Heaney, was published in 1987. In it Walcott considers his Caribbean heritage and also his place in the wider world.

Behind the fun he was aware of the anger and the damage inflicted by generations of empires – Dutch, English, Spanish and Portuguese. “If you talk about language in the Caribbean, you must relate it to history,” he said. He did but he also reinvigorated expression and diction.

No matter how far he travelled, or the international honours he gathered, he adored San Lucia – “my island, my heaven” – and revelled in the “street talk, the gossip, the bickering.”

Fittingly for him as a modern day Ulysses and one of the literary giants of our time but devoted to his island home, he died at the place his life’s journey had begun.