December Bride: A grim masterpiece about life in an unforgiving place

25 years after the release of the film version of Sam Hanna Bell’s book, Eileen Battersby examines one of Ireland’s finest novels 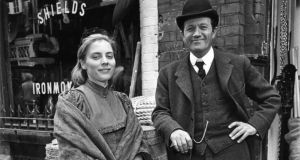 Saskia Reeves and Donal McCann taking a break from the shooting of the film December Bride in Anglesea Street, Dublin in 1989. Photograph: Paddy Whelan/The Irish Times

This year marks the 25th anniversary of the release of Thaddeus O’Sullivan’s poignant film version of Sam Hanna Bell’s powerful novel, December Bride. The movie starring Donal McCann and Ciaran Hinds as two brothers controlled by a determined young woman, Sarah, played by the then newcomer Saskia Reeves, is a brilliant adaptation.

Sam Hanna Bell was a gifted broadcaster, a natural communicator with a human touch that graced more than 600 radio documentary features, including an archive classic, This is Northern Ireland. One of his most intriguing achievements was his 1980 documentary, West of Derry, East of Eden in which he explored the Ulster heritage of the great American writer and 1962 Nobel Laureate of Literature, John Steinbeck.

Bell also wrote four novels, the finest of which is December Bride. In it he not only evoked the sexual and emotional tensions fuelled by an opportunistic bid for independence by an unlikely perpetrator, but also presented an extraordinarily intuitive study of social history and life as lived in a remote, introspective and unforgiving area.

The setting is bleak and the time is the early 20th century. Andrew Echlin and his two grown sons face domestic confusion when the old man’s wife dies. The only solution is to find help. The widow Gomartin and her daughter, Sarah, are recruited for the task. The women assess the situation and move to the farm. Skilled organisers, they quickly restore order.

Little comment is passed on the arrangements. In a tough Presbyterian farming community scattered across the magnificent landscape of Strangford Lough in Co Down, there is scant time for nonsense. Words are seldom wasted. The locals work hard, heed nature, attend their church and abide by the rules. Yet gradually many of those rules begin to be challenged by Sarah, whose determination to defy her destiny shapes her every thought and gesture.

It is no coincidence that Sam Hanna Bell prefaces his dramatic narrative with a quote from Thomas Hardy’s poem ‘Honeymoon-Time’. If ever a literary presence were seen to grace the telling of a tale, it is that of Hardy, whose fatalistic, lyric genius presides over this powerful novel.

Andrew Echlin proves a kindly patriarch, and to young Sarah Gomartin, well used to hard work since childhood, the securing of his favour is all important for her future.

Although she is aware of the interested glances directed at her by Frank, the attractive younger son, Sarah knows that real power rests with the father. What begins as a treat, the granting of a boat trip, ends in tragedy. Andrew decides to die to give his sons a better chance at saving themselves and the girl. From that point on Sarah, long convinced she has no need of God, having reminded Martha Gomartin, her mother - “My father died on the roads, and ever since I can mind my life has been nothing else but slaving for other folk” - is confident she can manage the Echlin brothers. She does.

Bell was born in Glasgow in 1909 to an Ulster-Scots family and worked at many jobs before turning to writing. He was lucky in the support of the major poet, Louis MacNeice, but there was more than luck to it - Bell’s descriptive, austerely rhythmic prose lives off the page. The characterisation is exact; here are plain-speaking Ulster farming people caught in an unnatural dilemma. Ever festering away in the background are the realities of religious bigotry, tribal loyalties and sexual jealousy. Not only does December Bride read as a prophetic, earlier variation of John McGahern’s Ireland, it could as easily take place in the France of Balzac or Zola.

Sarah soon attracts a suitor, Pentland, a local man of property; but she gambles on securing the Echlin household and defies her mother who returns to their family home without Sarah. Pentland gradually detects the sexual tension between Sarah and Frank, and abandons his quest. The stark potency of the narrative rests in the astute characterisation of the secretive, calculating Sarah, who engages sexually but never emotionally with the brothers. “She shared herself between them both, in body and in mind, and so disarmed the younger brother.”

Frank’s urgent desire is balanced against the less complex needs of Hamilton, his older brother. Sarah manipulates them both and Bell carefully plots the power shifts within the household. When a baby boy is born his paternity is questioned. The local rector becomes involved and takes flight on discovering his own confused sexual interest in Sarah. All the while she watches. Just when she feels she has control, Frank begins to look elsewhere for romance, causing Sarah to identify a potential threat to her position - the possibility of his taking a wife.

Resentments grow. Frank’s bid for freedom ends in disaster. The Echlin farm expands and Sarah sees off the local Catholic woman tenant who never approved of her. Certainties are chipped away. Lives end. Sarah loses her mother, and then old Agnes, her only friend. Agnes’s death leaves her husband, Petie, increasingly helpless and destined to a nightmare end in a Belfast alley.

Time passes; a second baby is born to Sarah, who never relaxing her watch, retains control. When an accident results in yet another death, she realises where her love had really lay during the long years.

This is an intensely humane morality play about desires sought and ambitions snatched. Situations become part of local history and regrets linger as major decisions are reduced to logical outcomes. Sarah Gomartin emerges as a shrewd, dauntingly human survivor in Bell’s grim masterpiece that ranks high amongst Ireland’s finest novels.

By a cruel footnote, Bell, who had declined director Thaddeus O’Sullivan’s offer to play the part of the Echlin patriarch, Andrew, in the film version, feeling he was too old and anyhow, had no wish to drown as the old man had done in the novel, suffered a fatal heart attack a week before the movie was released.