Deborah Smith: Publishing is an industry, but translation is a community 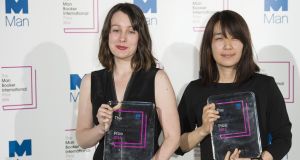 One of the best things about the new Man Booker International prize was hearing it described as “a win for literary translation as a whole”, which seemed absolutely correct and wholly appropriate.

Another quite good thing, of course, was that it was a win for me. (I have been told by some people, who clearly have never had to choose between heating and eating, that it is “vulgar” to talk about the money. I thought it best not to reveal that I’ve spent the past two months with “Twenty-five grand” on a scrolling news ticker in my head.)

But when the announcement came and I promptly welled up, it wasn’t at the thought of being able to replace my fold-up furniture. It was because translators are the friendliest, most non-competitive, mutually-encouraging group of people you will ever have the pleasure to meet. Publishing is an industry, but translation is a community; nobody’s in it for the money, largely because there usually isn’t any. (That this is improving is thanks to the sterling work of individual lobbyists and the UK Translators Association, campaigning against the pitiful rates, copyright rustling, and general disregard that plagues the profession.)

As a translator, you’re only ever as good as you’re enabled and encouraged to be – by the brilliance of the original writing, by the opportunities given by agents and publishers, and by the support of your peers. Several of the latter were at the award announcement, including some fellow shortlistees. My tears were largely tears of gratitude.

Equal recognition This gratitude is not only for the team effort that resulted in The Vegetarian taking home the Man Booker crown, but for the fact that the prize existed in the first place, in its new guise awarding equal recognition to author and translator. A generation of translators before me had fought long and hard for literary translation to be considered a creative act in its own right, as opposed to a rather dull, workmanlike process of substituting equivalents.

I’m also grateful to Han Kang, her agent Barbara Zitwer and our editor Max Porter, for giving a first-timer the chance to translate one of the greatest writers at work today. And if The Vegetarian has opened the door for South Korean literature, what’s waiting on the other side is enough to make even the most jaded reader sit up and take notice.

The prominence afforded the short story has resulted not only in world-leading iterations of the form, but also a far more fluid, diverse conception of “the novel”. This often has a greater focus on voice and atmosphere than plot and character. In the 1980s, there was a notion that Korean literature had an ideological function as a nation-builder. This has fallen away, ushering in a contemporary scene that has an extraordinarily fecund imagination and a healthy disregard for rigid boundaries between genres and styles.

Call me biased, but it can’t be a coincidence that several of the Korean authors writing the most arrestingly unconventional prose have a double-life as translators. Bae Suah is almost single-handedly responsible for introducing Fernando Pessoa and WG Sebald to a South Korean readership. I’ve translated two of her novels, the first of which, A Greater Music, is a semi-autobiographical work about a Korean writer living in Berlin that manages to be both lyrical and dissonant, avant- garde and deeply moving.

Then there’s Han Yujoo, an ardent Thomas Bernhard fan who translates fiction by the likes of Geoff Dyer and Michael Ondaatje. In her first novel, The Impossible Fairytale, time freezes, characters protest their fate, and language is pared down to the bone, creating a strange beauty through hypnotic repetition and vivid imagery. Tilted Axis, the not-for-profit press I set up last year, will be publishing the book in Janet Hong’s gutsy, inventive translation.

Shape-shifting tale Our first South Korean title is Hwang Jung-eun’s One Hundred Shadows, an eerie, shape-shifting tale set in a slum earmarked for demolition. It is a mix of oblique fantasy, offbeat romance, and biting social critique that won both a major prize and the admiration of Han Kang.

One Hundred Shadows is translated “with shimmering lucidity” (Helen Oyeyemi’s words) by Jung Yewon, who’s responsible for several other exciting recent translations, including Jang Eun-jin’s No One Writes Back and Jung Young Moon’s Vaseline Buddha.

The perennial debate about identifying translators is easily solved: just do it. Other publishers have warned me that putting a translator’s name on a cover will “put readers off”. But if this is true, isn’t it only going to be perpetuated if publishers act as though the fact of translation is something to hide?

As though “translation” signals stilted English and academic interest, as opposed to being what it is: a byword for originality and excellence. The English-language book market has a pitiful percentage of translated works. It’s nothing to shout about, but it does mean that only the very best gets through.

The book’s language It feels like preaching to the choir to be writing this in these pages. Eileen Battersby deserves a prize of her own, not only for the quantity of translated literature she reviews, but the quality of attention afforded them. If you can think of something to say about the book’s language, its rhythm, the variations of voice and tone on display, you’ve thought of something to say about the translation. And you might just make a translator’s day.