David Butler on writing his latest novel, City of Dis

A bout of depression, an addiction to theatre and Sean O’Reilly’s writing course were all essential ingredients to the creative process 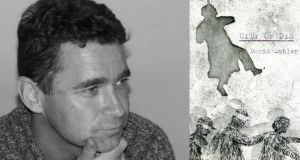 David Butler: Having a pair of embryonic texts to work on did much to cure the fear of the flashing cursor. If one plot got stuck, as often happened, there was always the other to fall back on

Like whales and elephants, novels can have long gestations. More than a decade has passed since voices, then characters, then individual scenes of what eventually grew into my two recent novels, The Judas Kiss (New Island, 2012) and City of Dis (New Island, 2014) began to haunt my insomnia. Indeed, an embryonic version of each novel was taken on by an Irish literary agent and sent out to American publishers as early as 2005, though neither was anywhere near ready for publication at that time.

Two eggs in the same nest, though very different in emphasis and tone, each novel is what might be termed Dublin noir, “first-person narratives inhabiting the borderlands of illicit desire and violence”, as I put it in a 2012 article for writing.ie.

Both texts were pretty much put on hold for the five years from 2005 to 2010 while I was lecturing English and Spanish literature full time. The same was largely true of a poetry collection, Via Crucis, which had originally been accepted for publication in 2005 by John F Deane at the Dedalus Press, and finally came out in 2011 under Noel King’s Doghouse logo (sadly no longer publishing).

Lecturing I loved, but it could do nothing to appease the nagging guilt at not writing that sometimes gets called a vocation. So I gave in. In 2010, I took the decision to leave off lecturing so as to give everything I’d written to date a thorough work-over and the best possible chance of leaving the nest of the hard-drive. As for new work, a collection of short stories had begun to take shape which grew into No Greater Love, published in London in 2013 by Ward Wood.

Having a pair of embryonic texts to work on did much to cure the fear of the flashing cursor. If one of the plots got stuck, as often happened, there was always the other to fall back on. And then there were the stories, and the poems. In fact, as a modus operandi, I’ve found that having something in a different genre to engage with has often got me out of jail in terms of the dreaded writer’s block. I wrote my first published novel, The Last European (Wynkin de Worde, 2005) while supposedly doing my PhD, and whenever that got jammed, I worked certain passages into poems. Likewise, a large chunk of my current work in progress, Under the Sign of the Goat, has evolved into a one-act play, Blue Love, to be performed in the Cork Arts Theatre this February.

The five years’ lecturing were, of course, a wonderful and unique opportunity to read deeply and widely. Also to think. Also to experience life. A bout of depression that lasted about four months was indispensable in helping me understand the characters of Chester Maher and Ciarán Crowe in City of Dis. Depression, and its devastating consequences for everyone with a stake in the victim of the debilitating affliction, was to becomes a major theme of the novel. There is still, it seems to me, an almost medieval stigma attached to issues of mental health which contributes to the sense of isolation and low self-esteem of the hundreds of thousands who experience them.

Indispensable, too, an addiction to theatre! Since 2010, besides haunting the entire gamut of Dublin’s many theatrical venues, I’ve acted, directed, gone on numerous acting courses, even designed and built sets. This hugely enjoyable activity has been invaluable in helping me get inside the head, and the unique voice, of the novels’ various narrators - a sort of ‘method-acting’ for the author. As with any good acting, in order to avoid caricature, flatness, and cliché, one needs to experience the loves, the rhythms, the drives, the prejudices of the character from inside their skin. Oh, it’s also kept me sane. Sitting on front of a nagging screen all day, tapping out and then erasing text, you begin to talk to yourself. Out loud!

I should add, City of Dis also benefited hugely from a novel writing course I attended at the Irish Writers Centre in 2010/11, facilitated by author Sean O’Reilly and organised through The Stinging Fly. Sean was absolutely exemplary in the generous allocation of time, energy and ideas he brought to bear on all of the works in progress. It didn’t do to be precious! The closing chapters in particular emerged far stronger from under the glare of the group’s collective critiques. And though he turned down the manuscript, Brendan Barrington of Penguin (Ireland) was also very generous in inviting me into the office to discuss the work in detail. Almost as we were speaking, Eoin Purcell accepted The Judas Kiss for publication at New Island, and on foot of that, City of Dis.

So where to next? Stories and poems continue to accumulate, and to be redrafted, compulsively. I’m (ever so slowly) breaking into the theatre, with a couple of one act plays up for production. There’s the early draft of at least one new novel sitting on the hard drive. But for my new year’s resolution, I’m hoping to attract an energetic literary agent. Suggestions, anyone?

Radical Wordsworth: Focusing on the ‘spots of time’ of poet’s greatest work
5