One of Ireland’s finest short story writers examines how Paul McVeigh developed his short story, What I Did On My Summer Holidays, into ‘a captivating and poignant book’ 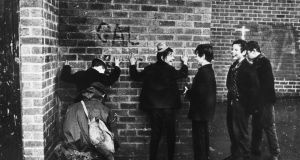 Schoolboys giggle while a soldier searches them in a street in Ardoyne, Belfast in 1971. The biggest difference from Paul McGrath’s short story is signalled in his novel’s opening sentence, writes Danielle McLaughlin: “I was born the day the Troubles started.” This is a marked recalibration of the lens from the “home” and “school” of the opening of the short story. In the novel, the Troubles are the backdrop. Photograph: Keystone/Getty Images

“I run home from school. I run the whole way. Well, except for the moments when I just have to stop because my chest feels like it’s going to explode and I get a strange taste in my mouth. I run and I create a force-field around me that will protect me if I bump into anyone or anything.”

It’s an opening full of energy and urgency, intense and immediate. It reels me in with its hint of crisis and is made all the more interesting by the fact that I recognise the boy running. I’ve met him before. He’s Mickey Donnelly, from Ardoyne in north Belfast, the protagonist of Paul McVeigh’s compelling debut novel, The Good Son. It’s a captivating and poignant book, which has been much praised for, among other things, its dark and irreverent humour and the distinctive voice of 10-year-old Mickey. But while the boy running is indisputably the same Mickey Donnelly, these are not the opening lines of The Good Son. They’re the opening lines of What I Did On My Summer Holidays, a short story McVeigh wrote some 15 years earlier that contained the seeds of what would, in time, become the novel.

The Irish Times recently republished What I Did On My Summer Holidays, and looking at the short story and novel side by side I can see that they have much in common. Fifteen years on, the Mickey Donnelly of the novel has all the vibrancy, all the wild imaginings, that he had in the short story; he has the same yearning to belong and to make friends. In both short story and novel, Mickey knows that he is different and the reader witnesses him being made to suffer for that difference. His love and adulation for his mother is central to both narratives and is in sharp contrast to his feelings for his father. The desire to escape, specifically to escape to America, is a constant.

It’s fascinating to see how scenes and passages from the story are woven into the novel: Mickey faking a limp to pass the Three Hard Men and their mutterings, Mickey’s out-of-control dash down the gigantic slope of the Bray, imagining himself “the world’s first Bionic boy, a boy barely alive. But we can rebuild him”. Fascinating, too, to see how certain scenes were built upon for the novel. When Mickey stands at the top of the Bray, looking out over Belfast and thinking about America, in the short story he has gone there alone, but in the novel it is part of an ill-fated outing with his father which provides insight into their unhappy relationship. Both story and novel illustrate McVeigh’s gift for dialogue, the novel edging ahead in this regard in the way that it embraces the vernacular. And while the story does contain flashes of humour, the novel, I think, is funnier.

How are they different? Well, there’s the length, of course, though I’m with Frank O’Connor when he says (in The Lonely Voice) that “the difference between the short story and the novel is not one of length”, or at least, it’s not only one of length. Certainly, when we compare What I Did On My Summer Holidays with The Good Son there’s more to it than that. The biggest difference is signalled in the novel’s opening sentence: “I was born the day the Troubles started.” This is a marked recalibration of the lens from the “home” and “school” of the opening of the short story; it is the novel setting out its stall.

In the novel, the Troubles are the backdrop against which Mickey’s personal struggles and family dilemmas play out. Their influence is felt not just in elements of plot, but also in language. The political conflict colours every aspect of Mickey’s life, from the name he gives his dog (Killer), to the school room where even the reading of a poem is a battle to be won: “he’s going to win me today. I can’t let him. Never let them win.” Saracens crawl down the street, there are snipers, bombs, men in balaclavas, and everywhere the reminder that Loose Talk Costs Lives.

In contrast, the Troubles don’t feature at all in the short story, where the only allusion to the political situation comes when Mickey notes triumphantly that English children get shorter school holidays. “Serves them right for invading our country,” he says. By focusing on one intense afternoon, What I Did On My Summer Holidays tells the story of a young boy becoming ever more conscious of the fact that he is different, that “some secret code was exchanged somewhere along the line” and he doesn’t have it. The Good Son also tells this story, but now McVeigh places Mickey’s struggles within the political context of the Troubles and Belfast in the 1970s.

What I Did On My Summer Holidays focuses on a few intense hours. The novel unfolds over the course of a summer, cleverly structured around a countdown of the “weeks till St. Gabriel’s”, the new school Mickey is due to attend come September. As the reader follows Mickey through this longer expanse of time, counting down the weeks with him, witnessing his trials and humiliations, we see how, gradually, he is driven to take action. It is daring action, and unsettling, and it requires the wider space of the novel, being graver and more dramatic and farther-reaching in its consequences than anything Mickey does in the short story.

What I Did On My Summer Holidays is a poignant story that bears witness to the hardship faced by Mickey. The Good Son explores what happens when that hardship becomes too much and Mickey decides he must do something about it.

Danielle McLaughlin is the author of Dinosaurs on Other Planets (Stnging Fly).