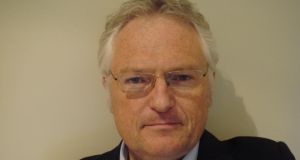 An only daughter, an only child.
Parents long separated, yet under one roof,
By death re-united, perhaps even re-acquainted.

I helped her go through things
After the funeral.
‘The family house’, she said, not ‘home’
Hinted at the permafrost
That chilled the place for years.

Like a sleuth in search of the final clue,
Lace curtains on the garden shed window.
Neat, clean.
I glimpsed for a moment lives of quiet desperation –
Sanctuary sought in a garden toolshed.

We quietly set to stowing the family silver.

As a child my mother,
Laden with shopping
Suspended from pram handles,
Used peel away from
The busy thoroughfare of Meath Street in Dublin
To visit a tiny grotto
Down a small side street
And lay her troubles
At the feet of a statue
Of the Virgin Mary,
Eyes clenched In ardent entreaty.

We were permitted
To light a solitary candle
As money was tight, very tight.

Those November evenings
Closing in early,
Lent a kind of magic to the place
Where the little shrine
Glowed in the evening gloom
Like a beacon of hope
For my mother and her cares.

Don’t Buy a Damaged One

It was the most extraordinary thing,
And it’s funny how well I remember it.
My mother, heavily pregnant
Went into hospital to give birth.
Amid the parting hugs and tears,
We were somehow reassured
That she would bring home
A little brother or sister – soon.

My brother, aged six, hastily emptied his piggy bank
And handing my mother the proceeds of the raid
Instructed her
‘Not to buy a damaged one’

Years later, my mother recounted
This tale. It never left her –
The idea that my brother
Could somehow know
That birth was a fraught affair
And things go wrong
On occasions.

Thirteen, pregnant.
Who’s the father?
The father?
Not a question, that’s the answer.

Born in 1960, Paul Balfe grew up in Dublin. He studied medicine at Trinity College Dublin and is currently a surgeon at St Luke’s Hospital, Kilkenny. Following a residential course a few years ago with Arvon in the UK, he recently completed a collection (as yet unpublished) from which these poems were taken.