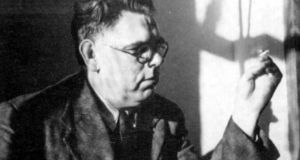 Máirtín Ó Cadhain borrowed from all Irish dialects, from Scottish Gaelic, from more than 1,000 years of Irish literature, and would make up words to suit the occasion

I never intended to translate Máirtín Ó Cadhain’s Cré na Cille. Nor can I say that it was imposed upon me. It was in my ears for years and yonks because I first read it unbidden as a first-year undergraduate and it blew my mind, and because later I taught it to graduates and to postgraduates as an Irish classic.

Ireland will have heard of it. It has been flagged as the greatest Irish novel, just as Ulysses is recognised as the greatest Anglo-Irish novel. These positions are not incontrovertible, but it would take a lot of argumentation and some prejudice to dislodge them. League-table renderings of merit in literature are always crass and stupid, but it is unlikely that both Cré na Cille and Ulysses would not figure in any list that any bilingual Irish person would read.

It is a novel in which all the characters are dead. They are buried in a graveyard in Connemara and continue with venom the disputes that sustained them in their previous lives. Their only sustenance is when a new corpse arrives to tell them about the latest tittle-tattle, scandals, suppositions, rumours and even occasionally the truth about what is happening “up there”.

It is a great novel because it is both traditional and modernist, old-fashioned and experimental. It is traditional and old-fashioned in that it deals with a settled “organic” community who care little or nothing about the outside world, and it is modernist and experimental because it breaks with all the easy and accessible conventions of a single narrator and lets the talking do the telling.

It also has, at its core, one of the great characters in Irish fiction. Catriona Paudeen is a harridan, a horror, a hag and a harpy and much more, and if she has any saving graces at all they are kept well- hidden. But around her in her grave are gathered her erstwhile neighbours, and just about everyone has something bad to say about everybody else.

Máirtín Ó Cadhain believed that talk was the best way to reveal character, and while there are so many people in this novel that it’s difficult to get a rounded picture of any, some become more prominent that others.

There is the huckster shopkeeper who will do anything to turn a few shillings; the bar owner who waters the whiskey; the schoolteacher who rails against his wife, who may be having a good time while he is dead; the guy who steals seaweed; the insurance salesman with the silver tongue who will turn any situation to his own advantage; the woman who discovers “culture” in the graveyard; and the men who argue about football.

It is a living conversation among the dead and it appears to be interminable. This gabble could go on forever, and maybe it will, but we will never escape from the narrow and the petty things that keep us alive.

The main challenge in translating this was how to render Ó Cadhain’s vivid and untempered idiom into something that might approximate its energy in English. Ó Cadhain’s language was largely from his own place, and this is particularly so in this novel, unlike some later stories. But like all writers, he was inventive. He borrowed and stole and pillaged from all Irish dialects, from Scottish Gaelic, from new inventions, from more than 1,000 years of Irish literature, and he also just made words up to suit the occasion.

I decided to do the same. If we are willing to forgo the tired official and journalistic English, which is as banal as a speech by some European bureaucrat and as dull as the prose of a hired public-relations plonker, then English has a rich and mad and savage demotic base. I tried to make use of this, while being mindful that the use of slang is a trap that can shut you up in less than half a generation.

I wanted to avoid the awful slop of bog Anglo-Irish gobs**tegook that nobody speaks any more, but to draw on more inventive Englishes, which are all around us.

Although much was against it, Irish had the advantage of not being squeezed into the corset of linguistic respectability, which gave it wings to fly, and it was a matter of accessing English of a similar freedom, which was certainly available but had to be sought out.

While I was working on this translation I was conscious of the spirit of Ó Cadhain growling somewhere near me. On the one hand he did want it translated, and on the other he was doubtful it could be done. I have no idea if he would be happy with this translation, but I like to think that he would, although I have no doubt that he would rail against a thousand phrases.

His own theory of translation, if he had one, which I doubt, was probably free-wheeling and creative. The interesting thing is that there will be another translation of the same book (published, also by Yale, next year) by Liam Mac Con Iomaire and Tim Robinson under the title of Graveyard Clay, and I have heard that this will take a very different approach to mine.

The thing is that no one paragraph from one language into another will be translated in the same way by any two people. Different approaches tell us that we see different things and hear different echoes from the words on the page.

I hope that these translations will introduce people to a great Irish classic and make them aware that we have a modern literature in Irish that is a worthy continuation of our 1,500 years of unbroken writing.