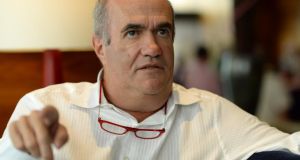 Colm Tóibín: “The Hawthornden Prize has a distinguished history. I am very proud that my book has been included in the list of winners of the prize.” Photograph: Frank Miller

Irish writer Colm Tóibín was presented with the Hawthornden Prize, one of literature’s oldest and most prestigious awards, for his novel Nora Webster at a ceremony last night in the London Library.

“The Hawthornden Prize has a distinguished history,” the Irish author said. “I am very proud that my book has been included in the list of winners of the prize.” Mary Mount, his editor, said: “I was delighted to hear the news that Nora Webster had won the Hawthornden Prize. Over the almost 100 years of its existence, the Hawthornden Prize has been awarded to many of the greatest writers of our time – Graham Greene, VS Naipaul, William Trevor to name just three – and it is wonderful, and fitting, to see Colm Tóibín join that list.”

Nora Webster has also been nominated for the Costa Novel Award and the Folio Award and is eligible for this year’s Man Booker Prize, for which Tóibín has been shortlisted three times. Unlike other prizes, there is no shortlist and the author does not know he or she is under consideration before being informed they have won. The film adaptation of Brooklyn, Tóibín’s previous novel, premieres in November.