Churchill & Ireland by Paul Bew review: close but no cigar

Winston Churchill’s long, complex, contradictory relationship with the Irish is explored in a new book. The conclusions are interesting if not wholly credible 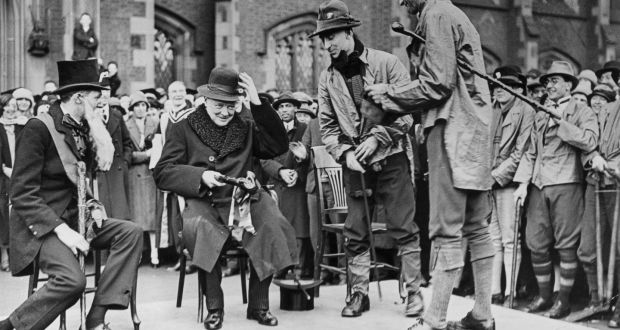 Paul Bew’s succinct and challenging overview of Winston Churchill’s complex relationship with Ireland maintains that he took Ireland more seriously than it took him – and that the Irish angle to his career is “the most neglected part of his legacy on both sides of the Irish sea”.

Praise for Churchill from the Irish side is rare; former taoiseach Garret FitzGerald was an exception in declaring him a personal hero; perhaps more representative of popular sentiment was an exchange from Hugh Leonard’s play, Da: “Sure what’s Churchill anyway, bad scran to him, only a yahoo, with the cigar stuck in his fat gob and the face on him like a boiled shite.”

From early in his career, Churchill wrestled with the Irish question both in public and private. As his political thinking evolved, he spoke in favour of Irish self-government and Irish unity, but such unity “depended on the wooing of Ulster, not its rape”. Bew is keen to emphasise that Churchill “was a strong and unwavering defender of what is called today the ‘consent’ principle as applied to Northern Ireland”. But as this book also underlines, the idea of an “unwavering” Churchill when it came to Ireland is problematic.

There is plenty of evidence that Churchill was determined to shape the relationship between the two countries. He was apt to pay tribute to Irish valour, soldiery and antiquity: “Ireland is not a daughter state. She is a parent nation. The Irish are an ancient race.” But there is also an abundance of correspondence and speeches suggesting that, in Bew’s words, “the Irish were beyond his comprehension”.

Churchill read up on Irish history to a greater extent than most of his contemporaries, but he also saw the Irish as a people who needed to be “managed” and dealt with “according to the consciences and conviction of the English people”.

He consistently displayed a failure to grasp the extent of local sectarian convictions in Ulster, or to appreciate the depth of unionist concerns. As a member of Asquith’s Liberal government, he wilfully stirred up the tensions that led to the Curragh crisis in 1914, when a number of British army officers in Ireland indicated their determination to avoid facing down unionist paramilitaries if requested. This raised troubling questions about the ability of the British government to rely on the army in Ireland to carry out government policy.

Churchill badly miscalculated and then framed a new narrative, conveniently forgetting the tone of his previous rhetoric, “dousing the fire he had himself sparked”.

Bew highlights Churchill’s various omissions, contrivances and miscalculations when it came to Ireland. He was first lord of the admiralty when 17,000 Irish soldiers were slaughtered at Suvla Bay and was so concerned with protecting his own reputation “that he did not face up to the significance of the event in Irish history”. He repaired his relations with Ulster unionist leader Edward Carson, but was too slow to see how quickly the political culture of Ireland had changed after 1916.

Churchill was unrelenting in his call for drastic measures, including hangings, during the war of independence, when he served at the War Office. His disdain for the IRA’s mode of warfare was visceral but “ignored the fact that for the weaker side in such a conflict there was no alternative”.

The consistent tendency to lose control of his rhetoric was also apparent at this time. In his constituency of Dundee, he asked: “Could a republic be given to a miserable gang of cowardly assassins like the human leopards of East Africa?” Still, Bew suggests, he wanted to negotiate with Irish republicans “more quickly than most”.

Bew is on shakier ground in asserting that Churchill shared with the Irish “a temperamental affinity. His use of language was designed to stimulate rather than sedate,” and that admiration of intensity of purpose and action “linked him temperamentally” to Michael Collins. Both shared “similar manic depressive temperament”.

This latter assertion is farfetched, not backed by convincing evidence and borders on the psychobabble. Collins’s most recent biographer, Peter Hart, observed that Collins and Churchill came to “loathe each other, Churchill’s posthumous compliments notwithstanding”.

As secretary of state for the colonies, Churchill did try to bed down the Anglo-Irish Treaty. With the attack on the Four Courts in June 1922 that began the civil war, Churchill’s policy had “effectively triumphed.” But he was then to endure his period in the political wilderness. He had not considered the possibility of a de Valera comeback, and in 1938 railed against the London agreements, which included the return of the “Treaty ports” to Ireland.

Churchill’s fears about that agreement were “absolutely justified”, but they were dismissed as the ranting of an “isolated, eccentric figure”. In Ireland he was by now regarded as irrelevant.

Irish neutrality infuriated Churchill. By 1939, now back centre stage as first lord of the admiralty, he had advised the cabinet “to take stock of the weapons of coercion” and take back Berehaven, one of the Treaty ports. As war-time prime minister, he was prepared to offer a British declaration accepting the principle of a united Ireland but remained “consistently irritable” about Ireland: “We must save the people from themselves” he wrote to Atlee.

However, Churchill, as always “underestimated the strength of anti-British sentiment in Ireland”. This highlights the difficulty of convincingly arguing that he had a much more sophisticated approach to Ireland than his contemporaries.

After the end of the war, Churchill’s speech denouncing Irish neutrality underlined his ignorance, especially the contention that the actions of de Valera were “so much at variance with the temper and instincts of southern Irishmen”.

He came to realise that the tone of this speech was bitter and spiteful, which he regretted, and was “soon to go out of his way to send warm messages to Dublin”. But the 1948 declaration of the Irish Republic prompted his assertion that partition was now permanent.

There is little doubt that Churchill was opposed to forcing unionists into a united Ireland, but “it is clear he would have been delighted if they had been successfully persuaded”. He did not desire to see partition last, but when he was chancellor of the exchequer in the 1920s he was effectively responsible for underpinning it by breaking the British treasury consensus that Northern Ireland should pay for its own upkeep.

The author suggests that Churchill would have hated The Irish Times obituary on his death in January 1965 because it referred to his long, “unhappy” relationship with Ireland. Therein lies the problem in discovering who, in Bew’s words, “the real Churchill” was.

Bew’s assessment is valuable because, despite the firm pronouncements he makes at the outset of the book, he does not ultimately attempt to gloss over the contradictions and paradoxes of Churchill’s relationship with Ireland. His was a mind saturated with imperialist assumptions. And while Churchill seemed, at different stages, to be prepared to evolve his thinking, self-serving political requirements and calculations invariably dragged him back.

Diarmaid Ferriter is professor of modern Irish history at University College Dublin. His book A Nation and Not a Rabble: The Irish Revolution 1913-23 is published in paperback by Profile