Choice of real and imagined worlds for young readers 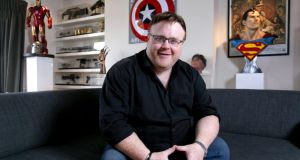 One of the most eagerly awaited of Irish children’s books of recent months is now with us in the form of Derek Landy’s Demon Road (HarperCollins, £12.99). With the hugely popular series of nine Skulduggery Pleasant titles behind him, what direction might his writing now take? His numerous fans will be glad to know that this new work, while featuring a totally different cast, retains a great many of the thematic and stylistic features that have endeared him to his followers.

But, equally, they should enjoy his exploration of new territories, complete with a diverting assortment of new characters drawn from both real and imagined worlds.

Always attracted to what HP Lovecraft diagnosed as the “current of weirdness” in Irish literature, Landy shows no diminution of his fascination with what he himself, in a dedicatory note to Demon Road, describes as “the myriad delights of horror”. The “delights” to be savoured here are in plentiful supply, and horror enthusiasts will respond to their inventiveness and variety.

The pacing of the narrative is such that events proceed in almost breathless succession, resulting in a novel that, over its 500 pages, can read rather like a sequence of highly charged and often quite gory episodes. The witty, quick-fire banter of many of the exchanges in his Skulduggery novels is still a recognisable Landy presence, although, overall, to a lesser extent.

In terms of structure, Landy’s novel employs the popular motif of the road trip, taking us on this occasion from Florida to Alaska and to many halting points on the vast American landscape between.

The cinematic evocation of this background is one of the book’s greatest strengths, being at once elegiacally poetic and suggestive of the dark, sinister forces which Amber, our 16-year-old heroine, must come to negotiate.

Fleeing from parents whose bloodthirsty intentions towards her are bluntly stated in the novel’s arresting opening sentence, this young woman (able as required to “shift” into a being of horns and razor claws) is on a remarkable voyage of discovery of the macabre underbelly of American life. With her driver – “some lunatic called Milo” – and fellow traveller Glen, a delightfully obtuse Irishman, she shares a vehicle, a 1970 Dodge Charger, “a streamlined behemoth of black metal”, endowed with sufficient personality to be a character in its own right.

Intended as the opening volume of a projected trilogy, with the two remaining titles due to appear at six-monthly intervals, Demon Road evinces Landy’s skill in drawing on the conventions of literary and film horror to entice his readers into his own “current of weirdness”. The strap line on the book’s cover proclaims, of its principal character, “She’s having a hell of a time”. So, one imagines, will its many readers.

The “hell of a time” that was the Ireland of 1916 has served as subject matter for a considerable body of children’s fiction, focusing mainly on events occurring in Dublin and in the process, inevitably perhaps, giving rise to some stereotyping of character and incident. All credit, then, to Sheena Wilkinson’s Name Upon Name (Little Island, €8.99), set in Belfast over the months between January and May of the year, and focusing much less on military engagements than on the devastating and disruptive repercussions of the strife on the family, or more precisely the families, at the heart of the narrative.

We follow the evolution of events from the perception of 14-year-old Helen Reid, daughter of a Protestant schoolteacher father and a Catholic mother. “The two halves of her family, the Reids and O’Hares,” we are told early on, “had never had much in common”, the differences being accentuated when developments in Ireland and the wider Europe begin to emphasise conflicting ideologies and loyalties.

Helen, a bright young woman, is in tune with the “new” thinking on the role of women in domestic, political and educational contexts: further familial dissensions and tensions are created, especially between her and her mother. But it is in trying to confront the issues which seem to divide her two sets of cousins in their clashing notions of patriotism that Helen’s judgments are most rigorously tested. As she says at one point, “I mean, I know I get good marks [at school] but how can I be bright when I don’t understand anything?”

With its Yeatsian title and epigraph, Wilkinson’s novel aims high in its literary aspirations and, as its carefully and subtly crafted plot demonstrates, addresses them more than adequately. The key to its success lies in its portrayal of its heroine, caught up in a world whose puzzling assumptions defy, for the moment at least, rational explanation. As George, her Quaker classmate, reminds her, “Things aren’t as simple as you might think” – least of all in the Ireland of 1916.

Move 40 years on and we find ourselves, in Ursula Dubosarsky’s The Red Shoe (Walker Books, £6.99), in the Australia of the 1950s. Talk of recent wars is still much in the air and we watch a family of mother, father, three daughters and a visiting uncle under threat of being torn apart as external world events impinge on domestic circumstances.

Supplementing her narrative with reproduced newspaper reports of the time, Dubosarsky offers a beautifully written commentary on the dynamics of a family where adults suppress truths and children are left sadly perplexed.