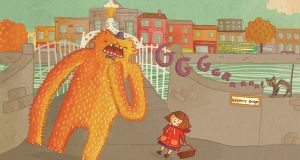 A Dublin Fairytale: a troll on the Ha’penny Bridge in Nicola Colton’s picture book

With its simple but quirky illustrations, this year’s treat for young Dubliners is, unquestionably, illustrator Nicola Colton’s first picture book, A Dublin Fairytale (O’Brien, €12.99). In her red raincoat, Fiona makes her way to the witches’ market on Moore Street to make a special brew for Granny, traversing a city featuring familiar landmarks with magical twists. Giants lurk in St Stephen’s Green, trolls guard the Ha’penny Bridge, and all the while an ominous figure follows Fiona on his bicycle. There is perhaps a touch of class snobbery in the depiction of the big bad wolf as a wearer of tracksuits and hoodies, but by the end of the story everyone is friends and will live, we hope, happily ever after.

Sarah Gibb’s Sleeping Beauty (HarperCollins, £12.99), part of their “Best-loved Classics” series, is a more traditional fairytale retelling, but the elegant illustrations – particularly when Gibb uses a cut-out effect for the more eventful scenes – make it an edition worth owning. Meanwhile, the highly-anticipated collaboration between Eoin Colfer, our current Laureate na nÓg, and Oliver Jeffers, one of our finest picture book artists, Imaginary Fred (HarperCollins, £12.99), offers up a complex and layered story about friendship and imagination. The titular Fred is an imaginary friend, ready to be called into action when “the conditions are just right”. When befriended by Sam, he prepares himself for the day he’ll no longer be needed: most people seem to eventually move on to the kind of friends other people can see. Jeffers’s distinctive style is muted here slightly, with most of the illustrations in black and white only, but his pixelated depiction of the imaginary community – the only characters to appear in colour – is cleverly done. Colfer’s text is as quirky and – when needed – poignant as one might expect, with his capacity for fine storytelling on full display here.

Zaniness of a different shade can be found in an alphabet book with a difference, Take Away the A, by Michael Escoffier and Kris Di Giacamo (Andersen, £7.99). What happens when key letters are removed from words? The chair has hair, bears stay behind bars, plants hide their pants. The slightly surreal scenarios accompanying each “what if” make this a silly but smart introduction to wordplay.

Slug Needs A Hug! by Jeanne Willis and Tony Ross (Andersen, £11.99) will also appeal to young readers (and parents) in need of a laugh. Rhyming text and bright, bold illustrations take us through poor Sluggy’s quest to become more huggable, including the donning of a woolly hat and false beak. This kind of humour is often key in picture books, and in When Dad Showed Me The Universe (Gecko Press, £10.99) by Ule Stark and Eva Eriksson, translated from the Swedish by Julia Marshall, the opportunity for a few chuckles along the way saves the narrative from becoming too sentimental. The gentle pencil drawings and a father determined to show a child the beauty of the entire universe might seem a little solemn at first – but objects and creatures both big and small have their place in this tale.

Young, independent readers will be delighted with the newest instalment of the Nightmare Club series, Brain Drain Baby (Little Island, €5.99). Dave Rudden is the latest of a number of Irish authors, including Oisin McGann and Deirdre Sullivan, to don the mantle of “Annie Graves”, whose slumber parties require a spooky story to be told. How scary can a baby sister be, though? Rudden’s earnest narrator and Glenn McElhinney’s ominous illustrations will reassure all elder siblings that they are quite right to mistrust new arrivals in the family – and the pleasing naughtiness of phrases like “the little smushface baby invader of my home” are bound to resonate.

For the slightly older reader, Michael Morpurgo’s An Eagle in the Snow (HarperCollins, £12.99), enriched by Michael Foreman’s illustrations, will be familiar territory: once again he has drawn on real-life wartime events to inspire and inform his fiction. This latest novel is inspired by an urban myth about Henry Tandey, a much-decorated first World War veteran who, at the war’s close, held off on shooting an enemy soldier – a soldier who would go on to become leader of Germany and spark the next war. Morpurgo filters the tale through 10-year-old Barney, journeying with his mother to stay with relatives in 1940 after their world has become a “place of rubble and ruin”. When German fighters attack their train, a mysterious stranger distracts them with a story as they shelter in a tunnel. An Eagle in the Snow has the feel of a classic already: quality storytelling, with the impact of war on both soldiers and citizens explored, and an ethical dilemma offered up without offering easy answers. An afterword at the end links the fiction with the facts, and will appeal to any lovers of history.

Finally, for teen readers, Rainbow Rowell’s Carry On (Macmillan, £12.99) builds on the story-within-a-story referenced in her previous novel Fangirl, relating the adventures of fantasy hero Simon Snow and his escapades at the Watford School of Magick. The scope of this novel allows Snow and his world to grow beyond their original incarnation as an affectionate Harry Potter parody, although part of the joy of Carry On certainly is its playful engagement with and questioning of fantasy tropes. Rowell’s gift for thoughtful characterisation and her resistance to classic heroic journeys make her magical world feel realer than many, and the alternating narrators and authentic dialogue move the story along briskly. If you read one tongue-in-cheek magical romance between a mage and a vampire this year, let Carry On be it.