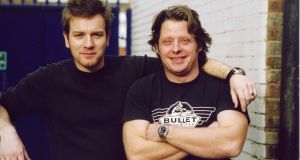 Settling down to talk in his characterful front room in Barnes, a riverside area of London untroubled by a Tube station and the footfall it brings, Charley Boorman’s phone buzzes. It’s the hospital, calling to confirm the next day’s operation to remove bolts from his leg.

It’s an annoyance, he explains afterwards, as he wanted to attend a testimonial dinner for English rugby captain Dylan Hartley.

“Yeah but it’s my tenth operation,” he groans, the only time he’s anything less than exuberant during our meeting.

I’ve no retort; the very reason we meet is to discuss his painfully slow, painfully long and, well, painful recovery as documented in the biography Long Way Back. Since breaking three of his four limbs in a spectacularly nasty motorbike accident in Portugal a year ago, the professional enthusiast has been forced to put his life on pause, including scrapping a motorcycle tour of Australia and a TV show – a career move which followed from the initial success of 2004’s Long Way Round, his series with his friend Ewan McGregor.

“After a month in hospital, I came back here, and we put a bed where my daughter is now,” he says, pointing past the open-plan kitchen in the throes of refurbishment, to a day room where after-school telly is blasting.

The area where his tibia broke and tore through the skin is a smooth, angry pink.

“I slept there for months. The worst time was at night, after a particularly sh**ty day. With rehabilitation, you take one step forward and two steps back so sometimes I’d wake up at four or five in the morning, and get depressed. I’d feel awful, I’d think why me? What if I had left two seconds earlier or two seconds later? What if I’d hit the hedge instead of the wall? But I quickly realised you don’t get anywhere by thinking that.”

Upon request (call it morbid fascination), he uncovers his scars by peeling up his jeans to his knee. The area where his tibia broke and tore through the skin is a smooth, angry pink. The bolts that need removing appear as taut bumps under the skin. Deep pockmarks dot the rest of his calf, charting where cage wires went through his leg to keep a metal rod in place.

“I’ve had lots of crashes before, but this was just brutal because of the way I hit the ground,” he says. “If I’d broken one leg, it would have all been straightforward because I could have gotten up on my other leg and carried on, but because I broke both my legs and my hand, that’s what made it so difficult.”

The only positive is that the free time and the period of reflection paved the way for the biography. Much of it recalls his childhood in Co Wicklow, where he found his love of motorbikes.

“I had a wonderful childhood, looking back on it,” he says, quite wistfully. “I remember being very free in Ireland. [Back then,] Ireland was, relatively, a third-world country. The roads were terrible, but me and my neighbour Kaz used to fill a spare petrol tank and just ride into the mountains until we ran out of petrol, then fill it up again and ride down.

“Unlike London or other big cities, there’s a great tolerance for motorbikes in Ireland. Culturally, it’s quite different.

“I don’t have as many friends there as I used to, but my dad is still there, so I go back around three times a year.”

Another house in London was an option, as was LA, but as he drove around Co Wicklow he came across an auction at an estate agent’s office and stopped.

His father is film industry veteran John Boorman, who moved to Annamoe, Co Wicklow, with his wife, Christel, and four children in 1969, a few years before making his Oscar-nominated film, Deliverance. Describing their home as “a large old house and grounds that included meadow and pasture, with a river running through it”, Charley explains in Long Way Back that his father bought it during an out-of-body experience.

He writes: “He had sold his place in Putney for £10,000 and wasn’t sure where he wanted to live. Another house in London was an option, as was LA, but as he drove around Co Wicklow he came across an auction at an estate agent’s office and stopped.

“It was 1969, I was only three, and as Dad stood at the back of the crowd, watching the bidding, he seemed to escape his body and floated up to the ceiling from where he watched for a while longer before slipping back into his body again. Only then did he realise one of the bidders was him.

“He’d bought the property without knowing that was his intention when he walked in. He describes it [as] a surreal moment in his life when he didn’t know he was moving to Ireland at all.”

So began a charmed relationship for both the Boormans and for the Irish film industry: cinema produced in Ireland by Boorman include Excalibur, The General and Zardoz. So when asked if they experienced any anti-English sentiment, Charley cites his father’s reverence as the reason for their honorary status.

As a child, his father’s occupation meant that Charley earned bribes, and later motorcycle money, by working as an actor in his father’s films

“I think people saw him as someone who did good things for Ireland,” he says. “If you looked at all the Irish actors in Excalibur alone – Gabriel Byrne, Liam Neeson – there was a whole gaggle of Irish actors who’ve gone on to become stars, so Dad was really part of that,” he says.

As a child, his father’s occupation meant that Charley earned bribes, and later motorcycle money, by working as an actor in his father’s films, most notably The Emerald Forest, a jungle abduction story. It also meant that their Wicklow home welcomed creative luminaries: family friends to drop by included Tom Stoppard, Jon Voight, Lee Marvin and Sean Connery.

“Dad made Zardoz with Sean [Connery], and he stayed with us during the filming. He paid Mum rent each week,” Charley laughs. “Sean came from an incredibly poor family so, for him, it was all about paying your own way. Mum used to laugh and tell him to stay, but he’d insist, and counted out the money every week.

“He really has something. Of all the people Mum met, whenever Sean walked in the door, she’d go weak at the knees. I’ve known him all my life, his son is probably my best friend, and when he walks into a restaurant, the whole room turns around.”

If this sounds like a comfortable life for Charley Boorman, it hasn’t always been. When Long Way Round was first mooted, he reveals in his book that he was down to £4,000 of savings from his work as a painter and decorator, with he and his wife, Olivia, raising their two young daughters, and planned building works to their home only adding to the financial pressure.

People don’t want a beach holiday now, they want an active holiday followed by a few days on the beach.”

His biker pal McGregor was solvent after his role as Obi-Wan Kenobi in Star Wars: Episode II, and what ensued was a 31,000km round-the-world bike trip that became a public enterprise involving two TV series, books and DVDs. It would later lead to Boorman working as a TV presenter, tour leader, speaker and motorbike ambassador.

Thirteen years on, why does he think that show struck a cultural nerve?

“It’s hard to say but I think we were riding on the crest of a wave because adventure travel had just taken off,” he says. “Sometimes it’s just luck, and the show came out at a time when there was a thirst for that. People don’t want a beach holiday now, they want an active holiday followed by a few days on the beach.”

With no qualms about returning to the world of celebrity motorbiking now he’s mostly back on his feet, their long-mooted third instalment, Long Way Up (journeying from the tip of South America to the top of Alaska), is still on the cards.

“We’ve spoken about it, but we’ve thought about doing it when we’re much older, as two grumpy old men,” he explains. More imminently he’ll return to work with a motorbike tour of Africa in August. Inevitably, talk turns to travel, which turns towards Brexit.

“I don’t think Brexit will make that much difference. When you go to France on the Eurotunnel, you have to show your passports anyway, and once you’re in Europe, you can go anywhere you want,” he says, with more on-the-ground experience than most.

“I worry for my children, because the younger generation voted to stay in but will have to live with the consequences of leaving. It’s a shame a huge number of young people didn’t vote. They could have made us stay in, probably.

“But we’ve triggered Article 50 so what’s relevant now is that we all get together and work towards Brexit, because that’s where we’re going. I don’t think changing government in this general election will affect that. Who are the real candidates anyway? There’s only one real candidate. Unless you want Corbyn.”

Does he have an Irish passport that might come in handy? “I don’t,” he laughs. “But I wish I did.”

Long Way Back is published on May 1st.