‘Character is everything’: Kelly McCaughrain on judging the Caterpillar story prize

If your character can take me on their emotional journey, I don’t care if they’re in space, a Tudor castle or a Pizza Hut, I’ll be hooked 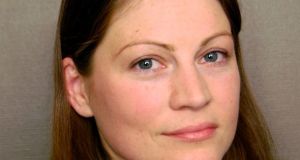 Kelly McCaughrain: Children are idealists and optimists, and characters in children’s and YA fiction often have much more interesting and ambitious goals than characters in adult fiction.

The Caterpillar Story Prize, an annual competition run for adults writing short fiction for children (aged 7-11) is being judged this year by Kelly McCaughrain, whose book Flying Tips for Flightless Birds, recently won Children’s Books Ireland Book of the Year and Children’s Choice and has been nominated for a Carnegie Medal. She has been shortlisted for the Times Chicken House Children’s Fiction Prize and is a former recipient of a Moth Short Story Prize. McCaughrain volunteers with Fighting Words Belfast and was recently appointed Children’s Writing Fellow for Northern Ireland.

Ahead of the closing date (September 30th) of The Caterpillar Story Prize, we asked Kelly what prompted her to write and what she’ll be looking for in the winning story.

Did you always want to write fiction for young people?
It wasn’t my intention until I first attempted a novel in my mid-20s and quickly realised that I was more interested in the teenager in the story than the other characters. Years later, the setting for that novel became the setting for Flying Tips for Flightless Birds. I don’t read or write children’s books “with children in mind”, I read and write them for myself. I think the best ones offer as much to adults as to children.

When and where do you write? Do you have any writing rituals?
I write in my garden (with parasol, hat and hot water bottle on rainy days). In winter I’m forced indoors to my sofa. I’d love to go on a writing retreat, but I worry they’d put me in a room with a tiny window and no view and I’d never be able to write in there. I hate being inside. I’ve been given an office in the Seamus Heaney Centre at Queen’s for the duration of my post as Children’s Writing Fellow and I’d like to try and train myself to write in there, but I could well be huddled up in my greenhouse in December again.

I also like quiet. I have a slight bugbear about the falling number of quiet spaces in our society. Even libraries aren’t really quiet anymore, until you get to university. I worry about kids who are like me and need quiet and don’t get much of it.

What do you think the future of children’s fiction look like?
I think if you want to know what will rise to the surface of children’s fiction in the future, then just look at what kids are interested in now. I think (and hope) we’ll see a lot more books about climate change and political responsibility, for example, and maybe more experimentation with format. I love verse novels; I think they’re especially good for kids who crave something a bit more experimental or who are intimidated by a 60,000-word book. I think short stories could do something similar, but they seem to be an undervalued and underdone genre and I don’t really know why. I’d love to see more of them in the future, so I’m really pleased to be judging this competition.

What can adults learn from children’s stories?
The same things as children learn. Apparently someone did a study and found that people who’d read Harry Potter were more likely to dislike Trump, probably because of the pro-tolerance themes of the books, which I thought was a brilliant example of how childhood reading has the potential to actually shape a whole society. Interestingly, the Harry Potter movies didn’t show the same correlation.

Children are idealists and optimists, and characters in children’s and YA fiction often have much more interesting and ambitious goals than characters in adult fiction. There’s a moral responsibility in writing for children. You don’t want “the moral of the story” to be in your face but you can’t publish something that’s morally ambiguous or morally questionable and I think that this accords with how children view the world. They are not interested in the small and the petty. They are interested in what is true, what is important, what is fair. We could do worse than to pay more attention to these things.

What would be your top tip for someone writing their first story?
Dive in! Allow yourself to fail (hideously, catastrophically, irredeemably), and know that you are on your way. Success may be far down the road but since we haven’t yet invented teleportation, you have to put in all the steps between here and there. Enjoy those steps. Don’t ruin the walk by worrying about being any good at it. Some day you will be.

What were some of your favourite books from the last year?
It’s hard to choose but recently I’ve loved No Fixed Address by Susin Nielsen, Tin and Póg by Padraig Kenny, Noah Can’t Even and Noah Could Never by Simon James Green, Mud by Emily Thomas and The Skylarks’ War by Hilary McKay. I think what they all have in common is an emphasis on heart-warming, convincing characters who carry the story, while the plot is a simple and believable backdrop to an emotional journey.

What will you be looking for in The Caterpillar Story Prize entries?
My young writing group are sick of hearing me say, “But character is everything!” but I do believe it. If your character can take me on their emotional journey with them then I don’t care if they’re in space or a Tudor castle or a Pizza Hut, I’ll be hooked. “Emotional” does not have to mean high-drama or sentiment, I think it just means psychologically credible.

I honestly believe short stories are harder than novels, because you don’t have 200 pages for rambling conversations to bring characters to life. But they also offer some freedom in that you don’t have to get hung up on back stories and subplots and minor characters and you have the opportunity to present something very impactful, unusual or experimental without having to sustain that for 200 pages. I’d love to read something that opens my mind in some way – to an idea, to a style of writing, to someone else’s experience. I’m sure they’re going to be fantastic and I can’t wait to get stuck in.
The Caterpillar Story Prize closes on September 30th. For details on how to enter go to thecaterpillarmagazine.com. The winner will receive €1,000 and their story will be published in the winter issue of The Caterpillar.