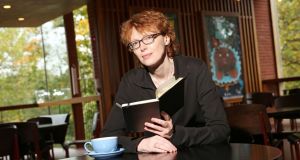 “How could anyone forget him from the TV screen in the 1970s and 1980s, hunched, swift, stalking, surveying the green-baize plain, his nostrils quivering…all lean muscle and bar room pallor…” Rosemary Jenkinson’s narrator describes a late-night meeting in Belfast with the ageing, ailing “working-class hero” Hurricane Higgins in “Revival”, the first story in her third collection, Catholic Boy.

“Revival” displays all of Jenkinson’s trademarks: an elegant wit, terrific characterisation and absolute sense of her own particular Belfast. The predatory “sexual, loose-limbed” Higgins has a lot in common with several of Jenkinson’s narrators who could be versions of Shakespeare’s Rosalind from As You Like It, independent witty women who roam the bars of Belfast in search of sexual adventure. “I liked hunters. I understood them because I was one myself. We all wore our scars invisibly but could sense them in each other. Hunting within the boundaries of society was known as pulling,” says Emma in “Love Histories”. Alex Higgins billiard’s cue might be represented by Rosalind’s boar spear but Jenkinson’s narrators’ only weapons are their wit, their forest of Arden the streets backed by the hills and rainy Belfast skies.

An acclaimed playwright, Jenkinson knows about playing parts, her red-haired “DSS person” announces in “The Art of Mendacity”: “People have told me that I look like a young Vanessa Redgrave which may explain the acting ability.” Redgrave’s portrayal of Rosalind is legendary but Jenkinson is far too subtle to hammer in a reference and there is so much more going on anyway. The charm is that the reader is allowed the space to roam freely alongside characters who never take themselves too seriously, “Of course I’ve also been told that I look like the gay man out of Hollyoaks”.

Her “DSS persons” and “dolies” don’t take work very seriously either. In fact some of the funniest moments are when these characters clash with authority whether it is Caroline of the cream sofa in “The Art of Mendacity” or the housing benefit woman inspecting rented accommodation in “Paper Piranhas” to ascertain the protagonist’s relationship with her landlord. Each bedroom even the contents of the kitchen cupboards are inspected in detail, “’Do you ever have meals together?”.

Changing clouds are a recurring metaphor for a city as mercurial as its protagonists. In “One City, Two Tours”, sectarianism is reflected in the rivalry of Catholic and Protestant tour companies: “Turning into his street, he could see the sun was being squeezed between the vice of cloud and hill, seemingly pinched in its anvil.” After a physical scuffle on the street, Glen the tour guide “hardly saw the passengers, the act of violence, the cruel words still pumping through him, but he managed to talk about the city as if peace was all it knew now”.

‘The Lough’ highlights the powerful haunting of the Disappeared while the uneasiness of an uncertain peace as the backdrop for jaunty adventures makes for rich complications when Ruth the protagonist “pulls” Jarleth, a young Catholic boy in the title story. “There were always two voices in Ruth’s head commenting on her actions-one the rather anxious voice of reality and the other rehearsing for later performance.” At the end, Ruth “hurries up the Limestone Road past the meshes denoting the peace line that grew taller every summer…she felt the truth behind all points of view. The trouble was it made her doubly angry instead of tolerant.” Jenkinson doesn’t preach, she’s profoundly playful, making her subtle warnings doubly potent, “Up in the stark branches of a tree, a nest rocked like a cradle.

Martina Evans is a poet and novelist. Her books include “The Windows of Graceland” and “Now We Can Talk Openly About Men” which is due from Carcanet in May 2018