Browser: US political satire that tugs on the heartstrings

Brief reviews of Enter The Aardvark byJessica Anthony; The Voice in My Ear byFrances Leviston, Annelies by David Gillham; Carrying Fire and Water by Deirdre Shanahan; The Authenticity Project by Clare Pooley; Trump and the Puritansy James Roberts and Martyn Whittock 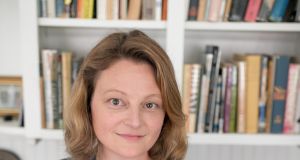 Alexander Paine Wilson is a Republican congressman set on re-election. But the arrival of a stuffed aardvark becomes an unlikely stumbling block. Woven throughout Jessica Anthony’s addictively witty narrative is the conceit that we live in an age in which everyone speaks too much and reflects not enough. What better lens to examine this notion through than the rhetorical minefield that is modern politics? As any satirist worth their salt these days must, Anthony has realised that the times we live in are already a kind of cosmic joke. What marks her latest work out as original and insightful is her narrative style, and the emotional core she sustains at the heart of the US congressman’s story. Fresh, astute and mouthwateringly sharp, this is a rare thing; a political satire that tugs on the heartstrings in unconventional ways. – Becky Long

The Voice in My Ear
by Frances Leviston
Jonathan Cape
There’s something about Claire, but who is she? Does Claire even know? The Voice in My Ear, debut fiction by award-winning poet, Frances Leviston, tells the story of 10 different Claires. Each story is striking; in one a sex-denied boyfriend becomes obsessed with the lascivious diary of his frigid lover. In the surreal, Muster’s Puppets Presents a B&B host is convinced her family are duping her by morphing into puppets. While each story is different and each Claire distinct, they share key personality traits. Each Claire is an intellectual, unafraid to be disliked, her relationships are fraught with complex power dynamics – most importantly with her mother. But is Claire’s mother really a monster? Claire’s perception does not always square with other versions of reality. An insightful portrait of the interior life of a contemporary “Claire”. – Brigid O’Dea

Annelies: A Novel of Anne Frank
by David Gillham
Penguin, £8.99
What if Anne Frank had survived? Gillham’s tale is touching but unsentimental and Anne retains the indomitable character of the girl whose war-time diary many of us read as teenagers. Following her incarceration and liberation from the inhumanity of the Bergen-Belsen concentration camp, and the deaths of her beloved mother and sister, Anne continues to be impetuous and headstrong. She despises forgiveness, has only stinging words for her grieving but practical father, her own grief turning to a simmering rage at the world. But hushed conversations with her spectral sister accompany her like a conscience as she navigates peace time and allows herself again to dream of becoming the writer she longed to be as a 13 year-old hiding with her family in occupied Amsterdam. – Claire Looby

Carrying Fire and Water
by Deirdre Shanahan
Splice, £8.99
A woman dwells fleetingly on the longing to have a child; another copes with the loss of a lover as she cares for her ailing father and remembers her dead mother; another, following a miscarriage, has come for a meditative holiday to Normandy; another, who’s had an affair with a married man who’d eventually left his wife but the relationship hadn’t worked out, is also on a holiday of recovery; another, home from Japan, visits with her ailing mother an uncle who’d abused her as a child and takes a subtle revenge; another has joined a convent following an abortion and the break-up of a relationship; another mourns the loss of her child. Their stories are beautifully told in image-rich, powerfully descriptive language and an elegiac tone. – Brian Maye

The Authenticity Project
by Clare Pooley
Bantam Press, £12.99
Julian, who’s really 84 and not 79, decides to write his truth in a little green notebook, not realising that this simple act will change his life and the lives of those around him. The central premise of Clare Pooley’s novel is compelling and clever; various characters are given their own chapters and viewpoints as the reader gradually builds a relationship with each, and gains a sense of the emotional weight of the truths they might share. The authenticity aspect of the project is closely linked to emotional freedom and empowerment. Her cast of characters is varied and relatable, as Pooley skilfully negotiates their interactions, and while her language occasionally lacks flair and falls a little flat, the narrative’s uplifting and heart-warming qualities are undeniable. – Becky Long

Trump and the Puritans: How the Evangelical Religious Right put Donald Trump in the White House
by James Roberts and Martyn Whittock
Biteback Publishing, £20
The foundations of the highly influential contemporary American evangelical right go back to the time when English Puritan settlers set up a “godly” colony in the uncharted New World. They brought belief in self-determination, the individual’s right to strive and prosper and the faith that God had chosen them for this path. November 2020 marks four centuries since the landing on the eastern seaboard, and the significance of that anniversary will not be lost on US voters. Roberts and Whittock methodically and clearly trace the influence of various evangelical groups on the development of American society, right up to the present day when they have the power to enthrone a White House incumbent who appears to embody the very opposite of the values they espouse. – Claire Looby