Breaking their silence: women tell their stories of the Troubles

The courage, integrity and honesty of these women telling their intensely personal stories cut through politicians’ rhetoric and offer a cathartic and uplifting experience 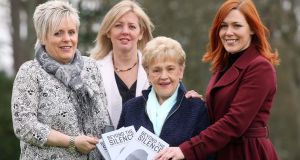 “There is no greater agony than bearing an untold story inside of you,” the poet Maya Angelou once said, and considering the immense depth of the stories I have been privy to in recent times, I’m inclined to agree.

Hundreds of people braved heavy rain on International Women’s Day to attend the launch of a new collection of stories, Beyond the Silence, at the Ráth Mór Centre in Derry. Nervous participants met for the first time at the launch, too, ready at last to share their intensely personal stories with the world.

Arising from the oral history strand of Creggan Enterprises’ Unheard Voices Programme, this collection focused solely on the experiences of women – who, historically, have remained largely silent on the past. Aware that women could be key to peacebuilding, our aims were simple – to ask and to listen – a challenge which immediately drew me in as its editor.

We specifically sought to secure women who would run a mile from projects like this one; those who perhaps suffered, directly or indirectly, because of conflict and who may feel isolated and marginalised within their own communities. In all, 28 women from diverse backgrounds shared their stories with Unheard Voices’ co-ordinator, Carol Cunningham, and me.

During the interview process, it struck me just how many of these women presumed their story was unimportant, and how they found it cathartic to speak out. In the majority of instances, women expressed gratitude that someone actually asked to hear about their experiences, and some stories had been buried so deeply, they had yet to be shared with other family members. While many women are resilient, others remain fragile and needed referred on to support services to manage trauma and stress. Others spoke anonymously.

Significantly, it has been powerful to witness these women – with different experiences and backgrounds, different perspectives on the same period of time – all sharing and taking part in the storytelling process. Friendships have been forged, and barriers broken down. For all these reasons and more, the process has been a healing, restorative one, which will resonate with readers all over Ireland.

One recurring theme is the lack of aftercare or statutory support offered to bereaved families. In 1974, Sharon Austin’s teenage brother, Winston, was abducted and murdered by the IRA.

“My parents got no support when he died. My father became an abusive alcoholic . . . my mother became totally dependent on drugs and tried to commit suicide. She must have tried at least 20 or 30 times.”

Former wives or partners of security forces personnel, and women who served themselves, provide a unique perspective within the collection. “I never felt safe in the RUC, and I felt I had to keep my job a secret a lot of the time,” one RUC reservist tells us.

Lorraine Murray, a survivor of the Greysteel massacre in Co Derry, also breaks her silence. Her powerful account describes how they felt abandoned and forgotten in the wake of the tragedy, an admission that made front-page news upon the book’s release.

“It feels like my mother and I weren’t even there. When they talk about Greysteel, we’re not included . . . they offered us nothing but a counsellor when it happened and then they forgot about us. It feels like I should be talking about it now, however hard it might be.”

Importantly, the collection contains accounts from those affected by state violence; highlighting the continuing failure of the British state in dealing with historical cases. These include daughters of Sammy Devenney, the first person to die in the Troubles after a savage RUC beating. Collette O’Connor (nee Devenney) says the family have never grieved properly.

“It’s still too painful; because nothing has ever been explained. It annoys me that people – politicians – think you can brush things under the carpet. You can’t. Too many people here need answers, and that should be made a priority.”

Despite its serious subject matter, Beyond the Silence is, above all, an uplifting collection in which the true strength, dignity and perseverance of the human spirit shines through.

Meeting these women has given us greater insight into the hurt that remains within today’s post-conflict society. It reinforces the woeful inadequacy of current peace proposals and makes a compelling case for a mixed approach to dealing with the past – which must include informal and people-centred processes and ensure all sections of the community can have their voices heard.

The process of allowing people to tell their story also gives the public the maximum information on what has been denied, covered up or silenced throughout our recent history. For too long now, families and communities who have suffered most from violence are being used as pawns in a blame game. This needs to stop. Beyond the Silence demonstrates the courage and integrity of local women and offers a solution in breaking the current political impasse. Their honesty cuts through the rhetoric.

The book was dispatched to more than 100 Irish and British politicians in the hope that they might take the time to read its contents and reflect on the folly of their ways.

As one woman in the collection so succinctly puts it, “People need to know the real history – from those who lived it, and we shouldn’t be afraid to talk.”

Going beyond the silence is about all of us hearing and acknowledging these details. While it was by no means easy, this approach offers an example to others of what is possible – that in telling stories it is possible to honour people individually, while hearing them all together.

Thanks to everyone who participated in the Unheard Voices Programme, developed by Creggan Enterprises and funded by the International Fund for Ireland. Beyond the Silence is published by Guildhall Press and available for download, from Amazon, priced 99p