Returns are rarely good news in the book trade, but many happy returns to Books Ireland, now an elder statesman of the Irish publishing industry 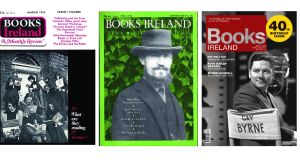 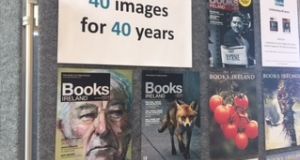 At 40 years old, Books Ireland is Ireland’s longest-running books magazine. Its underlying principles remain the same. There is no room for “puff” pieces or misleadingly negative views. This forthright expression of opinion has not always been popular with some people but that honesty is why the magazine is respected to this day 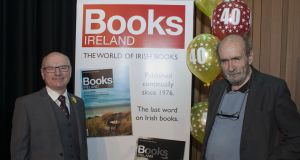 Books Ireland is celebrating its fortieth birthday. Literary magazines and journals have come and gone in Ireland. Although many of them were of the highest standard, most only lasted for a few years. At 40 years old, Books Ireland is Ireland’s longest-running books magazine. Its underlying principles remain the same. There is no room for “puff” pieces or misleadingly negative views. This forthright expression of opinion has not always been popular with some people but that honesty is why the magazine is respected to this day.

When two publishers collapsed under me, Browne & Nolan and then Irish University Press, my obvious next career step in the 1970s was to go to London. However, my five children and their mother (a teacher) were all in Irish schools and not keen on moving. The idea that I might make some sort of living by publishing an Irish book-review magazine came in 1975 when CLÉ, the Irish book publishers’ association, was forced to stop producing its catalogue, Books from Ireland.

I buttonholed novelist Bernard Share, then acting as CLÉ’s paid secretary and soon to lose that position. “If I published a commercial book magazine, would you be editor?” I asked, and to his eternal credit Bernard said yes.

Most well-known Irish writers were published by English companies, so we sought advertising there, landing orders for the planned first issue in April 1976 from Secker & Warburg, the Bodley Head, Thames & Hudson and even Burke’s Peerage. We decided to make that the second issue and start a month earlier with an “export” number so that the magazine wouldn’t be seen as too Anglocentric.

We assembled a mailing list of libraries, booksellers and other likely subscribers, and posted out magazines, waiting for orders to come pouring in. However, the annual subscriptions at £4.50 (33 pence per copy, also the price of a pint of stout in those days) came in a trickle, and I was disabused of the idea that it could provide “some sort of living”.

Bernard was also editing Cara, the Aer Lingus inflight magazine, and took the pocket-money we afforded him as not too insulting. We insisted on paying contributors at least token fees, and at the end of the year we approached the Arts Council for help, and they voted us £100 – the first of what were to become regular grants.

Books Ireland established itself on the Irish publishing scene and gave not only much-needed publicity to smaller Irish publishers who found it hard to get space in the mainstream media, but also attracted well-known Irish writers, such as Maeve Binchey and Neil Jordan, and more recently the likes of John Banville, Joseph O’Connor and Eithne Shortall. It was not all plain sailing and the magazine did not always please the powers that be, like the time that a reviewer said that Michael D Higgins could be “accused of crimes against literature”.

In 1988, when another employer, Kilkenny Design Workshops, collapsed, my hope of living off Books Ireland was realised. It had become an all-absorbing spare-time occupation, but the production costs made no sense. The text was cast from molten metal by Linotype machines and the pictures were etched in copper blocks with acid and (believe me!) dragon’s blood in a long and expensive process. The letterpress printing machines had more in common with Gutenberg than with the digital techniques of today.

But the computer and “desk-top publishing” had arrived. I could do the typesetting and layout myself which saved a fortune. The magazine’s finances were revolutionised overnight, and as I was coming towards pensionable age, I could take on the editing.

Magazines and newspapers can publish reviews of only a fraction of books submitted. Since the first issue, we included a list of “books received”. My first act as editor was to turn this into the First Flush column, where every book was accorded a description in 100 or 200 words – ie a mini-review. Unexpectedly, First Flush proved to be the mainstay of the magazine and the reason many subscribe to it.

The idea of using book covers as the front page was an inspired choice and over the decades this has produced some exceptional covers. Some work better than others but we’ve never been afraid to use offbeat and unusual images.

In 2013, the recession resulted in the collapse of advertising revenue and then the Arts Council withdrew its grant. Now an octogenarian, I seemed to have come full circle as my employer – myself this time – couldn’t carry on.

Fortunately, Nick Maxwell and Una McConville of Wordwell Ltd came to the rescue and invested in Books Ireland. They took the opportunity to revitalise the magazine with a new layout and approach. Tony Canavan, a long-time associate of Books Ireland, was appointed editor, bringing enthusiasm and a fresh eye to the job. So here’s to the next 40 years!