Billy Collins: ‘When I start a poem, I assume the indifference of readers’

The former US poet laureate believes in bringing poetry to the widest possible audience. Some critics have found his poetry to be lacking in complexity, but he’ll take that over wilful obscurity any day 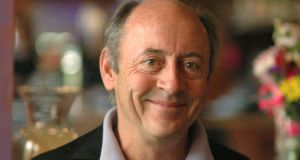 Billy Collins: ‘It is like an eye chart, with its big E at the top, and the letters getting less legible as it moves along. A poem should be like that’

‘The idea of a popular poet is a bit of an oxymoron in people’s minds,” says Billy Collins, the luminary lyricist and former American poet laureate, who will give a public reading at this year’s Kilkenny Arts Festival.

“If the general population has to go out of their way to find poetry, if they have to go to the library or bookstore, I’m not sure they will. We shouldn’t have to seek out poetry; it should seek us out. It needs to be part of everyday life.”

Collins’s manifesto seems idealistic, but the impact he has had since he first gained public prominence in the 1980s has changed the cultural landscape in the US dramatically. During his two terms as national poet (2001-2003), he pioneered a variety of innovative initiatives that saw poetry appear in unexpected places: the back of cereal boxes, subway stations, and, most importantly for him, the classroom, where contemporary poetry had all but disappeared from the curriculum.

“The job of the poet laureate is to bang the drum for poetry,” he says. “And when I was first offered the position, I was uncomfortable. I can’t bang the drum for all poetry, I thought, because some of it is terrible. So I decided to gather together poems that I could bang the drum for: witty, imaginative contemporary poems. They were put together first on a website and then we published an anthology, Poetry 180, which is still used a lot in schools.

“I have got a stack of feedback over the years from teachers about how the anthology works in the classroom; how they will read a poem with the class, say every day or week, and how students will often hear things that grab their interest and have to admit to themselves that it’s a poem.”

His impact on education was a particularly heartening victory for Collins, because he believes that it is at school that we first begin to distance ourselves from our natural poetic inclinations. “Children are natural poets,” he says. “When you think about it, they are fascinated by rhyme and language for the sake of language, the pleasure of it for the ear. But I think there is a fear of poetry instilled in us at school, often because very difficult texts are chosen.

“Of course, if you teach The Waste Land [by TS Eliot], the teacher is necessary, but poetry shouldn’t require mediation, and I think that’s why people come out of school thinking poetry is a puzzle, or not for them, when poetry really has the potential to have such a wide-reaching effect upon our lives.”

Needless to say, Collins’s own work – which has been published in 14 collections spanning nearly 40 years – is the type of poetry that is immediately engaging to the reader. In fact, his first poems were published in Rolling Stone magazine, “when poetry still had the ability to insinuate itself into those kind of situations, and could reach hundreds and thousands of readers”. Since the 1990s, his collections have regularly appeared on American bestseller lists, and his readership is such that he even secured a six-figure advance from his publishers at the beginning of his laureateship that was rumoured to be close to $1 million.

The immediate attraction of poems such as I Chop Some Parsley While Listening to Art Blakely’s Version of ‘Three Blind Mice’ or Fishing on the Susquehanna in July is that they give the reader concrete starting points from which to enter on a journey with Collins, whether it be a journey of inconsequential domesticity or greater magnitude.

Although much of Collins’s work is inspired by everyday life, he has also been commissioned to write commemorative poetry about momentous events: 9/11, for example, or the 100-year anniversary of Grand Central station. No matter the subject, Collins believes a poem should invite, not alienate, the reader.

“When I start a poem, I assume the indifference of readers,” he says. “That there might even be a touch of hostility. There is a line from a Patrick Kavanagh poem that really resonates. It goes: ‘Tomorrow’s Wednesday. Who cares?’ Well, the reader can’t be expected to be interested in your life, the life of a stranger. The job of the poet is to seduce the reader, to make sure they are interested, to make something happen for them that is unexpected.”

It is about achieving a balance between “clarity and mystery”, he says. “It’s important to know which card to turn over and which to lay face-down. But the beginning of a poem should always be very clear, to get a reader on board, and only then can you be confident that when you move into less obvious areas of metaphor or fantasy that they will go with you. It is like an eye chart, with its big E at the top, and the letters getting less legible as it moves along. A poem should be like that.”

Collins’s seduction techniques have won him detractors as well as admirers, particularly in poetry and academic circles.

“I have spoken a lot about wilful obscurity in poetry – where the poet is hiding behind language, using it as camouflage – and I don’t have much tolerance for that kind of poetry,” he says. Nor does he have time for the critic who imposes complexity on a poem, “obscuring it for the reader”. As he writes in his wry 2003 poem On Poetry “all they want to do is tie/ the poem to a chair with rope/ and torture a confession out of it./ They begin beating it with a hose/ to find out what it really means.”

Indeed, certain critics have found him lacking in complexity. “I have been accused of being underconceptualised, ie, some critics seem to think my poems are not difficult enough, as if to be popular is to be a failure somehow, as if accessibility is a dirty word. But it is the job of the critic, not the poet, to be difficult and they can provide the problems if they find insufficiency in the poems. I don’t mind,” he says. “I am more concerned with my readers.”

Despite the fact that his readership is in the millions, it is a singular reader that Collins still imagines when he sits down to write a poem. “You know, you will find that there are very few people in my poems, because I just want to be alone with the reader. And it is one reader. It is a private and intimate exchange.”

Even in a packed auditorium, he says, it is “that one potential intimate receiver I am thinking of, but instead of whispering to them I am speaking through a loudspeaker system. [The critic] Terry Eagleton, says that writing is language that can function perfectly well in the physical absence of author. And sometimes, before I step on stage, I do question whether I need to show up and demonstrate dependency of language on ourselves.”

But that is the contradictory nature of poetry. It is a projection of the most private aspects of the self, which has the capacity to move even – or especially – a stranger.

Billy Collins will give a public reading as part of the Kilkenny Arts Festival on Saturday. kilkennyarts.ie

Collins is well known for the comic slant of his poems. He says Warner Brothers cartoons were as formative an influence on his work as Wallace Stevens. Over the years, he has applied his mischievous viewpoint to poetry as a subject matter in itself, composing several parodies of famous poets and their work, such as Lines Composed Over Three Thousand Miles above Tintern Abbey, in reference to a poem by William Wordsworth.

His 2006 poem Irish Poetry, in which he gently ribs the typical rural idylls of Irish lyrical poetry, with its “phosphorescent heifers” and “penitential houses”, has proved more than a little controversial. “The only reason it worked,” says Collins, “is because Irish poetry is so familiar. You would never be able to write something like that about American poetry.”