Bernard O’Donoghue: from byres to spires 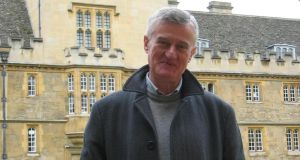 Award-winning poet Bernard O’Donoghue, who was shortlisted for the 2016 TS Eliot Prize for The Seasons of Cullen Church, and in 2011 for Farmers Cross, has a dedicated following of poetry fans from Munster to Oxford and beyond, who admire the restrained and simple eloquence of his thought-provoking verse.

Born near Cullen in Co Cork, O’Donoghue moved to Manchester at 16, following the sudden death of his father. He lives in Oxford, where he taught medieval and Irish literature until his retirement (he was commonly referred to as “the nicest man in Oxford”), and returns regularly to Ireland where he and his wife Heather maintain close ties with his birthplace. The dual influences of growing up in rural Cullen and his scholarly reading can be seen in his often intertextual poetry.

From farmers to football matches, no minor person or event is unworthy of consideration. Poems from across his writing career are often dedicated to living or dead friends (recent dedicatees include Brian Friel and Seamus Heaney) or recall named figures from childhood. Loss is a prominent feature, with his father’s premature demise (he died suddenly at a Gaelic football match) threaded through the volumes. The Day I Outlived My Father (Outliving, 2003) begins “Yet no one sent me flowers, or even/ asked me out for a drink”, while Lastworda Betst (The Absent Signifier, 1990) concludes: “I’ve never heard/ My Christian name without a start again/ Since he stopped and shouted it, his last word.” In The Seasons of Cullen Church, his father makes what seems like a final appearance in “a dream/ of dreaming” (Meeting in the Small Hours) his departure marked by a “dying-fall” farewell: “‘Time to go back,’ he said./ And I don’t know if I will get away again.’” O’Donoghue’s mastery of last-line “dying falls” can take us by surprise, whether providing a witty turn or an abrupt reality check.

Rural locations are not presented as picture-postcard perfect. Leaning towards the anti-pastoral, hardship, tragedy and emotional paralysis can muddy the landscape, but there are also quietly humorous takes on the practices of rural life. O’Donoghue’s use of the sonnet form for a graphic description of the role of inseminators who “always sped away too fast […]to get well clear of the scene of the crime, with the long/ rubber gloves” is as wry as the parting description “the soft term ‘dairying”’ (The Inseminators, 2016).

The popular and moving Ter Conatus (Here Nor There, 1999), harking back to the rural Ireland of the 1950s, has a universal resonance. In anecdotal colloquial mode, “Sister and brother, nearly sixty years/ They’d farmed together, never touching once”, the poem captures the grief and regret of the brother as he reflects on his failure to offer tactile comfort when pain “got so bad she gasped”. An exemplary hybrid of the narrative and elegiac voice, it draws on Virgil’s Aeneid, Book 6, where Aeneas tries and fails, three times, to embrace the ghost of his dead father.

Taking a step towards her. ‘I can manage’,
She answered, feeling for the stairs.
Three times, like that, he tried to reach her.
But, being so little practised in such gestures,
Three times the hand fell back, and took its place,
Unmoving at his side.

This quiet elegy for repressed lives skilfully rolls up the mourning of a death and a lifetime of emotional paralysis in an anti-pastoral setting of personified untended “bales, standing silent in the fields” leaving us, like the brother, to ponder what if?:

Almost breaking with a lifetime of
Taking real things for shadows,
He might have embraced her with a brother’s arms.

From corporal to state-sanctioned violence (the Iraq war recurs in Farmers Cross), O’Donoghue’s frequently ethically-focused poetry also responds to perceived injustice. Memories are not sugar coated. Alliteration, stressed short words and simple diction effectively transmit the indignation of schooldays tainted by the sights and sounds of punishment administered on “Barty – a hopeless speller with such force/ and rage that the boy’s bare feet danced a tattoo” (Spoil the Child, 2016). Likewise, in Robbing the Orchard (2016), when revisiting an overgrown garden and adjacent school ruins: “you can still think you hear/ the cries of pain inflicted” by “the old-style sadist teacher”.

Some of O’Donoghue’s poems are melancholically self-reflective. The early, almost self-elegising Nel Mezzo del Cammin (the title, “midway on our path in life”, from Dante’s Inferno) concerns life, death, writing and posterity, anticipates and typically underplays the potential for leaving an undefined poetic mark: “the odd poem (two in a good year)/ Won’t do to make the kind of edifice/ I’d hoped to leave”. More than 30 years and 300 published poems later, the poet reflects on that “edifice”.

In The Seasons of Cullen Church, at times, O’Donoghue becomes his own predecessor. Unpacking the library of his writing career, he reappraises his penchant for looking back towards rural Ireland to deal with contemporary issues. As if the Hare begins “But if I always seem to be returning/ to those few fields […]as if there’d been nothing in the interim”. In Stigma, he interrogates his method of mediating present-day ethical issues by writing anecdotes of the past. Beginning with a rural narrative of farm worker “Con and his feckless family”, it metapoetically turns back on itself to ask:

[…]But why
do I keep on returning to that time –
to Con’s shaky bike and his one pair
of sandals
[…]
Why not stay
with the poverties of our present time:
beggars on bridges for us to trip on,
or asylum seekers loping through
the infra-red at detention centres
on the coast of France, or drowning
in the hundreds in the Med?

The effect is quietly challenging. By drawing us into little detail of everyday stories of ordinary people and places in an engaging conversational tone, he primes our sensibilities. Particulars of the bigger ethical issues may be scant, but their mere mention, often sudden, can stir us into thinking about and questioning our own response to the ‘poverties of our present time’. In Stigma, new humanitarian poverties of asylum seekers and drowning refugees are added to the problem of homelessness and to stigmas addressed in other poems. Thoughtful and thought-provoking, O’Donoghue and his poetry leave a distinguishing mark.

All quoted poems can be found in Selected Poems (Faber, 2008) and The Seasons of Cullen Church (Faber, 2016). Bernard O’Donoghue, Emeritus Fellow of Wadham College, Oxford, is currently working on a translation of Piers Plowman for Faber