Barkskins by Annie Proulx: a trite caper of eco-calamity

At more than 700 pages, Proulx’s polemical lament uses up a lot of wood pulp 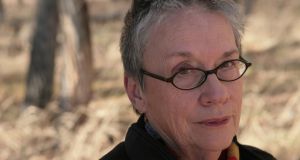 Mankind’s final big story, now being written and apparently nearing completion, is the destruction of the planet. It has been an ongoing project that began several centuries ago. We humans are indeed a nasty, messy species.

In her dense new novel, revered American writer Annie Proulx sets out to chronicle a major chapter of environmental carnage, the brutal rape of the great forests of North America. It is a fascinating subject, incorporating as it does the history of a new world that drew eager, often desperate Europeans into an odyssey of discovery, hope and the inevitable conquest.

Unfortunately, for all its length, Barkskins is a thin and surprisingly trite caper that lurches clumsily through the generations burdened by endless research and a stagy, random, quasi-Dickensian narrative. Despite her proven gifts, Proulx is no Dickens, least of all in Barkskins. This is her longest and weakest work, one in which her often risky off-handedness falters, badly.

Throughout it, she proves insufficiently interested in her characters to render them remotely believable. Time and again, the narrative grinds to a halt before shuddering back into action for another spurt of set-piece frenzy. Truth is, this is not a novel but rather 10 novellas, loosely glued together by facts, lore and nuggets of information.

It all begins with two Frenchmen down on their luck. One is from the country, the other from Paris, and there they are in New France – French colonial territory, nowadays known as Canada. They are labourers, more like slaves, and their futures depend on serving their time in the clearance and eventual settlement of a vast and magnificent area of natural wilderness.

From the outset, the book heaves and sighs with the felling of great trees. One of the many difficulties encountered when reading this hasty mess is Proulx’s glib tone, the harshness of the knowing narrative voice. It is as if the actual story, for all its weight of fact, never quite engages her. Instead, she wheels in a staggering number of caricatures, mostly grotesque, some with silly names (Dud McBogle, Brenton Dred-Peacock, Hudson Van Dipp, Blade Scugog, Louis Bluzzard and even Jim Sillyboy). Many of them perform not very funny comic turns before being abruptly killed off.

Barkskins is polemical but never profound, and it fails to achieve the cohesion of Thomas Pynchon’s equally ambitious and far more compelling Mason & Dixon (1997). Pynchon made inspired use of his source material, as did Amitav Ghosh with her lively Ibis trilogy, based on the opium trade by the East India Company. Not so with the anything but cohesive Barkskins.

Our two foundation goons are introduced: Rene Sel and Charles Duquet. It is tempting to interpret their names as hints towards what is to come. “Sel” is as in the French for “salt”, and an easy deduction follows: the illiterate Rene must represent the salt of the earth. So far, too easy. “Duquet”, of the “whinging treble voice”, makes one think of “disquiet”. Duquet seems destined to personify discord, restlessness and entrepreneurial greed. The trees are the victims and, as far as the conquering newcomers are concerned, the native Indians are reduced to les sauvages.

Early in the story, Duquet goes missing, but not for nearly long enough. Sel is given in marriage to an old (though really not so old) but wise Mi’kmaw Indian woman. They duly increase and multiply, creating more characters. Generational sagas may seem to provide easy pickings for a storyteller: just keep those conveyer-belt-fashioned characters coming fast and furious through birth, death, more births, fatal accidents and/or old age and death. Convenient, perhaps, yet requiring slightly more work than it may appear.

Proulx is in such a hurry to race through her research that the characters barely have time to drawn breath, reveal their various flaws, make enemies and then die,, culled by an author with three centuries of human error to get through and little patience for sentimental gestures en route to the finishing line, a present in which a scientist foresees “a great crisis is just ahead”. Sapatisia Sel, decent-minded descendant of Rene, counters this: “The forests, the trees, they can change everything.”

Considering Proulx’s obvious delight in facts and anecdote, it is surprising that there isn’t more about trees and their mythology, their role as witnesses. If there is a theme aside from ecological polemic, it is mortality. There is another way of looking at it: that the many deaths may be the symbolic revenge of butchered trees on the humans who cut them down for profit.

Throughout her career, Proulx has always shown a grasp for process and methodology, the skills required and perfected by fishermen and ranchers, woodsmen and hunters. Her work has been about survival in the great American landscape, of what it is like to skin an animal or work in a sweltering cannery. Her blunt and specific feel for the particular makes her short stories shimmer and burn their way into the memory.

Heartsongs, Proulx’s first collection, was initially published in the US in 1988 under the name of E Annie Proulx. A UK edition eventually appeared in a slightly different form in 1995 after the success of The Shipping News (1993), which went on to win the Pulitzer Prize.

Before that had come her first novel, Postcards (1992), to date her finest sustained narrative. Postcards is about the life of Loyal Blood, a man on the run from a crime and also from himself. His odyssey takes him across the United States and through many lives. It is one of the great American novels, raw and heartbreaking.

Postcards contained the seeds that would manifest themselves so brilliantly in Proulx’s masterwork, Brokeback Mountain, a love story that also confronted homophobia head on. Initially published in the New Yorker in October 1997, it later dominated her second story collection, Close Range: Wyoming Stories (1999).

That a polemic lamenting the destruction of forests should itself have required so much wood pulp may well prompt a few lame jokes. At more than 700 pages, Barkskins feels even longer due to the repetition, so many voyages, so many family disputes, tiny mishaps that result in sudden death, and stories within stories, including the eventual fate of a very unlucky wig. To learn that Proulx had to axe 150 pages from the original manuscript is a small mercy.

“It is one thing to have extraordinary raw material in your literary scrap bag, but quite another to stitch the pieces into a driving and classic story that forever fixes a place and an event into the reader’s imagination,” Proulx wrote in an afterword to Thomas Savage’s visceral tale, The Power of the Dog (1967).

She might consider her words in the context of Barkskins. Savage’s vision is one she has always aspired to and has at times matched. Pathos and humanity define stories mired in man’s wrongdoings.

In all fairness to the author’s industry, it is bewildering that when tackling a theme as dark as she has here, Annie Proulx, a majestic short story writer who actually possesses the authority and the menace to carry it off, never mind a magpie’s love of fact and detail, opted towards lame screwball comedy rather than serious tragedy.