Angie Thomas: ‘I never thought I’d be talking about a Black Lives Matter book in Ireland’

‘I never met an author who looked like me,’ says author of YA bestseller The Hate U Give. ‘It seemed easier to be a rapper. Hip-hop was my mirror’ 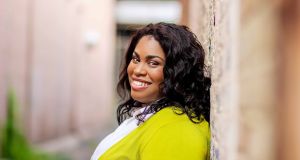 Angie Thomas on The Hate U Give: “If it becomes a classic, great, but let it be an outdated classic”. Photograph: Anissa

Angie Thomas’s debut YA novel, The Hate U Give, is the YA book of the moment. Top of the New York Times bestseller list since its release two months ago, the novel tells the story of Starr Carter, a black American teenager who witnesses the shooting of her unarmed best friend Khalil by a white police officer. As well as police brutality, Thomas examines family values and community in modern America, code-switching and identity among black teens, and the legacy of black activism that Starr inherits from her father, Maverick.

Fittingly for such a timely novel, Twitter – the social network that bills itself as “what’s happening” – plays a role in the text, as the teen characters’ primary news source. Starr notes that people like Khalil become hashtags on Twitter, but rarely get justice. Twitter also features in Thomas’s own story.

In conversation recently with Irish YA author Deirdre Sullivan in Eason’s on Dublin’s O’Connell Street, Thomas talked about how her novel found its publisher. In a Twitter Q&A, she asked literary agent Brooks Sherman if the Black Lives Matter movement would be an appropriate topic for a young adult novel. The response wasn’t just affirmative but enthusiastic, and she signed with Sherman a few months later. After revisions (Thomas is refreshingly keen to discuss her editing and revising process, which she says is as critical as writing), the novel went on submission and multiple publishers expressed interest before the novel sold.

When Thomas herself was a teen, she was a rapper – Sullivan asked whether she had aspirations of being a writer, or if it felt remote and impossible. “I never met an author who looked like me,” Thomas said. Mississippi has a rich literary tradition – Thomas mentioned Eudora Welty and William Faulkner – but “they were white and dead, two things I wasn’t, and didn’t want to be. It actually seemed easier to be a rapper. Hip-hop was my mirror.”

Hip-hop, she said, “gives so many young people their voice. It gets criticised, as it should, because it has problems, but it’s where a lot of young people see their stories,” more so than in books. Thomas quoted Chuck D from Public Enemy, who has said that hip-hop is urban America’s CNN.

The idea of what constitutes culture – and news – is a big question for Starr, the novel’s protagonist, who is caught between the world of her rarefied suburban school and the hood where her father runs a convenience store with Huey Newton’s photograph on the wall.

Thomas herself attended college while living in her own less-advantaged neighbourhood. Following the murder of Oscar Grant, Thomas was angered by the responses of her peers, who seemed keen to blame the victim, and she says “instead of setting fire to trash cans and having my own little riot, I decided to write.”

When Sullivan described Starr’s story as that of “a Ravenclaw discovering that she’s a Gryffindor,” Thomas laughed and asked who would write that fanfic. Throughout the conversation, Thomas laughed often, and seemed almost as excited to meet her audience as her audience was to meet her. “I never thought,” she said, “that I’d be in this room, talking about a Black Lives Matter book in Ireland. That is amazing to me.”

Asked what books resonated with her as a young reader, Thomas said Roll of Thunder, Hear My Cry was important, as it was the first book she read that depicted a black girl from Mississippi. She struggled to think of other representations of black girls in fiction, in spite of being a big reader as a child, and this was an absence that she hoped her own fiction could help to address. On her writing future, Thomas spoke of the difficulty in becoming a brand, and living up to the expectations of her audience. “I don’t want to write another Black Lives Matter book. I want to write about black lives that matter.”

Before a long and friendly signing session, Thomas was asked if her novel might replace To Kill a Mockingbird as the seminal YA text about racism in America, and about John Green’s description of her book as “a classic of our times”. She would not be drawn on Harper Lee, but had something to say about the legacy she hoped for – she wants the assertion that black lives matter to seem antiquated and strange. “If it becomes a classic, great,” she says, with a smile, “but let it be an outdated classic.”

The Hate U Give is published by Walker Books, £7.99