All Things Made New: Writings on the Reformation by Diarmaid MacCulloch

The historian’s new collection is a masterly take on the Reformation, full of insights into Martin Luther and the medieval church 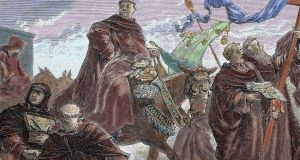 Book Title:
All Things Made New Writings on the Reformation

Next year is the 500th anniversary of what is generally regarded as the founding event of the Reformation: Martin Luther’s posting of his 95 theses on the power and efficacy of indulgences on a church door in the German town of Wittenberg. Written in Latin, the language of scholarship of the day, the theses were designed to generate debate in the university and church. Luther protested what he regarded as the outrageous behaviour of Johann Tetzel, a friar who was selling indulgences to raise money to support the reconstruction of St Peter’s Basilica, in Rome. For Luther this manipulation of the faithful in pursuit of material gain for the church represented a low point in an institution that had lost its way, one that had misinterpreted its theological foundations and was in serious need of reform. Were it not for the unprecedented dissemination of the 95 theses through pamphlets, broadsheets and woodcuts, Luther’s protest might have remained the muted voice of a reforming theologian in a church that still retained its social, political and religious influence.

That was not to be, however, and Luther’s reforming zeal caught hold not only in Germany but also across parts of continental Europe, England and Scotland.

The legacy of this turbulent century continues to shape political and religious life. Diarmaid MacCulloch is one of the world’s leading scholars of the period, and with All Things Made New: Writings on the Reformation he returns to terrain that he has made his own over many decades.

This book is a collection of essays, all previously published, that cover a set of themes related to the Reformation across Europe and to the English Reformation. Among them are the theology of Calvin, the Council of Trent and the Counter-Reformation.

In the background is MacCulloch’s classic Reformation: Europe’s House Divided 1490-1700, from 2003, on which many of these essays build. A lot were written primarily for general readers, designed not only to interpret extensive scholarship for a lay audience but also to advance MacCulloch’s reading of the Reformation and its origins, causes and aftermath. But many if not all of the essays do require a good understanding of the theology and history of the 16th century to be enjoyed.

A section on the English Reformation covers the creation of the Book of Common Prayer, the King James Bible and the figures of Henry VIII, Thomas Cranmer and the Tudor queens. It is followed by a section that looks back on the English Reformation. Focusing more directly on interpretations and reception, it includes fascinating essays about Cranmer’s biographers and Richard Hooker’s reputation.

The book reinforces and develops many of the ideas with which MacCulloch has been associated, and which have had such an impact on how the Reformation is understood. Many of the essays reaffirm his view that the Reformation was first and foremost a theological event that sprang from a big idea about death, salvation and the afterlife. MacCulloch challenges the widely held view that the medieval church was a spent force, creaking under the weight of its bureaucracy and corruption, and that Luther’s protest at that corruption was simply the catalyst for the collapse of a church already in decay.

MacCulloch shows that this account of the medieval church as a spent force is limited and somewhat inaccurate. True, it was chaotic and cumbersome, but there were also strong forces of vitality and revival. So although MacCulloch accepts that the social and political elements of Luther’s protest were important, he insists that it was ultimately the adoption of the theological claims of Luther and his followers that shattered the power of the medieval church. The “big idea” was justification by faith alone (sola fide), which Luther drew and developed from the writings of Augustine and Paul. The Reformation’s progress therefore was one that was driven primarily by the power of ideas, not simply by the rhetoric of denunciation.

MacCulloch’s interpretation of the causes, nature and progress of the Reformation, both across Europe and in England and Scotland, has caused a generation of theologians and historians to rethink aspects of the received wisdom.

In All Things Made New MacCulloch addresses new dimensions of Reformation history but always with his characteristic erudition and engaging style. The essays cover topics old and new, and collectively display the depth and breadth of MacCulloch’s scholarship. For this reader those on the intricate (athough fascinating) politics of the English Reformation are less accessible than those in the rest of the book, but they will be more accessible to others.

MacCulloch’s insightful analysis and authoritative voice pervade this collection, and readers with an interest in the Reformation will learn much from this thoroughly absorbing and compelling work.

Linda Hogan is professor of ecumenics at Trinity College Dublin