A Woman of No Importance: The Untold Story of WWII’s Most Dangerous Spy, Virginia Hall 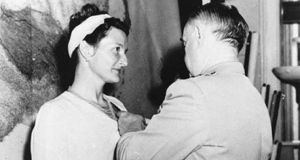 Book Title:
A Woman of No Importance: The Untold Story of WWII’s Most Dangerous Spy, Virginia Hall

One evening in 1942, two agents working for Britain’s Special Operations Executive, or SOE, were hiding in a Marseilles safehouse. One was 32-year-old Peter Churchill, a relative newcomer to the field. The other was Virginia Hall, a thirty five year old American woman who had been in France since the previous summer.

As they waited for the coast to clear, Hall offered the new arrival some advice. “When you get home, it’ll look different from a distance,” she teasingly told Churchill. “You’ll forget how cold you were – except to bring warmer clothes next time; you’ll forget all the frights you had, and you’ll only remember the excitement.”

Over seventy years later, the exploits of the SOE and their Resistance comrades retain their romantic power over the imagination. The SOE was founded in July 1940 with the purpose of setting occupied “Europe ablaze” with acts of sabotage and espionage. Its modus operandi was, as Sonia Purnell reminds us, inspired by the Irish forces during the War of Independence, which showed that “regular troops could be defeated by a hostile population whose will had been stiffened by a few resolute gunmen”. And one of its first, and best, agents was Virginia Hall.

Having worked for the US State Department in Italy and Turkey, where she lost a leg in a shooting accident, Hall signed up as ambulance driver for the French Army in early 1940. Forced to flee to London, Hall joined the newly formed SOE and in 1941 was sent on her first mission.

Once in France’s Free Zone she proved herself to be a brilliantly skilled operative, recruiting and coordinating multiple agents and while keeping her true identity a secret from the Gestapo. The mysterious “limping lady” – she called her artificial leg Cuthbert – became the Nazis’ most wanted target.

After her network was betrayed by a particularly loathsome traitor, a priest who gave anti-Nazi sermons in order to ingratiate himself with the Resistance before selling their details to the Germans for large payments, Hall eventually had to flee across the Pyrenees – an agonising experience for a woman with a prosthetic leg.

Undaunted, she insisted on returning to the field. Eventually she was given the opportunity to properly organise a serious fighting force. Her intelligence work played an important role in enabling the Allies to advance after D-Day.

It’s a cliché to describe a true-life spy story as being as gripping as any thriller, but it really is the case here. Purnell has done a huge amount of research for this superb biography, interviewing Hall’s beloved niece and uncovering previously lost documentation of Hall’s military honours from the French state.

But the narrative wears this research lightly, as Purnell nimbly takes the reader through Hall’s complicated manoeuvres all over central France and beyond. And in doing so, she paints a rounded portrait of a complicated, resourceful, determined and above all brave woman.

Purnell also gives readers vivid pictures of Hall’s fascinating associates, such as Denis Rake, a jovial gay cabaret artist who hated loud noises but who proved himself to be one of SOE’s most courageous operatives. Another memorable figure is the glamorous and rackety Germaine Guérin, lynchpin of the Lyon resistance and proprietor of one of the town’s most elegant brothels.

Her clients included many German officers, providing Germaine and her girls with opportunities for both spying and sabotage. SOE agent William Simpson later wrote that although Guérin “moved in sordid surroundings and her morals were irregular . . . she had the shining cleanliness of a sealion.”

While Purnell pays rightful homage to the deeply moving bravery of Hall and her comrades, she is at pains not to romanticise their often murky, gruelling world. The various local resistance groups were riven with infighting and mistrust and SOE command was guilty of naivety and sometimes carelessness.

After the war Hall joined the newly established CIA; today the agency recognises her as a war heroine and a portrait of her hangs in CIA HQ, but her time there saw her constantly thwarted by sexist superiors. Purnell’s brilliant book shows that the war gave Hall, and others, a rare opportunity to prove their true worth. “Although capture was a real prospect every minute of the day,” Purnell writes of Hall’s time in France, “she had never felt so free.”