A study that fails to do justice to a great writer: Updike 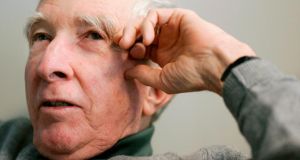 Even at its finest, biography is a difficult enterprise; claims of being revelatory and insightful may often turn out to be another way of settling a score or merely proving the stamina and tenacity of the biographer.

Adam Begley certainly brings commendable levels of meticulousness to his competent examination of the life of one of the acknowledged masters of contemporary fiction.

Opinions vary about the earthily ethereal John Updike, creator of Rabbit and author of Roger’s Version (1986) and so much more yet, sentence for sentence, at his best, few writers, living or dead, use language with such grace or perception. The sheer opulent grandeur, which he could summon with ease, proved the scourge of his detractors.

In Death of Distant Friends the narrator remarks of an old lady who has died: “She had always seemed ancient, she was one of those New Englanders, one of the last, who spoke of Henry James as if he had just left the room.” Even Nabokov would envy that.

Reading any biography does involve dealing with far more than information about the subject; there is also having to establish a temporary pact with the biographer. This book is interesting mainly as a study in ambivalence. Had it not been about Updike, I would have abandoned ship by midway. Begley spent five years working on it and set out to read Updike’s work, of which there is a Herculean amount: the short stories, the novels, poetry and an oceanic array of literary and exhibition reviews, essays, humorous pieces and general journalism.

The early sections of the biography are dominated by the young Updike’s aspirations and his intense relationship with his mother, Linda, a determined woman, heroically committed to pursuing literary ambitions of her own. She is immortalised in one of his most beautiful stories, A Sandstone Farmhouse (from The Afterlife, 1994).

Readers of Updike will be familiar with much of Begley’s material, and very little of the flat-footed connections and cross-references which he makes with a righteousness which quickly overpowers his book, will surprise them. Instead as the narrative proceeds, a devoted Updike reader will become aware of a mounting irritation caused by Begley’s moralising tone and his laboured speculations about Updike’s inner motives.

For all its deference, this is a sharp, intrusive and cold examination. It should be conceded that the early chapters are an attempt at charting the making of a writer, and, in the case of Updike, that should be writer as artist. The reason for this distinction rests in his initially planning on becoming the next Walt Disney. After graduating from Harvard, he spent a year in Oxford at the Ruskin School of Drawing and Fine Art. By then he was already a husband and father and still not quite 23.

Certainly, Updike was precocious but for any biographer he presents a challenge: he did not serve in the armed forces, was neither aggressive nor tormented, never hit his wife, did not throw tantrums or wander about drunk and naked, made no suicide attempts and, above all, avoided scandal.

He was very clever and knowing, possessed of a sly smile, a nasal whinny when amused, a breath taking work ethic and sufficient irony to keep everyone guessing as to exactly what was going through his hyper-active mind.

Most pressingly, and this is crucial, as a way of both defending and denouncing the folly of Begley’s overly-long study; Updike made it impossible for any biographer to expose him, as he already had done so, most emphatically in Self-Consciousness (1989) and in the Maple stories.

He habitually confessed his flaws and weakness; immortalising it all, including his family life, in his fiction. He had a speech impediment, was asthmatic and plagued by psoriasis but had no difficulty sourcing sex among the neighbourhood wives. Begley makes much of the suburban sexual activity in which both John and his wife Mary participated during the 1960s.

When their marriage ended, Updike married his mistress. Women liked Updike; he was funny and charming, even goofily attractive as a young man. Begley fails to consider this and dismisses Updike’s beguiling humility as a mask.

To have read so much of the work and to apparently miss its creator – the mercurial individual who was curious about everything, who had passion, humanity and a genius most accurately described as sensuous – is oddly amiss in a biographer. Begley never really looks at Updike’s work practices and how he managed without an agent.

Updike the man is rarely visible in this book because Begley is too committed to playing match the fiction with the real life event. Begley interviewed Updike, as did I, and Updike was very funny, courtly, politely outrageous and astute. But Begley is mainly concerned with Updike the home industry pumping out words. He also takes sides; Updike’s first wife Mary did speak with Begley while Martha, her successor, refused to cooperate and emerges as the territorial presence she was known to be.

Begley makes it clear that she had set out to claim the by then famous and successful writer. Updike never had to struggle as a writer. The New Yorker quickly embraced his talent but he soon moved away to become a novelist. By 1968, with the publication of Couples, he was a millionaire.

Biographies are dangerous, like sharks awaiting a feast of all-too human flesh and foibles. As Updike wrote, in his powerfully compassionate review of Blake Bailey’s harrowing 800-page biography of writer John Cheever: “None of us is completely decent.” It was his last piece and was published in March 2009, weeks after his death. It is true, any life, excepting that of a saint, does look embarrassing and ridiculous when placed under a microscope.

Begley’s avowed aim is to urge readers to discover, return to, wonder and delight in the work of Updike who died on January 27th, Mozart’s birthday, a coincidence Updike would have loved although Begley (whose father, novelist Louis, attended Harvard at the same time as Updike) does not mention it.

Late in the biography he mentions that Updike began reviewing art exhibitions for the New Republic. It is widely know how much Updike loved art, particularly Vermeer. Begley, never one to pass up on a jab, then pronounces that Updike did not know much about art.

Having trudged my way through this clinical, self-regarding book, seething, I feel it is worth mentioning that John Updike’s mother and his son David also had work published in the New Yorker. Begley mentions many people, many writers, many instances, moments from various lives but for all the colourful material and the daunting spread of Updike’s range, John Updike remains elusive and simply beyond Begley’s policeman’s plod towards answers he is incapable of grasping.

Novelist and New Yorker fiction editor William Maxwell always believed in Updike and that should be enough for any doubter.

The fact remains that anyone interested in life as lived in the US from the 1950s onwards should read Updike.

In fairness to Begley, who is not overly fair to Updike, he does recognise the extraordinary achievement of the character Harry “Rabbit” Angstrom’s personal odyssey in Rabbit, Run (1962), Rabbit Redux (1972), Rabbit is Rich (1982) and Rabbit at Rest (1990). Each volume reflects the changing America Updike observed so intently.

The highlights of Begley’s book occur where he quotes from Updike’s works. I read this biography, with its endless lists of the places Updike travelled to on various invitations before rushing home to fictionalise it all, just wanting to flee Mr Begley and return to Updike, ever urbane and playful, whose great source was memory and “painful experience”, whose themes are sex and death; God and religion.

Begley’s achievement is that readers will flock to Updike. After his death, my friend Caroline Walsh handed me a book. “Take this,” she said, “you will need it.”

It was a copy of Endpoint and other poems. How right she was.