A spotlight on US role in early years of Troubles

International Politics and the Northern Ireland Conflict: the USA, Diplomacy and the Troubles review 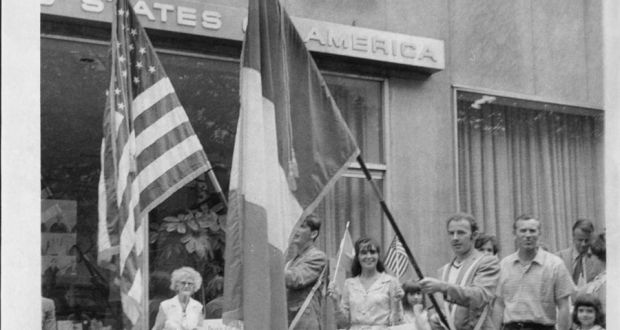 A protest in New York in July 1970 over the use of British troops in Northern Ireland. Photograph: Jerry Engel/New York Post Archives/ Getty Images

Book Title:
International Politics and the Northern Ireland Conflict: The USA, Diplomacy and the Troubles

As both the Irish and British governments struggle to come to terms with and negotiate meaningfully with the new presidential administration of the United States, it is interesting to recall that these current difficulties echo past troubles which frequently saw open tensions and mistrust disrupt the established political order in these islands. Foremost among these occasions was the early 1970s when the eruption of violence in Northern Ireland between the nationalist and unionist communities saw global attention focused on the region and inevitably culminated in American, British and Irish policymakers and lobbyists negotiating its future direction.

Alan MacLeod, author of International Politics and the Northern Ireland Conflict: The USA, Diplomacy and the Troubles, seeks to explore and analyse the various diplomatic machinations of four governments (Northern Irish, American, British and Irish) that transpired in the period between the introduction of the policy of internment in 1971 and the collapse of the Sunningdale Agreement in May 1974 through the use of recently released state papers. These were some of the most violent and politically volatile years of the Troubles, coinciding with the escalation of the conflict, the collapse of the Stormont government of Brian Faulkner, the implementation of direct rule by Westminster in the North in 1972 and culminating in the failure of the Sunningdale Agreement as a result of popular unionist opposition, which this author argues laid a political framework for the later peace process in Northern Ireland.

Having adapted this book from his PhD thesis on the same subject, MacLeod seeks to focus on the international dimension of the Troubles and in particular analyse the varied Irish, British and American political interests in the conflict. Regarding British interests, he stresses Westminster’s concern to balance the need for security and international opinion, detailing their fears that any attempt at a political agreement with the North’s moderate Catholic factions would inevitably provoke serious opposition from the loyalist community and could threaten the very fabric of British authority in Northern Ireland. Furthermore, Dublin’s contention that peace in Northern Ireland could only be achieved by a political power-sharing agreement is also systematically discussed and dissected. Therefore, the book largely focuses on Dublin’s attempt to win over British and even international support for a political solution and deals deftly with British reticence to such demands for fear of isolating the unionist population.

At the same time the threat of the Cold War meant the United States was left in the position of seeking not to openly antagonise its main European and Nato ally (Britain) by directly intervening in its internal affairs, while simultaneously resisting calls by its politically active and nationalist-leaning Irish-American population to pressurise the British government into action. MacLeod details this delicate balancing act by following a most precise timeline.

MacLeod notes, for example, that while the United States under President Richard Nixon adopted a policy of avoiding intervention in Northern Ireland for fear of antagonising British opinion and potentially further undermining the already fragile security situation, Irish American politicians regularly called for American pressure to be applied to bring about a political settlement.

Among these politicians was Ted Kennedy, whose unpredictable political manoeuvres MacLeod describes in great detail. Indeed, he quotes an article by this paper that declared Kennedy’s actions were not driven by a great desire for peace in Northern Ireland but more likely garnering domestic electoral support. MacLeod is, however, steadfast in his belief that it was largely through international negotiation on the part of these lobbyists that the Sunningdale Agreement was achieved, which created a power-sharing executive and allowed Dublin a stake in northern affairs through the Council of Ireland.

While informative and very well-researched, this book has its shortcomings. In terms of style and accessibility MacLeod makes reading difficult by using often-disjointed sentence structure and clumsy language, which serve to undermine his arguments. An example is his description on page 32 of the relationship between Jack Lynch and Edward Heath during the 1971 talks, where instead of stating his points succinctly, MacLeod’s language becomes jumbled, making the reader work hard to understand both the context and author’s argument.

Moreover, an argument could be made that an introduction that discusses the origins of the Troubles and the pre-1970s international interest in Northern Ireland would prove a useful background for the non-academic audience, while a more extensive historiography section could discuss fully how the author’s approach differs from alternative and previous historical studies.

Additionally, MacLeod remains robustly attached to his timeline and international focus and gives only token mention of the Arms Trial in the Republic in order to focus on international diplomacy, thereby minimising the importance of polarised public sentiment in favour of focusing almost exclusively on diplomatic negotiations. This narrow focus is compounded by a lack of character analysis of prominent political figureheads outside the given timeframe with the result that many of these key figures often have their own personal long-term political interests overlooked in favour of adhering to a pre-designed agenda leaving the reader detached from any anthropological perspective of the Troubles.

Subsequently, while the author successfully achieves his goal of giving due consideration to the history of this period, with an emphasis on international concern to maintain order and thereafter negotiate a political compromise, he does so within a constricting timeframe. This is to the neglect of wider economic and social implications that arose during this time. Therefore this book should be viewed not as a conclusive account of the period in question but rather a specific study of international negotiations on the Troubles during the period 1971-74.