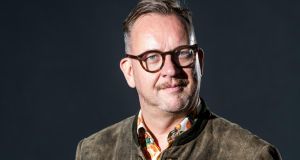 Philip Hensher: Some of his characters are going to change the world. Until they enter it properly as university students and find it is they who become changed. Photograph: Roberto Ricciuti/Getty

In Middlemarch, George Eliot writes “for the growing good of the world is partly dependent on unhistoric acts; and that things are not so ill with you and me as they might have been, is half owing to the number who lived faithfully a hidden life, and rest in unvisited tombs”. The virtues of the hidden life, the unidentified face in a group photograph in the newspaper, is a major occupation for Philip Hensher in his 15th novel, A Small Revolution in Germany.

Do you remember what it felt like to be 17? To discover a new world of opportunity, revolutionary ideas and previously unknown truths that alter forever how you perceive society and your role within it? Hensher unequivocally does and he recalls the intensity of the inevitable transformation from adolescence to adulthood with bittersweet vigour. In its essence, this novel is about the aftermath of personal awakening. If you fully commit your intellect, your heart, your soul to a political (and personal) truth that feels rapturous to you as a teenager, how do you reconcile that truth with the ensuing demands of adulthood? A little knowledge can be a dangerous thing.

Hensher suggests that the well-worn path is one of acquiescence – a trade-off of your idealism for a more pragmatic approach to surviving, and thriving, in adulthood.

Spike, the narrator of his own small revolution, is the exception that proves the rule. He recalls his school days in the 1980s, his group of passionate radical friends who are spoiling for political and social revolution. When a major in the army calls his classmate a Trotskyite, Spike feels destined to become integrated into a band of comrades who relish in debating until dawn, marching, smashing up political meetings and painting slogans on walls. They are going to change the world. Until, of course, they enter it properly as university students and find it is they who become changed.

Over the ensuing years, Spike watches as his former allies evolve into people he no longer recognises; their politics change as they each become prominent public figures as writers, politicians or socialites. Spike alone sustains the courage of his convictions, with an unalterable belief in his politics throughout the ensuing decades, as he and his partner march on. As Spike tells us, “the lives that we were to lead were set in those days in the early 1980s.” Hensher is remarkable at illuminating this evolution over a lifetime; how the shape of our world is so often drawn by our often naive and innocent adolescent hands when we are too young to know any better. Or young enough to see the truth and not feel jaded.

Ultimately Spike will attest that the road less travelled that he never deviated from – the road to revolution – has not achieved what he dreamed of and he finds himself questioning the wisdom of Elliot’s celebration of a hidden life. But are any of his old group happier for their compromises? Knowing what we do of Spike’s life by the end of the novel, would we want anything else for him? Spike’s refusal to become disillusioned is inspirational regardless of your politics – to see a man standing tall while others are buffeted about by the wind feels emboldening in our current climate.

Within the interrogation of the political lives of the characters, Hensher is exquisite at deconstructing friendship. Spike, too, declares himself “interested in the processes of friendship” and recalls Dr Johnson’s thinking on the necessity of these relationships needing constant maintenance and repair. Spike wonders if the foundations had been laid properly at the outset, would there be need for all of these subsequent patchworks? The misplaced loyalties, casual cruelties, competitive rivalries and unconditional love that is demonstrated by Spike and his cohort is meticulously drawn and so the novel is as much about interpersonal dynamics in our lives as it is about the political forces at play – although these are not mutually exclusive, of course.

Spike begins his narrative by suggesting that he liked to watch “the confident display of expertise” demonstrated by men at work. Reading Hensher encapsulates that experience of witnessing a master at work. As the reader travels with Spike to the former East Germany, or experiences his university days at Oxford, or witnesses his awkward adolescence, Hensher exhibits pitch-perfect control of the narrative with humour, grace and intellectual rigour that is worn lightly on his sleeve. His “confident display of expertise” in a novel narrated from Spike in this year of 2020 is essential reading for our time. And joyous reading too.