A Single Thread: Stunning prose that will stay with you for a long time

Book review: Tracy Chevalier’s novel on the consequences of war may be her best yet 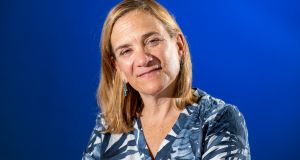 In the aftermath of the first World War, as Great Britain mourned a generation of lost men, the media coined a term for the women who would have married them – “surplus.” The 1921 Census of England and Wales reported an estimated 1.72 million more women than men and it became clear that the fortunes and fates of these “surplus women” would impact society in dramatic ways. This new demographic of single women would have to become financially independent and establish new methods for acquiring status in society beyond that of wife and mother.

Tracy Chevalier’s 10th novel, A Single Thread, is narrated by Violet Speedwell, a fictional surplus woman of the time whose perspective allows us to understand the practical realities of her plight. Through a thoughtful and arresting account of her struggle to curate a new post-war identity for herself, we understand that Violet is one of thousands of women on the brink of starvation physically, emotionally and culturally. As Violet says, “If she was to make a mark on the world, she would have to do so in another way.”

1 Coronavirus: No new Covid-19 deaths reported in State for first time since March
2 Coronavirus: What will reopen in Ireland’s phases to ease restrictions and what are the dates?
3 Man admits rape of boy after drugging him with pain relief substance, court told
4 Dominic Cummings says he does not ‘regret’ actions and behaved ‘legally’
5 André Leon Talley: How Anna Wintour threw her right-hand man ‘under the bus’
6 Tempted by a weeknight barbecue? Here’s how the pros turbocharge their grilling
7 Unidentified man has been in Irish psychiatric hospital for 30 years
8 Archaeologists are ‘quite sure’ they have found Red Hugh O’Donnell’s burial place
9 Tributes paid to Ireland’s deputy ambassador to China who died on Sunday
10 Prof Luke O’Neill: ‘It’s definitely beatable, Covid-19’
11 More than 1,000 pubs have an interest in FBD ‘test case’, court told
12 Maureen Dowd: Trump has been wearing a mask for years
13 Dominic Cummings affair reflects Brexit exceptionalism
14 Travellers arriving in Spain will not have to quarantine from July
15 Patio pleasers: 10 tips for summer plant pots that will flower all season long
16 ‘I will be alone for rest of my life,’ says woman raped as she slept
17 Teachers at Donegal school give sixth-year students a 1980s sendoff
18 Pricewatch: Left on the shelf - what we are no longer buying
19 Coronavirus: Numbers receiving pandemic payment falls as thousands return to work
20 Normal People: Paul Mescal donates chain to Pieta as RTÉ streams pass 2.5m
21 Fruit and vegetable firm obtains interim court orders against technical manager
22 UCD rules out fees refund sought by students due to Covid-19 ‘distruption’
23 Róisín Ingle: My sister Rachael dropped me at that London clinic in a black taxi
24 Tax on Covid-19 payment could cause 'terrible shock' late in year
25 Leaving Cert students must register for calculated grades by Thursday evening
26 How Jacinda Ardern’s straight talking sold a drastic lockdown to New Zealand
27 Silly Billy: What the Ikea bookcase tells us about the true cost of fast furniture
28 Ireland’s coronavirus restrictions may lift more quickly if case numbers keep falling
29 Coronavirus: People told not to make appointments to buy furniture
30 Reopening economy does not cause coronavirus spike – researchers
31 Dublin could be heaven: Frank McDonald reimagines the capital
32 Irishwoman in Vancouver: ‘I still go to the office but the city is surreal and lonely’
33 Ryanair goes to court over conduct of social welfare appeal
34 There’s absolutely no anonymity in this year’s Leaving Cert
35 Government to face opposition for plan to cut €350 Covid-19 payment
36 Temperatures expected to hit 25 degrees on Thursday
37 Maureen Gaffney: ‘Covid-19 has scored a direct hit on our most basic psychological drives’
38 Judge to re-watch CCTV evidence in Sil Fox sex assault case
39 Dominic Cummings controversy: The unanswered questions
40 Man jailed for three years for ‘barbaric’ circumcision without anaesthetic
Real news has value SUBSCRIBE