Philip Coleman, who taught Thomas Morris at Trinity College Dublin, says his debut is an important, lasting contribution to the debate on what stories can do and why they matter 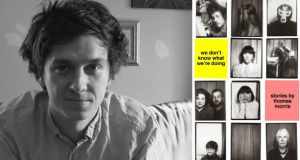 Like Richard Brautigan and Donald Barthelme, Thomas Morris is extremely adept at using language and form to test the limits of reality and to expose the absurdity of everyday experience. There are also echoes of contemporary American short story writer George Saunders throughout his work but Morris’s vision is entirely his own

“Sadder than destitution,” writes Jean Baudrillard in America, “sadder than the beggar is the man who eats alone.” Baudrillard has New York City in mind, as if to suggest that this is a peculiarly American or, indeed, a metropolitan phenomenon. However, something resembling Baudrillard’s observation occurs at the beginning of How Sad, How Lovely in Thomas Morris’s debut collection, We Don’t Know What We’re Doing. The story is set, like most of the stories in the book, in the author’s native “sleepy castle town” of Caerphilly in south Wales:

“Down by the castle, I watched an old man sit on a bench and eat a brown-bread sandwich. He was staring off, looking at the moat. Watching him, I was brought to slow, desperate tears.”

In these sentences, Morris suggests that the kind of “destitution” that has often been associated with cities like New York or London has become, in the early decades of the 21st century, a part of contemporary life, no matter where we try to make a living, from Caerphilly to Portarlington. In How Sad, How Lovely, as in so many of Thomas Morris’s stories, the reader encounters a character trying his best to survive in an environment that threatens his emotional well-being at every turn: “Some days it felt as if the feelings weren’t even inside of me. They were airborne – in Caerphilly’s stupid streets – and I just happened to breathe them in.’

Further on in How Sad, How Lovely, by which time the narrator has become “a montage of bad living”, he turns to literature for sustenance. In a brilliant description of the transformative power of reading, Morris describes the narrator’s discovery of and immersion in the works of Hermann Hesse:

“I started with Siddhartha and read it in one sitting. I read Peter Camenzind the next day, then Knulp and Wandering the day after. I finished off with Klingsor’s Last Summer, and I felt unreal. Literally unreal, as if I wasn’t inside my body any more. A notch, a dial, had rotated inside me, like on a safe. I was changed. For years, I had thought of myself as a kettle, with a little red bobbing gauge. And now I was filled again – the gauge was at my chest, and rising, rising, on the verge of flight.”

The frightening unreality of the narrator’s engagement with his social environment is changed through a chance encounter with the work of a German-born Swiss author who died more than 50 years ago. Hesse’s books give him a whole new sense of the value of what it means to live and to “commit our lives to finding meaning”.

The stories in We Don’t Know What We’re Doing are deeply concerned with this search, and they are the work of an author who has made a profound commitment to the pursuit of meaning in places that are, in many respects, the marginal and overlooked zones of contemporary life. A decade or so ago Tom Morris studied English literature and philosophy in Trinity College Dublin, and I was fortunate to have an opportunity to work with him then when he took a course I taught at the time on American short fiction. This may have been where he first read the works of Richard Brautigan and Donald Barthelme, two American writers whose works are quoted as epigraphs to We Don’t Know What We’re Doing. Whether he first encountered them there or not, Morris’s book continues and advances the work of those great American authors, and especially in terms of their attempts at representing the experience of different kinds of social and personal alienation in narrative forms that are as strikingly original today as they were when they were first published.

Like Brautigan and Barthelme, Morris is extremely adept at using language and form to test the limits of reality and to expose the absurdity of everyday experience. There are also echoes of contemporary American short story writer George Saunders throughout his work – Nos Da, in particular, might be read as Saunders’s story, Brad Carrigan, American, refracted through a south Wales lens – but Morris’s vision is entirely his own. It is his own in part because of the bleak novelty of his primary setting – on one level Caerphilly is just like any small town in Wales (or Ireland, for that matter), and yet there is nowhere else quite like it.

What makes the stories of We Don’t Know What We’re Doing important, however, is not any sense of local colour they impart. Rather, it is the sense that in reading these stories we are in the company of a writer and a storyteller who believes absolutely in the human value of writing and in Joan Didion’s claim that “we tell ourselves stories in order to live”. As Richard Brautigan puts it in the first epigraph used in Morris’s collection: “There has to be talking. That’s what people do, they talk.” In We Don’t Know What We’re Doing Thomas Morris has made an important, and lasting, contribution to the conversation about what stories can do and why they matter.

Philip Coleman is an associate professor in the School of English and a Fellow of Trinity College Dublin. His most recent books are Critical Insights: David Foster Wallace (2015) and John Berryman’s Public Vision (2014)

We Don’t Know What We’re Doing by Thomas Morris is published by Faber, at £12.99. Hodges Figgis offers a 10 per cent discount to Irish Times Book Club readers.

This month, we will be exploring the stories with articles by the author, critics and fellow writers. The series will conclude with a podcast discussion with the author; Martin Doyle, assistant literary editor of The Irish Times; and Sorcha Hamilton, to be recorded at a live event in the Irish Writers Centre, Parnell Square, Dublin, on Thursday, January 28th, at 7.30pm.

Morris is editor of The Stinging Fly magazine and edited Dubliners 100, a Tramp Press collection of stories updating James Joyce’s original to mark its centenar