A prisoner of its past? The future of the Long Kesh/Maze

Home to 10,000 prisoners over 30 years, the 347-acre site was earmarked for a €381m investment but political division over how to handle its heritage has led to stalemate 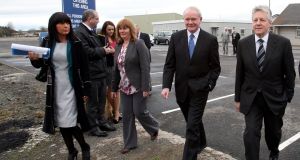 The Long Kesh/Maze Prison is not only home to the heritage of the hunger strikes. Today these 347 acres are also Northern Ireland’s largest development site in public ownership. As the Stormont Executive has statutory responsibility to redevelop the site, planning for – and arguing about – its future shows how conflicting economic, political and historical interests play out in practice.

Over its time as an internment camp and prison (1971-2000), Long Kesh/Maze Prison held some 10,000 men, a tremendous number relative to the size of Northern Ireland. It closed in 2000 with the release of loyalist and republican prisoners sentenced prior to the 1998 Good Friday Agreement. Ownership was then transferred to the Office of the First Minister and Deputy First Minister (OFMDFM). By 2011, the site had incurred expenditure of almost €27 million. Expenditure from August 2013 through March 2014 was more than €2.2 million, as it was for the tax year 2014/5. From April through December 2015 almost €1.5 million was spent.

Yet there is remarkably little to show for it. A sample of prison buildings, including the hospital wing where the hunger strikers died in 1981, was listed for preservation. However, ministerial permission for access is not easily forthcoming. Meanwhile 65 acres were given over to the Royal Ulster Agricultural Society for its annual show and relocation of an exhibition facility. Two hangars, built during the second World War for the Long Kesh airfield, are used by the Ulster Aviation Society, and there is now an adjacent cycle lane and walkway, as well as a couple of new bus shelters.

Otherwise most of the land lies fallow after decontamination and levelling, despite appealing to economic interests with projection of up to 5,000 permanent jobs and €381 million of investment. A proposal for a multisport stadium, signed off by the main sporting bodies, fell apart in 2009 after competing demands for separate developments elsewhere and opposition especially from football fans citing practical concerns about the choice of site. Ambitious plans for a peace centre were later suspended, despite a promised €23 million of EU money and likely linkage to the nascent European Institute for Peace.

The most obvious barrier to redevelopment of the site, of course, lies in the politics of Northern Ireland. While the land is, in broad terms, publicly owned, the owner in practice is a development corporation accountable to the OFMDFM. The corporation, as emphasised to me by one of its officers, cannot act without agreement of both the First Minister and Deputy First Minster. In short, ministers from two parties, the DUP and Sinn Féin – often at loggerheads on issues related to the past – have to agree on all elements of the redevelopment.

However, the issue here is not the past, although Northern Ireland’s past is certainly contentious. The issue is, in fact, the current institutions at Stormont. The 1998 power-sharing arrangement ensures that all major parties can take part in government. By design this system was meant to end a protracted conflict and provide stable institutions to keep parties at the political table. In other words the primary purpose of power-sharing is to ensure participation in government rather than deliver on policy. The impasse regarding the Maze redevelopment is the result of the political interests built into power-sharing.

This does not discount the impact of history. No other place in Northern Ireland encapsulates the scale of angry division to the same extent. For some, the prison held political detainees, hunger strikers were heroes and those who died martyrs. For others, the incarcerated men were terrorists and criminals who chose their violent and bloody path.

However, it is important to recognise that history is not the same as heritage. To borrow from Brian Graham, Emeritus Professor at University of Ulster, heritage is how a society uses the past as a resource. The site’s past is important not because of its history but because of its heritage, or in other words, the present-day use of this past. The use of this heritage as a political resource is evident throughout republican commemoration. Explicit references to Long Kesh, the hunger strikes and the prison buildings known as H-blocks repeatedly appear in murals, memorials, anniversaries, speeches, books and songs.

The relationship between a proposed peace centre and the former prison shows how controversy about heritage, speaking for different historical interests, plays out in practice. Sinn Féin has consistently invoked the site’s past as an indispensable resource for education about peace for the future. Indeed Sinn Féin has, to date, been adamant that nothing more at the site will be agreed until a peace centre is firmly on the cards. Meanwhile DUP representatives insisted that the new centre would be a completely separate development from the retained prison buildings.

Peace centre plans were, however, indefinitely paused in 2013 when the necessary cross-party consensus dissolved in acrimony. To a significant degree, this was because DUP assurances were not enough to counter objections from other unionist parties as well as organisations representing some victims’ families, prison officers and former police officers. Then, in 2014, a ruling by the Information Commissioner forced the release of a confidential marketing study. Its recommendation to the OFMDFM was clear – “[Prison] buildings, combined with a new purpose built exhibition and conference centre, will house the activities provided by” the peace centre. While this was an advisory report, not policy, the result was a further hardening of opinions about the site.

The future of the Long Kesh/Maze site depends on how different interests in arguing the past are brokered. So far, contemporary politics with its roots in recent history have trumped economic interests. However, the ongoing peace process grounded in the Good Friday Agreement is a negotiated settlement in which all the major players compromise. This negotiating in the present also necessarily means negotiating with the past. Heritage, the present-day use of the past, cannot be exempt from this process if it is contribute to a peaceful future for Northern Ireland.

Dr MK Flynn is Senior Fellow at the Center for Civic Engagement, Bard College, US