A poem a day online 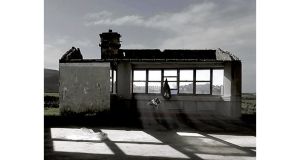 A Still from Great Good Places, by Ailbhe Ni Bhriain, part of the Poetry Project

WORD FOR WORD: To see the summer sky Is poetry, though never in a Book it lie. True poems flee.

Emily Dickinson was right. And true poems have been fleeing and in flight on the PoetryProject website since January 1st. The project is one that the art critic Gemma Tipton and I have been involved in for almost a year, since she first suggested a collaboration between poets and artists that would become a kind of online anthology.

The suggestion had immediate appeal: word and image have always had a close relationship; there are many examples of personal and creative bonding between poets and artists, sometimes, not always, the result of a shared sensibility or impulse.

There is a canvas by El Greco of St Luke, the patron saint of painters, in which Luke holds a paintbrush in one hand but also, in the other hand, a book, signifying something of the bond that exists between the two art forms. The artists in this project have turned their hand to the video camera and animation studio.

In the fresh days of 2012, our initial ambition was, in retrospect, a daft one: a poem to go out online from Ireland every day of this year. Common sense, self-preservation and limited funding prevailed, and the idea was scaled down to a poem a week, each week, during the course of Ireland’s EU presidency.

Funding has come from Culture Ireland’s resources for the presidency cultural programme, with additional support from Foras na Gaeilge to include poems by a number of Irish-language poets.

Both Joseph Woods, the director of Poetry Ireland, and Patrick Murphy of the Royal Hibernian Academy, with their respective organisations, joined us as partners, as did Kinsale Arts Festival, which will screen all 36 films in July.

This was not going to be another best-of selection, nor indeed was I seeking to emulate any other anthology of Irish poetry in choosing classic anthology poems. In making the choices Joe Woods and I had in mind poems that, as well as being work of quality, would be visually rich – after all, the process of collaboration involves the artist picking up the frequencies of the poem to create their own images in response to the words.

As the films so far have shown, these responses are not always necessarily recognisable as being of the thing the poem speaks about. The purpose of the videos is not simply to describe the poems in visually literal terms, though some artists may choose to do that.

Those of us involved have been gratified by the initial response. Since it began with Brendan Kennelly’s Begin, almost 3,000 subscribers from Ireland and abroad have signed on in the first month.

To receive the poem and video by email every Monday, see thepoetryproject.ie. It is free and, as one addict put it, a delightful and surprising way to begin the week.