A long gaze back at Norah Hoult on her 117th birthday

Sinéad Gleeson, editor of The Long Gaze Back anthology of Irish women writers, profiles Norah Hoult, one of the authors whose work deserves to be better known 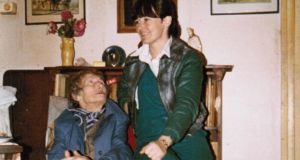 Norah Hoult and her friend Nuala Nally: “Norah Hoult is a very good example of a woman writer who falls completely out of fashion and is forgotten. She was an absolutely brilliant writer,” says Persephone publisher Nicola Beauman. Photograph: Nuala Nally 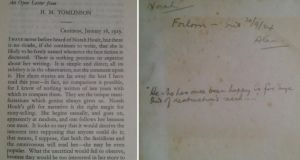 Norah Hoult’s copy of The Oxford Book of Victorian Poetry. The dedication to her is from a man called Alan, with one word – “Forlorn”. He also quotes a Wilfred Blunt poem: “He who has once been happy is for aye / Out of destruction’s reach”. The 1931 edition of her first short story collection Poor begins with an open letter of praise from HM Tomlinson, left 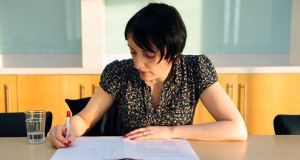 Sinéad Gleeson: The book’s title comes from Maeve Brennan (whose story, The Eldest Child, is included): “The Long Gaze Back is always turned inward.” The 30 voices here do just that, and reflect back hundreds of lives and experiences to help us to make sense of the world through fiction. Photograph: Aidan Crawley

On this day 117 years ago, Norah Hoult was born in Dublin. You’ve probably never heard of her, but she has come to mean a lot to me. Born in 1898 to an Irish Catholic mother and Protestant father (who had eloped), Hoult was an outsider from an early age. After both parents died when she was very young, she and her brother were sent to boarding school in England. Hoult was also a writer, of 24 novels, four short story collections and worked for a time as a journalist.

For all that, the only in-print work of hers is a novel, There Were No Windows, published by London’s Persephone books. Both bookshop and publisher (of gorgeous editions, each with unique endpapers and matching bookmark), Persephone has devoted itself to publishing forgotten women writers. I visited the shop last year to record a piece for The Book Show on RTÉ Radio One. Owner Nicola Beauman is erudite about women’s writing and proud to publish Hoult’s work. “Norah Hoult is a very good example of a woman writer who falls completely out of fashion and is forgotten. She was an absolutely brilliant writer and well-known at the time in a way she isn’t now”.

Beauman’s words really struck me, not least because I was in the middle of editing The Long Gaze Back: An Anthology of Irish Women Writers. At the end of 2013, I began the process of putting together the 30 stories that would become the book, and from the start, I wanted to include deceased writers. In Irish literature there is a pendulum swing: from the regularly championed Elizabeth Bowen and Mary Lavin to the lost writers of the past, whose names are no longer spoken.

The more I explored, the more writers I found, but the work itself was often difficult to locate. Countless afternoons were spent trawling online, or filling out request forms in the National Library. I first encountered Hoult’s work in the predecessor to this book, Cutting the Night in Two, edited by Evelyn Conlon and Hans-Christian Oeser. It’s an incredible collection brimming with famous names and unfamiliar ones (it’s also where I discovered the wonderful Juanita Casey). Without that anthology, I would not have explored Hoult’s other writing, realised the volume of her work, or her incisive way of writing about women’s lives. There was no doubt she was ahead of her time, and in her book Irish Women’s Fiction: From Edgeworth to Enright, Heather Ingman says Hoult “employed the popular novel for feminist protest”.

All I had was Norah’s work itself, as well as reams of notes. Photos of her are scarce, and in my head, she consisted solely of words and pictures as someone long forgotten by most people. When I started to have conversations online about this book, a friend got in touch to say that his mother knew Norah. Would she talk to me about her? Sure.

Nuala Nally got to know Norah through an aunt, and Hoult lived in a cottage in Blacklion, Greystones. When a tree fell in her garden, Nuala was despatched to help chop it up and a friendship developed. “I called on her every two weeks over a period of three to four years. She never mentioned that she was a writer at all, but I knew. We’d go for a drink – she loved whiskey – but was banned from a couple of pubs because she was outspoken and rowdy. She was also an inveterate smoker, and smoked in bed so her blankets were full of cigarette burns. The cottage was pretty but old-fashioned, and over-run with mice. Once she offered me a biscuit with my tea, and there was a dead mouse in the tin. Without flinching, she said, ‘Oh, I think rigor mortis’.”

Norah counted James Stephens and Oliver St John Gogarty among her friends, and apparently Yeats, upon seeing her at a party asked someone, “who is the woman with fine eyes?” She was briefly married but upon realising she was expected to cook and do domestic chores, she walked away. Nally suspects there may have been another man in her life, and Hoult gave her a copy of The Oxford Book of Victorian Poetry. The dedication to Norah is from a man called Alan, with one word – “Forlorn”. He also quotes a Wilfred Blunt poem: “He who has once been happy is for aye / Out of destruction’s reach”.

Nicola Beauman says Hoult was both known and regarded in the 1930s and ’40s. The 1931 edition of her first short story collection Poor begins with an open letter from HM Tomlinson.

“I have never before head of Norah Hoult, but there is no doubt, if she continues to write, that she is likely to be freely named whenever the best fiction is discussed. There is nothing precious or superior about her writing. It is simple and direct; all its subtlety is in the observation, not the comment upon it. Her short stories are far away the best I have read this year – in fact, no comparison is possible, for I know of nothing written of late years with which to compare them. They are the unique manifestations which genius always gives us.”

When Miss Coles Made the Tea, her story in The Long Gaze Back, deals with class and disability, office politics and working women’s lives. It’s brilliantly observed and Nuala Nally feels that this is why Hoult’s work still impacts on a reader. “She was very good at character because she was a great listener and observer. The way she perceived people helped her create characters, and in simple ways, she deals with ordinary people.”

For me, anthologies are a place of discovery: a way of finding writers long consigned to the back shelves or being introduced to new voices on the cusp of their literary life. The Long Gaze Back is as much about acknowledging the pioneering women writers of the past, like Maria Edgeworth and Somerville & Ross, as it is about applauding established writers like Anne Enright, Christine Dwyer Hickey, Anne Devlin, Mary Costello and Eimear McBride. Anthologies also give platforms to vital new names like Eimear Ryan, June Caldwell, EM Reapy, Siobhan Mannion and Lisa McInerney. This is an Irish collection, but one that moves from Dublin and Belfast to the sticky heat of Egypt; to an updended life in France and formative years in Germany; homesickness in Melbourne and the din of Italian cafés. There is adventure and emigration, death and painting, mothers and nightclubs, sex and neighbours. The book’s title comes from Maeve Brennan (whose story, The Eldest Child, is included): “The Long Gaze Back is always turned inward.” The 30 voices here do just that, and reflect back hundreds of lives and experiences to help us to make sense of the world through fiction.

The Long Gaze Back is published on September 10th by New Island, priced €19.99. There will be readings from it at 7.30pm in Hodges Figgis, Dawson Street, Dublin. Martina Evans reviews the anthology in The Irish Times this Saturday, September 12th