A great, entrepreneurial Irish engineer: more like him, please

A nuanced view of William Dargan and his great legacy 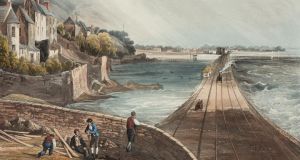 Rock of the bay: a Dublin and Kingstown locomotive approaches Blackrock, in Co Dublin, in 1834; Dargan’s stonework survives on the line. Image: SSPL/Getty

Book Title:
The Flower of Empire

This biography tells the story of William Dargan, the greatest Irish railway engineer and contractor of the first and most important phase of Irish railway development, between the 1830s and 1860s. Dargan built a phenomenal 1,335km of track, including substantial sections of the major routes still in use today.

His work can be seen in the surviving stonework on Ireland’s first passenger line, the Dublin and Kingstown Railway; on the beautiful Craigmore viaduct, north of Newry; the train shed at Heuston Station; and the tunnel on the final part of the line into Cork, each of which pushed Irish engineering to new frontiers.

Although Dargan’s personal papers have not survived, Fergus Mulligan has left no stone unturned tracking down relevant material, which touches mostly on his working life, initially building roads and canals, but largely constructing railways.

Mulligan has failed to nail the location of Dargan’s disputed birthplace, in Laois or Carlow in 1799 – he appears to have more empathy with the case for Carlow – but he has certainly exploded the myth that Dargan died bankrupt.

Although his finances were complex, it is clear that he reinvested a significant share of his accumulated profits in railway ventures. These were frequently sold on some time after the project was up and running, and the released capital rolled into the next venture. This was particularly the case with the Dublin, Wicklow and Wexford Railway, which had precarious early finances.

It faced major engineering challenges, including the completion of the line around Bray Head, perhaps the least glorious chapter in the career of the celebrated British engineer Isambard Kingdom Brunel. The route through the hills of Wicklow required further innovative engineering and significant unanticipated costs. En route, Dargan helped develop Bray as a seaside resort, also reclaiming the Wexford sloblands.

Mulligan’s research has shown that Dargan’s roles as a railway financier were almost as significant as his engineering. Many lines, including the Dublin, Wicklow and Wexford, would simply never have been completed without his financial input.

It took some time after his death to unwind his assets, and all his creditors were fully paid off, with a healthy surplus left over, which kept his wife in comfortable circumstances and covered his other legacies.

Dargan was a wealthy man by the 1850s, and he invested his fortune more constructively than many of his fellow rich, claiming to have employed (perhaps with some exaggeration) 50,000 men during the height of the Famine, in 1848, in multiple railway and other ventures. Mulligan has lauded Dargan’s role as an employer, yet the many fatalities recorded in this book indicates that he was an employer of his times, with a somewhat cavalier approach to safety.

A less laudatory Karl Marx noted six fatal accidents and 60 mutilations at Dargan’s flax mill in Kildinan, in Co Cork, between 1852 and 1856, pointing out that this might have been reduced with some minor investment in protective appliances. Dargan was also quite ruthless with workers who went on strike, whom he rarely rehired. Mulligan, however, concludes he won the respect and affection of most of his employees.

As an exemplary Victorian entrepreneur, Dargan was happy to inject capital into the Great Industrial Exhibition in Dublin in 1853. Queen Victoria, in appreciation, visited his mansion at Mount Anville, in south Dublin, for half an hour, taking tea and admiring the fine views over Dublin Bay. Dargan turned down her offer of a title.

He was later honoured by a subscription raised to build the National Gallery of Ireland, in 1864; the Dargan statue still stands facing Merrion Square. A few structures still bear his name: Dargan Bridge in Co Carlow; Dargan Terrace in Bray; and the more recent Dargan Bridge in Belfast.

The long cut he made to improve access to Belfast Harbour and the resulting seven-hectare island of spoil that appeared on the Co Down side were initially named Dargan’s Cut and Dargan’s Island, but these were quickly changed to the Victoria Channel and Queen’s Island.

Mulligan has revisited many of the locations of Dargan’s engineering feats. This exploration provides some interesting digressions, but in places these can disrupt the narrative. Overall, though, Mulligan’s research is scholarly and accessible.

He has some interesting cameos on the exacting nature of Dargan’s working days and his long journeys across Ireland to his projects, either by horse or in the “Dargan saloon”, a railway carriage drawn by a private locomotive, which doubled as a moving office and temporary accommodation.

In 1847, for example, he was building lines from Thurles to Cork, Limerick to Tipperary, Belfast to Ballymena, Newry to Portadown and Warrenpoint, and Carlow to Bagnalstown, in addition to a line from Liverpool to Bury. He was also employing 1,500 men on the 1,500m cut into Belfast Harbour.

In painstakingly drawing together the surviving evidence to complete this biography Mulligan has undertaken a major challenge, which few others could have contemplated, let alone successfully concluded. We have been left with a far more nuanced view of Dargan and his engineering legacy.

Andy Bielenberg co-wrote with Raymond Ryan An Economic History of Ireland Since Independence.