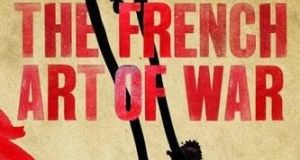 Sometimes one shocking visual image will finally shake even the laziest, most apathetic, self-absorbed cynic out of an all-encompassing stupor. In the case of the unnamed narrator of Alexis Jenni’s spectacular debut The French Art of War, a graphic, 612-page blockbuster exposé of his country’s squalid past – including Vichy, Indochina and the rape of Algeria – wake-up time for him occurred when, pretending to be ill, he skived off work and stayed in bed to watch television with his then girlfriend.

Instead of choosing a box set, however, he tuned into news coverage of the Gulf War. Prior to that, he admits, he had given only minimal consideration to the French army: “We wonder why they do it, this tainted job steeped in blood and death.”

That slick little observation reveals a great deal about the acidic narrator, the kind of guy who specialises in reflex rhetoric. On noticing that severe snowstorms were affecting the part of France from which he came, he opportunistically pretends to have gone home and informs his employers he is trapped. “I phoned the office 300 metres away and claimed to be 800 kilometres away amid the white hills being shown on the news. Everyone . . . knew I was from the Rhone, the Alps.”

In addition to being a liar, he regards France as violent, racist and aggressive, a country which exists mainly through its language: “France is the French language.” He is also disturbed and has a frenzied approach to life. Exactly why he destroyed his wife’s carefully-planned dinner party by presenting their horrified guests with the barely-cooked entrails of assorted animals is not quite explained.

Visions he experiences while gazing at display cabinets containing frozen meat suggest all is not well with him. Elsewhere a brilliant comic sequence features his attempts to purchase, at an all-night pharmacy in racially tense Lyons which appears in danger of becoming besieged, medication for his sore throat. “In France we know how to hold a first-rate protest march,” he muses.

The meat is a clue and leads Jenni to his prevailing theme: the utter disregard for life and the speed with which people reduce others to lumps of flesh. This is an immense, important, blood-drenched and intoxicating opus with an ambitious theme: war and the ways in which the French perpetrated it.

Even more potent is the realisation that Jenni is confronting the ease with which humans cease being human. The narrator sets the scene by recalling his messed-up life in the 1990s, which then acquires some level of direction through a chance encounter with a much older man, a soldier who had served France throughout his life regardless of his moral doubts: “There were only comrades and enemy meat.”

It would be easy to dismiss the narrator as yet another smart Alec Everyman ready to sneer at the world – “The big news on TV was Operation Desert Storm, a code name straight out of Star Wars, cooked up by the scriptwriters of a special Cabinet” – but he is not. French forces joined the assault intended to oust Saddam Hussein from Kuwait, and this dawning intelligence activates a response from the narrator.

Spending the immediate aftermath of his redundancy delivering junk mail, he falls into a routine of going to a bar and getting drunk with older men who are better drinkers. Among the regulars is Victorien Salagnon, a local legend who had seen action as a youth in the Resistance during the second World War and was later to have his humanity tested in Indochina and, most horrifically of all, Algeria. From his first appearance in the novel, Salagnon, who is an artist, appears as a wry fallen angel of sorts, doomed to survive.

“For that smile you forgive him everything. You forget the harshness of his features, his military crop, his cold stare, his terrible past; you forget that he has so much blood on his hands,” concedes the narrator, who strikes a pact with him: the artist will teach the narrator to paint and, in exchange, the narrator will write his story, which is comprised of violent memories. Not surprisingly, if heavy-handedly, his wife is named Eurydice, in Greek mythology a daughter of Apollo and wife of Orpheus.

This winner of the 2011 Prix Goncourt is big, repetitive, theatrical and unabashedly polemical, yet Jenni has achieved something strange, demanding, occasionally melodramatic – usually when the narrator goes into overdrive and reports on his sex life – and mesmerising. It is a forthright bellow, overwhelmed with passion, rage and detailed description. The stronger element, the war sequences, are so vivid one would think that Jenni, a biology teacher with a lucid grasp of history, had actually served in a war.

Already recognised as an outstanding translator from French and Spanish, Sligo-born Frank Wynne’s work on this dense, curiously symphonic text amounts to a miraculous feat and conveys the tonal contrasts which are crucial in a work drawing so heavily from known and contentiously reported fact.

It soon becomes clear that aside from the choreographed set pieces at the dinner party and the all-night pharmacy, the narrator is merely a conduit – increasingly irritating, but no matter. He tells the story of Salagnon’s life, from schoolboy translating his Latin texts to elderly survivor enduring his memories and the ghastly pictures in his head. Yet he had a release: he continued to sketch and paint, and even made pencil drawings while in battle – a homage, perhaps, to German artist Otto Dix. Jenni is good on visual description of jungle terrains, foul conditions, rotting corpses and the detritus of war but far less convincing on the art which sustained Salagnon, who had even been taught brush work by a Chinese master in Hanoi.

Salagnon had watched his vile father collaborate with the Nazis and, having been trained to kill as a teenager with the Resistance, ironically attempts to retain some humanity. Throughout much of his life, a shadowy uncle, also a soldier who had devoted his energy to learning to recite Homer, had influenced Salagnon’s thinking and subsequent career. While the narrator’s sequence tails off into angry, digressive discourse, the war sequences, particularly concerning Algeria, are spellbinding. There are echoes of Camus as well as Denis Johnson’s Tree of Smoke and Viet Thanh Nguyen’s The Sympathizer. Although neither as elegant nor eloquent as Mathias Énard’s Compass, The French Art of War is bold, brave, magnificent and repellently wayward as well as conversational – difficult to put down and impossible to forget.