Jeremias Gotthelf’s parable about good and evil, fear and courage has enduring power 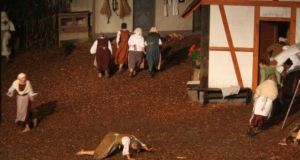 Living on: a Swiss production of The Black Spider

More than a century after its first publication The Black Spider (1842), a morality tale intended both to terrify and to instruct, was lauded by Thomas Mann, who in 1949 said of it, “There is scarcely a work in world literature that I admire more.” As jacket quotes go, it is highly effective.

But many will read the story long before becoming aware of Mann’s endorsement. Written by a Reformist Swiss pastor, Albert Bitzius (1797-1854), who described writing as a struggle that for him was liberation, it cleverly blends elements of the fairy tale with cautionary advice about how to pursue a godly life. It should read as a straightforward polemic yet does not because Bitzius, who took the pen name of Jeremias Gotthelf after the success of his first novel, The Peasant’s Mirror, or The Life History of Jeremias Gotthelf (1836), believed in the power of the imagination.

As a Swiss German he also wrote in the Bernese dialect, which renders his prose very correct and lavish. So richly bucolic is the descriptive opening sequence that one might abandon this tenacious novella. “Above the mountains rose the sun, shining in limpid majesty down into a welcoming but narrow valley, where it woke to joyous life creatures that had been created to take pleasure in the sunshine of their days. From the forest’s gilded edge the blackbird trilled its aubade while the amorous quail intoned monotonous minnelieder from amid the flowers sparkling in the dew-bespangled grass, and high above the dark firs, lusty crows danced nuptial roundelays or else cawed tender lullabies above the thorny little beds of their unfledged chicks.”

Pity the translator faced with such sugar. But Gotthelf’s intentions are clear: he wants to establish an idea of an idyllic paradise before it all goes terribly wrong. Man and nature are living in harmony, and in this valley life is about to be further blessed by the christening of a baby. The preparations are almost complete, and it is a day in which the usual notions of thrift are to be ignored as the lady of the house, the proud mother, instructs her servant to be generous with the coffee beans: “Don’t roast the coffee so dark today, people might think I was trying to stretch it . . . Half a pound more or less makes no difference today.” The baby is to be carried to church, not driven, because the infant’s grandfather has a theory “that if a child is driven to its baptism rather than carried, it grows up lazy and never learns the proper use of its legs”.

While the hostess, the anxious and exhausted mother, frets and the young godmother, having survived vast amounts of food being thrust upon her, glances at the young godfather, the rest of the gathering is in great good humour. A moment of panic at the church, when the godmother realises that she does not know the name and the bad luck it will cause, is humorously averted as the parson had been informed and there is no need to consult the godmother.

In this atmosphere of ritual and superstition, as well as competitive hospitality, the guests begin chatting. Before long the handsome farmhouse building is being complimented. It takes a chance comment about the use of an old and rather ugly window post for the mood to change. There is a story to be told about the window post, and it is one that Gotthelf’s narrator, the grandfather, is reluctant to share, but after some evasion he proves quite a storyteller.

He immediately sets the scene back in the distant past, to a time when mercenary knights wandered freely before eventually falling in with a lord, preferably one in possession of a castle in which they could settle instead of fighting battles in desert lands. Suddenly Gotthelf’s yarn belongs to a very different world. The grandfather refers to the various knights that came and went before one in particular, the most brutal of all, Hans von Stoffeln of Swabia, arrived.

He decided to build a castle up on the hill. This was unusual, as most castles were built along the road. But this castle was different, as was von Stoffeln. He was a savage, as was his circle of knights. The grandfather tells the guests about how those villagers of long ago were ordered to build the castle and then, just when they were about to harvest their crops, were presented with an impossible task – move 100 mature beech trees from another mountain to the new castle and make an avenue. Were any of the trees to wither, the peasants would die.

Help comes in the form of a terrifying stranger dressed as a huntsman, who in exchange for his services demands the soul of an unbaptised infant. There are no prizes for guessing his true identity. The villagers are horrified. Among them is Christine, a tough, resourceful outsider who married into the community, and she alone believes she can outwit the huntsman. He asks her for a kiss, and she obliges. The huntsman goes about moving the trees, and the only one able to watch him without being damned is a young boy “beloved of God and man . . . He saw the beeches flying up from the ground there, each drawn by two flaming squirrels, and beside them he saw a green man riding a black billy goat, a fiery scourge in his hand, a flaming beard on his face, and, swaying atop his hat, a feather red as glowing embers. The procession flew through the air high over hill and knoll.”

It is a vivid, extravagant image, and as the narrative continues the writing becomes increasingly dramatic. Gotthelf was writing during the Biedermeier period, when literature tended towards the apolitical. This suited him, as his message was religious, his motives moral. Often compared with the short-lived Edgar Allan Poe (1809-1849), Gotthelf is more didactic yet also way ahead of his time, as Freudian critics would have a field day with many of his narrative motifs. Christine is both a traditional and modern anti-heroine. Yet she not only fails to fool the Devil but also becomes his servant. His revenge on her and, through her, the community is appalling. The narrative structure is also highly original, as Gotthelf allows his listeners and readers to pause and absorb what has happened before introducing a second internal layer to his story.

Best of all, though, is the narrator, who is aware of his family’s dark secret and believes that it is better to tell the truth than to encourage speculation. “Nowadays people are quick to forget what they’ve heard, no one remembers things the way we used to.” It is a telling remark and also a timeless one, as is The Black Spider, which has inspired two operas: the Swiss composer Heinrich Sutermeister’s 1936 version and Judith Weir’s 1983 production, as well as several film versions.

Best of all, though, is its enduring power as a parable about good and evil, fear and courage, while Gotthelf, moral and religious teaching aside, emphatically demonstrates, through his clever shifts of tone and language, the allure of story as an art form in this daring novella that reads as if the storyteller were sitting in the room, remembering the facts and watching our faces.