Canadian novelist Jane Urquhart, who had a cottage in Kerry for 20 years, has finally written a book set there. What took her so long? 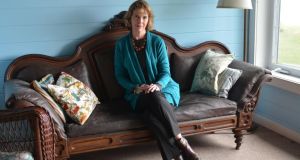 Jane Urquhart: ‘The Rás seemed to me to be a mythic thing when it began in the mid-1950s. God. The weather. And the potholes.’ Photograph: Stephen McCarthy

Jane Urquhart is indisputably a Canadian novelist. She was born in Ontario. She shares an editor with Margaret Atwood and Michael Ondaatje. She has won the Governor General’s Literary Award and France’s Prix du Meilleur Livre Étranger.

So what is this quintessential Canadian doing writing a book set on Kerry’s Iveragh Peninsula, following the cyclists of the Rás Tailteann as they sprint around Ireland in the 1950s?

It’s not that Urquhart’s ninth novel, The Night Stages, is without a Canadian dimension. It opens with a woman, Tamara, who has left her Irish lover, Niall, to return to North America, only to find herself stranded at Newfoundland’s Gander International Airport in dense fog.

The book takes flight in flashbacks that focus on artist Ken Lochhead as he paints a giant mural on the terminal walls of Gander in 1958, and on Tamara’s memories of Niall, especially what he has told her about his troubled brother, who disappeared after they cycled the Rás Tailteann together.

The “night stages” refers to the drinking sessions indulged in by the fearless (or foolhardy) cyclists. This ambitious book embraces some very large themes, among them emigration, the nationalism of young countries, the role of memory in the concept of home, and the nature of the family. As always with Urquhart, the work is also drenched in landscape – here the fields and hedgerows of the Iveragh.

Why it took 20 years

Urquhart had a cottage in the mountains near Mastergeehy for 20 years and has spent a great deal of time there, but this is the first time she has written in such detail about Kerry.

She offers a wry smile. “I’ve noticed that the Irish are pretty good at writing about themselves. I don’t think they need me to come and do it for them.”

The idea for The Night Stages took root when Urquhart was a writer-in-residence in St John’s, Newfoundland, and come to know the extraordinary modernist terminal at Gander International, where many transatlantic flights once stopped to refuel.

“It struck me that everybody who had gone to North America from Europe, and vice versa, had stopped there at one time or another,” she says. “There’s something a bit nationalist about it, too, in that Newfoundland only became part of Canada in 1949. And by the time they were building this terminal, Canada had entered a period in which it was very self-consciously trying to promote its own image and culture. It seemed like a more hopeful and happy era, somehow.

“And then, of course, the planes start to fly over it, which seems like an extended metaphor, with this overlooked work of art which has been sitting there all this time, and is hardly seen by anybody now.”

How about the the race’s status as an all-Ireland event, which was, to put it mildly, complex and divisive?

“Yes. I tipped my hat to that. It was terribly tempting to go down that route, but I said, ‘Jane, that’s not your story.’ ”

Among its cast of characters are a number of real people, including the painter Ken Lochhead, who was a friend of Urquhart’s husband, Tony, himself a painter. There is also the Kerry poet Michael Kirby, whom Urquhart met in Ballinskelligs two decades ago.

“I knew him until he died,” she says. “A fantastic person. Intelligent, spiritual, humorous and serious; a person who delighted in informing you about the natural world as seen through the Irish language; he was a kind of teacher for me. Although he was not a bicycle coach. I made that up.”

Weather forecaster Brendan McWilliams also makes a guest appearance, in the guise of Niall’s boss. This gives Urquhart an excuse to use snippets from McWilliams’s Weather Eye column for The Irish Times.

One of the most striking aspects of The Night Stages is a tendency to collect, and offer to the reader, various landscape-related bits and pieces: scraps of poetry, excerpts from geology books, weather lore and, of course, Urquhart’s observations of the natural world.

She has published four volumes of poetry as well as nine novels. Does she have to rein herself in when it comes to prose descriptions of nature?

“I suppose I delight in it to such an extent that I . . . well, I count on my editor, Ellen Seligman, who pulled me out of a slush pile years ago and who has on occasion let me know that I’ve gone a little too far,” she says, with another of her wry smiles.

Sometimes, she adds, even a ninth novel can take its author by surprise.

“In my life I would never have believed that I would have written about sport in any way. And it was positively life- enhancing. I think I understand more now about what it is that draws people – and of course, living in Kerry, people are pretty obsessed by football – and the mythological aspect of it. That was one of the things the book did for me.”

So we will soon see her in Fitzgerald Stadium, waving the green and the gold?

“Well, I don’t know whether we should take it that far,” she says. “I’ve lived in Canada all of my life and I still haven’t been to a hockey game. That should tell you quite a lot.”

Marian Keyes: ‘I thought when I stopped drinking my life was over. It was just beginning’
5