The Girl on the Train tops charts, with Anne Enright, Joe Duffy, Jim McGuinness, Colm Tóibín, Irelandopedia in top 10 and Irish market up 10.8% in value and 4.4% in volume 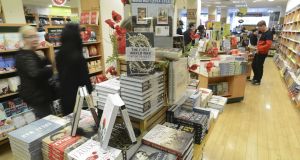 Nielsen’s annual book sales report for 2015 makes pleasant reading for booksellers and publishers, with the Irish market up 10.8 per cent in value and 4.4 per cent in volume year on year.

Adult fiction represented 24.8 per cent of the market by value in 2015 vs 24.6 per cent in 2014. The Girl on the Train outsold Grey: Fifty Shades of Grey as Told by Christian by more than 2 to 1 to take the top spot, at 60,476 copies vs 27,696, only a few hundred copies ahead of Anne Enright’s The Green Road. Perennial favourite Ross O’Carroll-Kelly came fifth, with Seedless in Seattle at 20,931.

Gill & Macmillan had a range of successes, most notably, Irelandopedia: A Compendium of Maps, Facts and Knowledge and Until Victory Always, A Memoir. Hachette had the biggest success with The Children of the Rising, while Penguin Ireland had the Ross O’Carroll-Kelly title, followed by Henry Shefflin’s The Autobiography and The Happy Pear: Healthy Easy Delicious Food to Change your Life.