The centenary of the American poet, admirer of WB Yeats and one-time Dublin resident, is marked by the publication of two books and a conference in the city 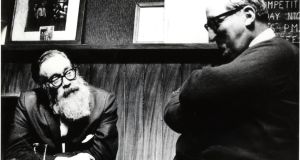 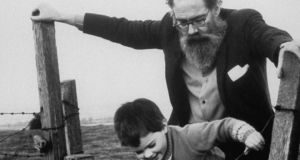 Born in Oklahoma in 1914, John Berryman was one of the most original American poets of his generation. In the decade before he took his own life, in 1972, he won several of the most prestigious prizes for poetry in the United States, including a Pulitzer Prize for 77 Dream Songs, in 1967, and both the National Book Award and the Bollingen Prize for His Toy, His Dream, His Rest, in 1969. He wrote many of the Dream Songs that make up the latter volume during an academic year he spent living in Dublin with his wife, Kate, and their daughter, Martha, between 1966 and 1967, a trip that was funded by a Guggenheim Fellowship.

Berryman first visited Ireland in April 1937 when, while studying at Clare College, Cambridge, he decided to come across to Dublin to meet WB Yeats. He didn’t meet Yeats on that occasion, but they did finally meet at the Athenaeum Club in London a few weeks later. In 1965 Berryman said that he “began work in verse-making as a burning, trivial disciple of the great Irish poet William Butler Yeats”. He repeated the claim in a BBC interview with Al Alvarez that was filmed at Ryans pub – aka Beggars Bush – in Ballsbridge over three days in 1967, and in Dream Song 312 (written on his first day in Ballsbridge) he wrote that he had “moved to Dublin to have it out with” the “majestic Shade” of his great precursor.

In a letter to Robert Lowell in 1962, Elizabeth Bishop said of Berryman that “one has the feeling a hundred years from now that he may be all the rage”. By the end of the 1960s, however, Berryman had become a major presence not just in American poetry but throughout the English-speaking world. In his centenary year Berryman’s publisher in the US has reissued his key works 77 Dream Songs, The Dream Songs and Berryman’s Sonnets, with introductions by prominent contemporary poets – Henri Cole, Michael Hoffman and April Bernard – reflecting both his popularity and the respect with which Berryman’s work is still regarded.

The extent to which it inspires and fascinates readers and writers in 2014 as much as it did during his lifetime is reflected in Berryman’s Fate: A Centenary Celebration in Verse, published this month by Arlen House. Berryman’s Fate gathers poems written in response to Berryman by 54 contemporary poets from Ireland, Britain, South Africa and the US, including Simon Barraclough, Ciaran Berry, Siobhan Campbell, Gerald Dawe, John F Deane, Isobel Dixon, Timothy Donnelly, Martin Dyar, Leontia Flynn, Paul Muldoon, Eiléan Ní Chuilleanáin, Nessa O’Mahony, Gerard Smyth, George Szirtes, David Wheatley and Macdara Woods.

Some of the poets included in the anthology knew Berryman and worked or studied with him in the 1950s and 1960s – poets such as John Matthias, John Montague and Richard Ryan – but Berryman’s Fate also shows that young poets today are as fascinated by him as earlier generations were, if not more than ever.

An accomplished scholar and critic himself, Berryman knew by the time of his death that younger writers and readers saw something new and exciting in his work. Throughout the 1970s and 1980s, however, his critical reputation suffered because of an insistence on reading him in narrow terms as a confessional poet, as if his work said nothing at all about the social and political world within which he worked.

This view is comprehensively challenged in John Berryman’s Public Vision: Relocating the Scene of Disorder, which is also published to coincide with the poet’s centenary year. Focusing on key poems such as Berryman’s elegy for John F Kennedy, Formal Elegy, and exploring his engagement with figures such as the communist poet Robert Bhain Campbell in the 1940s and the social-realist painter Ben Shahn in the 1950s, John Berryman’s Public Vision allows the poet to be seen in a radically new way that also challenges the confessional label that has stuck to him, and some of his contemporaries, for too long.

Berryman rejected such labels, and his work resists easy classification. “Who knows how many origins a deep work has?” he asked in his study of Stephen Crane, first published in 1950, and his work continues to invite and reward scholarly inquiry. On the 30th anniversary of his death, in 2002, a symposium was held in Trinity College Dublin that brought scholars together from Ireland, Britain, Hong Kong and the United States. This weekend, to mark Berryman’s centenary, scholars and poetry lovers from around the world will gather at the Irish Centre for Poetry Studies (at Mater Dei) and again at Trinity College to continue the work of understanding this great American poet’s achievement.

“After thirty Falls I rush back to the haunts of Yeats / & others” he wrote in Dream Song 281, reflecting his own desire to reconnect with his Irish master 30 years after he first visited Dublin. The John Berryman centenary conference that will be held this weekend in Dublin will bring together scholars from Ireland, Britain, Romania, Canada and the US to explore issues such as the poet’s influence on contemporary writing and his relationship with the earlier poets Delmore Schwartz and Randall Jarrell. The concluding session will be on music associated with Berryman, from Brian Boydell to Nick Cave.

Berryman’s poetry is often difficult, not just in formal terms but because in it he explores some of the darkest experiences of the modern self. But he is also a poet who asked to be remembered, simply, as an artist who worked hard. At all stages of his development, from The Dispossessed (1948) and Homage to Mistress Bradstreet (1953) to Love & Fame (1970) and the posthumously published works (which continue to appear), Berryman remains one of the most original, continuously inventive and compelling poets of his generation.

John Berryman’s Public Vision: Re-locating the Scene of Disorder is published by UCD Press. The poems with this piece are from Berryman’s Fate: Reception and Redress (Arlen House), a new anthology to mark his centenary. You can get more details about this weekend’s conference from berryman2014.tumblr.com/dublin