Books in the bath, dancing from Dusk till dawn and other Kilkenny attractions

The Taming of the Shrew is a ghastly play but, like much else at Kilkenny Arts Festival, it’s handled with wit and made wonderful 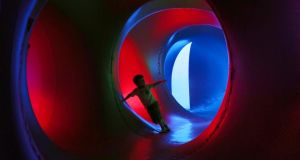 It began at St Canice’s Cathedral in August 1974. In those days the festival known as “Kilkenny Arts Week” was made up of mostly classical music, with an ancillary programme of poetry readings and visual arts. The festival has changed in the 40 years since. So has classical music. So, for that matter, has Kilkenny. What hasn’t changed is the variety and quality of the material on offer. Spend three days at Kilkenny Arts Festival in August 2013, and here’s what you can do and see.

Friday: Sex in the Cathedral

This year’s opening concert at St Canice’s was a solo gig by Neil “Divine Comedy” Hannon, whose cheeky rhymes and quirky love songs certainly wouldn’t have been on the musical menu 40 years ago. With just a guitar and a grand piano, Hannon charmed his capacity audience by offering snippets from a guidebook to the cathedral as he voyaged through his back catalogue, from Your Daddy’s Car from 1993’s Liberation, through old favourites Everybody Knows That I Love You, Generation Sex and That Theme from Father Ted all the way up to The Complete Banker, Assume the Perpendicular and At The Indie Disco from his 2010 album Bang Goes The Knighthood.

A tribute to the music of his youth, the latter offers the line: “Give us some Pixies and some Roses and some Valentines . . . ” Hmm. Maybe music hasn’t changed all that much. One way or another, everyone came out of St Canice’s on Friday night with big smiles on their faces.

Saturday: the girls in their summer clothes

It was a very different story on Saturday night, trudging home from Shakespeare’s Globe On Tour’s The Taming of the Shrew, performed outdoors to a crammed Castle Yard at Kilkenny Design. It’s a three-hour play; and despite the generally balmy temperatures of summer 2013, when you sit for three hours outdoors on an Irish August night, you get very, very cold.

My spirit was a different matter. The Taming of the Shrew is a ghastly play. You can either read it as profoundly misogynistic, or as so obviously farcical that it’s actually a feminist statement in reverse. (Great choice, Willie – thanks.) This touring production boasts an all-female cast; so you have women dressing up as men and striding about the stage being cruel to, and disparaging about, women.

Did that make a difference? Yes, it did. Did it make a point about gender stereotyping? Yes, it did. Were the female actors hugely accomplished, not just in the delivery of Shakespeare’s lines but in producing a range of musical accompaniments from raucous folksong to ballsy jazz? Yes, and twice yes.

There’s lots of “rude mechanicals” comedy in The Taming of the Shrew, and the Globe women played it to the hilt. (Hilt. Geddit?) Verbal gags, puns, sometimes a single raised eyebrow – the proximity of the stage to the tiered seating made facial gestures particularly effective – it was hilarious, and beautifully done.

I still found it seriously depressing. It wasn’t just that I had, long before that final speech from the “tamed” shrew about putting her hand under her husband’s foot, lost all feeling in my own feet. It was that it came at the end of a long day devoted, thanks to the variety of intellectual stimulation on offer at Kilkenny Arts Festival, to thinking counter-cultural thoughts.

The day began with a “Walk and Talk” with Bob and Roberta Smith - who is actually just one man, Patrick Brill. He brought a large and disparate group on a walking tour of his various art exhibits around the Marble City. An “art school” at the Heritage Council Community Rooms invites people to make their own art, with various prompts to help, including an onion installation inspired, the artist explained, by Father Ted. “Small onion: far away . . . ”

The bishop’s robing room at the back of St Canice’s has been transformed into an atelier for the Jewish feminist philosopher Hannah Arendt – who is there in person, along with her books. At Rothe House, a soapbox invites all comers to have their say about anything that ails them, and record it for posterity.

In his candy-pink shirt, green flowery jacket and pork-pie hat, Bob and Roberta is the living image of an artist. He’s irreverent and devoted to disorder, but gentle and good-humoured and easy to be around. Along the river, his series of flags pose open-ended questions. What is Good? What is the Troika? One child, he tells us, answered the latter question with “It’s a box that you put money in”.

To a child raised with the tradition of a Trocaire box, it’s an easy mistake to make. Or was it a mistake? “Actually, when you think about it,” says Smith, with a twinkle, “it’s pretty close to the mark.”

In the afternoon, the 2013 Hubert Butler lecture at St Canice’s was given by the humanist philosopher AC Grayling, who preached not his trademark atheism but the gospel of reading – which was fine by his obviously literate audience. He was reluctant to offer advice on specific books but when pressed by interviewer Olivia O’Leary, he suggested Jane Austen, Homer’s Odyssey, Don Quixote and Steinbeck’s The Winter of Discontent.

Grayling also – as a kind of jokey leitmotif – advocated reading in the bath. Does anyone seriously have time to read in the bath any more? Does anyone even have time to have baths any more? What does it all mean? Can you think open-ended counter-cultural thoughts if you can’t feel your feet? Is it any wonder I ended up staggering around Kilkenny on Saturday night, tired and emotional? At least I wasn’t arrested. Imagine trying to plead “too much imbibing of Shakespeare” to the guards around here. Although I suspect they’ve heard worse.

It’s not possible to be glum in Kilkenny for very long. The city is just too attractive for that; plus, the arts festival is so well integrated that you don’t have a sense of some parallel artsy universe. By lunchtime, the city centre was thronged with happy families, buggies, dogs and tourists. They wandered, shoeless, through the giant Architects of Air “luminarium” in the Castle gardens – think the Starship Enterprise crossed with the sci-fi movie Fantastic Voyage – and to enjoy the free clowning and acrobatic events on the Parade. They gazed, goggle-eyed, at the fantastic creations in the Abbey Theatre’s underwear exhibition (a birdseed bra: now there’s a thing you don’t see every day) or Una Burke’s gorgeous leather breastplates and Andreia Chaves’s gold shoes at the National Craft Gallery.

Imbibing a well-earned cup of coffee at Chez Pierre after all that, I overheard two young lads chatting to the French owner as they settled their bill. They were, they said, musicians. “Classique?” asked Pierre. “Baroque,” came the answer. They turned out to be Thomas Dunford and Philippe Grisvard, theorbo player/lutenist and harpsichordist/organist respectively from Ensemble Marsyas, who proceeded to play a spectacularly beguiling selection of music by Handel, his lesser-known compatriot Thomas Fasch, and the English lutenist John Dowland at the Black Abbey.

To round off the day, and the weekend, it seemed appropriate to head to the specially-commissioned contemporary dance piece Dusk Ahead by Junk Ensemble, which will also be performed at Dublin Theatre Festival. A spectacular set – long reams of golden thread strung at angles across the stage – created a woozy nether-world where the dancers explored themes of blindness, invisibility, trust and betrayal. They also played live music, and sang the words of Samuel Beckett: “Any fool can turn a blind eye but who knows what the ostrich sees in the sand”.

The effect was mesmerising though, as so often with contemporary dance, difficult to translate into words. “The murky fading light of dusk, when it is difficult to discern what is real and what is imagined,” is how the programme put it. Not, come to think of it, unlike how you feel after a weekend at Kilkenny Arts Festival.

Ryan Adams: Singer is no stranger to controversy or to Ireland
10