Bare necessities: Back to nature at the BARE in the Woods festival

Do we like hanging out at this one-day fest in Portarlington? Is the Pope catholic? 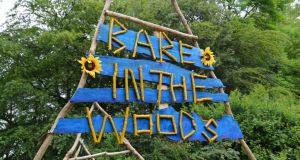 Join me in the pines

Mum’s the word: Philomena Lee and her daughter Jane at the Festival of Writing and Ideas 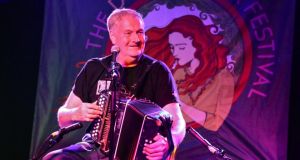 The world accordion to Seamus Begley at Doolin Folk Festival

When peak festival season rolls around, the session intensity winds up, but voyaging between partying ports becomes more languid (with the added bonus of being able to replace the babywipe-bath with a swim in calm waters). The sun picks out incandescent pin-pricks of colour from the dark throb of lush, dark-green fields; dots of electric yellow from swaying irises, swathes of crimson poppies flapping in a gentle breeze, all surrounded by tiny volleys of bursting white blooms from borders of hawthorn and elderflower (planting subliminal desires for fragrant and frosted homemade brews). The landlubber’s life takes on the seduction of a siren and pulling up anchor to set sail for the shores of distant sessions becomes more difficult than the voyage itself, especially when you’re docked in the harbour of a hopping happening.

BARE in the Woods festival almost didn’t show up on my navigational chart. It’s a small, one-day BYOB festival on the outskirts of Portarlington that had originally set out to cater for around 800 people, but looked set to double that number as I eased Wanderly Wagon into a berth in a bustling field. The line-up was impressive, with New Secret Weapon, Sounds of System Breakdown and Natty Wailer featuring among 30 acts on the bill, but it was the set-up of this shindig that made it stand out. The effort, ingenuity and creative spark that went into the installations and stages on the site are worthy of any festival anywhere in the world.

The Crannóg stage was like a function room from Middle-Earth, complete with a border of soft furnishings and its own moat. The crowd this gig attracted were perfectly at home in the pine-fresh setting, and I recognised more than a few of them; this was going to be a do of distinction. The dreadlock- to-freerange-dog coefficient also suggested some rollicking results. I was gutted to leave early, but I’m told there will be another chance to go down to the woods in September, and with the infrastructure and effort that the crew have put in here, it’ll definitely get more attention next year. Keep sketch!

CLIFF LANGERS The night before, Seamus Begley had been his usual rakish and ebullient self at Doolin Folk Festival. Upon receiving a slip of paper from the crowd, he announced: “Hang on lads. I have a request here for Pierre and Amber from Boston, who got married on the Cliffs of Moher today.” Pierre and Amber appeared at the front of the stage, both beaming at each other, and both resplendent in silky white wedding finery, awaiting well-wishes and a waltz. “Ye fecking eejits! Ye would’ve been better off jumping off the cliffs than getting married. I have a right tune for ye,” said Begley as he launched into The Cuckoo Waltz.

After leaving BARE in the Woods I was more than a little disgruntled. I argued with myself in the van all the way to the Festival of Writing and Ideas at Borris House. I wasn’t expecting half the sceadh as there was at the forest fleadh, but the atmosphere in the room where Philomena Lee spoke was as charged as any festival field I’ve experienced. The respect and depth of emotion was palpable, and when the talk finished, the crowd spontaneously rose to their feet to show their appreciation for what Philomena’s story has done for them, and for Irish society in general. She had been good-humoured and smiling throughout, but it was this gesture of appreciation from the audience that moved Philomena to tears. It was a privilege to be in the room.

This weekend there will be solstice events all over the country, but Body&Soul has my undivided attention. Wanderly Wagon’s anchor was dropped in Ballinlough yesterday morning, all the sails have been stowed and we may not feel the roll of the road ’til Tuesday. Bring it!