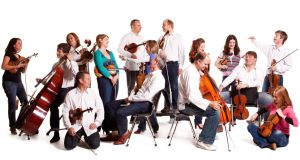 Arts Council grants: the Irish Chamber Orchestra is one of the cultural groups to receive extra funding in 2021

The Arts Council is to invest €46 million this year in 105 key arts organisations across Ireland, it has announced, including the Abbey Theatre, in Dublin, the Irish Chamber Orchestra, in Limerick, Macnas, in Galway, Cork Midsummer Festival, Spraoi, in Waterford, and Teac Damsa, in Kerry. The council unveiled its key strategic-funding scheme, for the biggest arts organisations, from its largest ever exchequer grant, of €130 million.

The government agency for funding and developing the arts has generally awarded about 20 per cent more across art forms, with each organisation getting at least what it received last year and some getting significantly more, according to the council’s director, Maureen Kennelly.

A further €7.8 million will fund 43 arts centres around Ireland, from An Grianán, in Co Donegal, and Garage Theatre, in Monaghan, to Dunamaise Arts Centre, in Laois, Glór, in Ennis, and West Cork Arts Centre, in Skibbereen.

More grants will be announced shortly, Kennelly said, including for touring – which the council hopes will resume later in 2021 – and a large increase in bursaries for individual artists.

In the strategic-funding decisions announced this week, the Abbey Theatre remains the largest single recipient of State investment, at €7,500,000 for 2021. The funding decisions will be published online next week.

Kennelly said the council is “still hoping that from summer on there will be some resumption of in-person activity” but that it is dependent on the Covid-19 vaccination programme. “Festivals are gearing up for mid- to late summer onwards, and for a while it’s going to be a hybrid” of live and online performance.

The Arts Council chairman, Kevin Rafter, said the council’s bigger budget is part of a Government commitment to increase arts funding. He expects that beyond 2021 the organisation “will be in position to have a budget that will be €130 million-plus”. The funding increase takes into account that “the sector will still be living with Covid. We’ll still have physical distancing and limitations on indoor activities.”

Kennelly said the Arts Council last year funded 632 artists and 216 arts organisations whose work it had not previously supported, under a “light-touch, very flexible” Covid-19 scheme.

Applications for funding rose by 95 per cent, which “shows the capacities” for creativity “that are out there. And funding will help to realise the ambition. We’re confident of coming through the pandemic in a far healthier state.”

Separately, the Department of Tourism, Culture, Arts, Gaeltacht, Sport and Media’s new €50 million support scheme for commercial live events in 2021, announced in the budget in October 2020, has not yet called for applications. Some companies are waiting for details of how to apply for funding to allow them to plan live entertainment, including rock concerts, unsubsidised theatre, and stand-up comedy, for later in the year.

The department said this week that “officials have gained valuable insights” from pilot grant schemes under the July 2020 stimulus and would “apply these learnings when allocating funding this year. Other measures are also under consideration, including those which have emerged from engagement with the sector and with stakeholders. This engagement is ongoing, and it is hoped that further details and decisions will be announced shortly. A call for applications will issue following these decisions.”

At a meeting with members of the National Campaign for the Arts this week, to discuss progress in implementing the Arts and Culture Recovery Taskforce report, published in November 2020, Minister for Culture Catherine Martin is understood to have indicated that a roadmap for arts and culture would not be looked at until after April 5th and the successful reopening of schools.

This article was amended on February 26th, 2021, to correct the amount being given to Galway Community Circus