To Olivia: Portrait of a famous family in distress 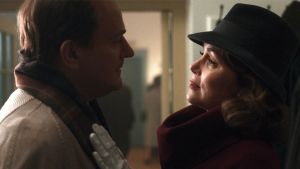 There’s a fair bit of baggage hanging around this treatment of Roald Dahl and Patricia Neal’s emotional recovery after the death of their daughter in 1962. A later stage of the marriage has already been examined, with Dirk Bogarde and Glenda Jackson at the dashboard, in the famous 1981 TV movie The Patricia Neal Story. Following revelations about anti-Semitism, Dahl, never celebrated as the warmest of men, is now a somewhat “problematic” figure. But John Hay’s film just about gets by on committed performances and dusty rural ambience.

Hay and David Logan’s screenplay, adapted from Stephen Michael Shearer’s book, does not go easy on the author. Following young Olivia’s passing from measles, Dahl refuses to speak her name and barks at his wife when she tries to comfort him. But the very act of casting Hugh Bonneville in the role sweetens and softens the persona on screen. We can’t quite believe that nice Lord Whatshisname from Downton really believes his more poisonous pronouncements. Maybe that’s a bad thing. Maybe we shouldn’t be cosying up to the old rogue.

Keeley Hawes’ variations on Patricia Neal, a great American actor, gives us a less conflicted character. Though kicked senseless by unexpected bereavement, she is, nonetheless, better able to confront the challenges of living with grief. When the offer comes to appear in Martin Ritt’s Hud – for which she would ultimately receive an Oscar – Neal tentatively grasps the opportunity while Dahl, happy enough to start work on Charlie and the Chocolate Factory, seems to regard her acquiescence as a kind of betrayal.

There is some clunky storytelling here. We regret to inform you that the author’s creative process is conveyed via conversations with imaginary children and – CLANG! – reminders of Dahlery in everyday life. Young Sophie, who has a doll called Matilda, longs for an everlasting gobstopper. And so on.

The scenes in Hollywood don’t convince. Poor Sam Heughan, though better-looking than you’ll ever be, is still not good-looking enough to convince as Paul Newman.

Still, the film does a good job of dragging us from the darkest valleys of tragedy towards the gently sunlit uplands. It does more. Reminding us that measles once killed, the film makes an implicit argument for vaccination at a time when cranks are increasingly spreading harebrained disinformation.

This Sky Cinema release also provides a delightful final role for the untouchable Geoffrey Palmer. Superhumanly pompous as Geoffrey Fisher, the Archbishop of Canterbury who officiated at the coronation of Queen Elizabeth II, he gets to inform the grieving parents that Olivia will not meet her pets in heaven. “Animals have their own afterlife,” he intones.

The parents’ disdainful laughter sets them on the road to recovery. Nice work, Geoff.

On Sky Cinema from February 19th