Why Dublin’s breath of fresh air seems a little stale 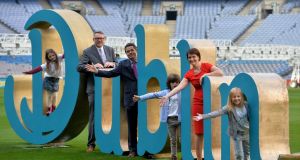 London is almost a sister city to Dublin. Heaving with long-departed and more recent emigrants, it’s the place you go to when you think (usually incorrectly) that you’d be a better, more successful person if you were in a bigger, harder city with taller buildings.

I recently took a gamble, and headed to London. As a graduate during Ireland’s dark period, where young people were being spat out of the country at the speed of Roger Federer’s serves, I had been one of the few that stayed. The resulting regret and jealousy was enough to make me leave an interesting and fulfilling job (at Le Cool Dublin, the weekly cultural agenda), pack my bags, and get the boat.

Standing at Euston station last week, I spotted something I had seen online, except this time it was so large it’d dwarf the tallest man in Britain: “Dublin. A breath of fresh air.” It certainly didn’t have me ditching the Victoria line train to Highgate in favour of the 8:40pm sail and rail to Dublin Port.

The first thing that hit me when I saw the new identity for Dublin was nostalgia. For childhood summers spent eating Icebergers and sandy ham sambos and the signwriting that adorn our streets in small villages and larger cities. Why go bald? After nostalgia and homesickness, I felt quite angry towards the “Somebody open the window. Dublin, a breath of fresh air” quip on the Victoria Line train I then fought my way on to. And even angrier towards “Like the feeling of emerging from underground? You’ll love Dublin” I encountered on the journey after that.

Flippant and expensive. You poor Londoners, open the window! Ha ha, do you like emerging from the stuffy underground? Then come to Dublin for some fresh air, because you can’t go horse-riding in Richmond Park or jump into the Serpentine on a sweltering day – but, you can. It is the reverse of snobbery that Irish people here face every time they recommend a restaurant in Dublin to a British person. “Is it really good, or do you just mean good for Ireland?”

The smarmy posters are expensive because they claim to advertise Dublin, but don’t showcase any of the reasons to go there. Not the people who diligently read through Ulysses at Sweney’s Pharmacy daily, the maximalist collectors who give tourists due reason to swoop on Newmarket on the last Sunday of every month for the Dublin Flea, or the creativity that pulsates within the city, enabled by communities such as Damn Fine Print, Totally Dublin, or my own alma mater. There’s no relatable imagery, no beautiful infographic, nothing that persuades you to seek out visitdublin.com.

I was afraid that I was judging the campaign harshly because of my own professional background, so I showed the ads to British pals who constitute the target audience of “social energisers” – this tourism jargon-speak means 25-35-year-old professionals, who are into craft beer and local experiences. On a physical level, they agreed it was nice – the lettering and style – but didn’t really know what it was trying to say. One friend looked particularly blank: “I get it, but I don’t get it.” It certainly didn’t feel like a hook that’d make them consider Dublin as a destination.

The absence of a personal or informational angle is confusing. It’s authenticity that gives Dublin an easy charm, and also authenticity that research has shown that consumers in the digital age are responding to. They respond to faces, stories, information, and fact. Blairite spin is out, and they can smell it a mile away.

The accompanying video feels like every video prefixed with “Visit”. Time-lapse of the Spire, tick. Strobing cars, tick. Someone jumping into the Forty Foot, tick. A little bit of brand placement too: Viking tours, Wave Dock, Guinness. It sticks to the formula. It offers nothing constructive to the viewer. It feels like a Tiger hangover, at odds with a place that is still recovering from a difficult period.

It’s all neatly tied up into storyboarded moments, while those on the ground know Dublin’s success in attracting an urbane audience has been indebted to the tenacity of individuals and associations who refused to let economic scarcity prevent them from improving and revitalising the city, whether that was Offset’s first conference in Liberty Hall or Joe Macken setting off a pop-up revolution with a fried-chicken shop.

Why not celebrate people instead of trademarks? People are where the campaigns for Stockholm, Amsterdam and Berlin have differentiated themselves, and they are allegedly the successes that Dublin wants to emulate. I understand that Visit Dublin wants to put emphasis on the mountains-to-sea aspect of the city, which is tremendous, but the video doesn’t effectively serve it up. It doesn’t make you think about Dublin’s possibilities as an urban centre framed by nature; it just feels like an assault on key growth targets. It ticks them off the list without weaving a narrative or a personality for the city.

To me this feels like an attempt to scratch Dublin’s party history away by ignoring the city altogether. I’m not in charge, but I’m here in London telling people that Dublin snap, crackles and pops like a fresh bowl of Rice Krispies. About the exhilaration of escaping from a seagull on Francis Street with your chips intact, cycling to the coast on a rare hot day, and joining the translucent plasterboard public in eking and eeking their way into the sea. About the beauty of St Patrick’s Cathedral as it glows in the dark, spoken-word nights that feel more like gigs, chili cook-offs in aid of charity and the community feels, and bargain Ferrero Rocher on Meath Street. There are the days when Dublin knocks you off your bike and you hate it, but some days when you loll on the Powerscourt Steps with a coffee, you could swear it loves you back.

I know what I’d tell you, but what’s the official line? Somebody open a window.

Dublin, a breath of fresh air.