Why are so many current art exhibitions fascinated by the occult? 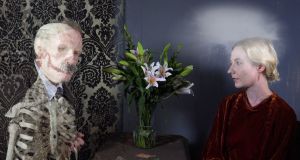 Tony Oursler’s Imponderable explores the occult in a sprawling show at MoMA that takes in Arthur Conan Doyle, Harry Houdini and a cast of mediums, ghosts and spirits

On a recent trip to Munich I was transported by the collection of works by the Blue Rider group at the Lenbachhaus. The artists, which included Wassily Kandinsky, Franz Marc, Gabriele Münter and Paul Klee, made the jump from representation to abstraction, and I could have sat for hours coming to see, through their paintings, something deeper than myself. Klee’s aim was, as the information sign put it, “making visible the mysterious realm between the appearance of things and their essence with emblematic signs”.

Since mark-making first began, this has been both inspiration and goal for many artists and yet, in an art world shaped by a certain breed of influential curators and wealthy collectors, this strand of making has been seen as, perhaps, lesser than shiny marketable art, cleverly political work, or self-referential pieces that speak to a group of insiders. But recently, a spate of shows points to a renewed interest in a vein of art that never actually went away.

At MoMA in New York, Tony Oursler’s Imponderable explores the occult in a sprawling show that takes in Arthur Conan Doyle, Harry Houdini and a cast of mediums, ghosts and spirits (it ends on April 16th). Susan MacWilliam’s Modern Experiments (just concluded at Highlanes) delved into paranormal phenomena. Jesse Jones’ Tremble Tremble, opening at the Venice Biennale in May, uses imagery from the tarot as a key set of emblems; while Imma has just opened its major exhibition As Above, So Below (which runs until August 27th).

Look at the parallel histories of art and politics, and you start to see interesting connections

Subtitled Portals, Visions, Spirits & Mystics, Imma’s exhibition features a cast of artists including Kandinsky, Hilma af Klint, Bruce Nauman, Sigmar Polke, Patrick Pye and Susan Hiller. So what’s going on? Co-curator Rachael Thomas denies the exhibition has anything to do with a current zeitgeist, instead saying that the idea grew out of the Imma exhibition What We Call Love (September 2015 / February 2016), and is thoroughly grounded in academic research.

It is a well-researched exhibition, though her fellow curator Sam Thorne takes a different view. “It’s definitely in the zeitgeist,” he says. “It’s coming, first of all, from a frustration with some of the standard narratives of modern art history: this idea that a bunch of guys about a hundred years ago got together and invented abstract painting.” All that may be true, but there’s something else going on: and that’s anxiety. Look at the parallel histories of art and politics, and you start to see interesting connections.

A forerunner of the current interest, in art terms, was undoubtedly the 2013 Venice Biennale, where the main curated exhibition, The Encyclopaedia of Everything, included works by Hilma af Klint, tarot cards from Aleister Crowley, and a whole slew of art that tapped into occult and spiritual themes. But the connections between anxiety and the spiritual and occult aren’t just in art.

When the events themselves seem senseless, we have to reach further in our thinking

The Cottingley Fairies case appeared in 1917, during the thick of the first World War. Although Elsie Wright and Frances Griffiths later admitted they had faked their photographs “proving” that fairies existed, Sherlock Holmes author Arthur Conan Doyle had been a vocal champion of the girls’ claims. Doyle, most famous for his most rational of detectives, had long been fascinated by seances and spiritualism, but it was his experience of the carnage of the war that led him to see spiritualism as a solace from God. It’s easy to understand how someone might go from losing a loved one to imagining, or believing, that they are still in communion with them; but anxiety is reaching for the paranormal in other ways.

A US National Security Agency (NSA) memo from 1977, at the height of the Cold War, details CIA reports on Soviet parapsychology experiments. A separate NSA memo theorises telekinetic weapons, noting “Grief is particularly associated with such phenomena,” and suggesting that kidnap and trauma could be used to heighten a subject’s telekinetic abilities. (Michael Best has written about this in detail on atlasobscura.com.) Declassified documents also show that spoon-bender Uri Geller worked with the CIA in the 1970s, as part of the “Stargate” programme.

Fast forward to our present age of anxiety and it therefore comes as no surprise to discover a resurgence in interest in the mysterious beyond. It’s one of our natural survival skills: to seek narrative sense in events. When the events themselves seem senseless, we have to reach further in our thinking. As Sam Thorne says, “there is an answer rooted in our current predicament. It’s a moment when optimistic and exciting new ideas about other worlds and, dare I say it, utopias, [meet] a resurgent right-wing nationalism that is closing down those ideas.”

As the pedigree of the artists in As Above demonstrates, the ideas themselves are nothing new. Pádraic E Moore, who acted as curatorial advisor to the exhibition, explored the beliefs of the Theosophical Society at the Hugh Lane in 2014, and you could argue that the greater part of John Hutchinson’s programme of exhibitions at the Douglas Hyde Gallery in Trinity College Dublin, during his tenure between 1991 and 2016, was dedicated to opening doors of perception to the “other”.

As with Twombly, Kandinsky and Klee, the best art does transport us, but it’s not about escapism. Instead, as Thorne says, “Art removes us from our world, only to put us back into it, but closer.” Right now the current institutional interest in the irrational is a very fascinating mirror of our times.