Why it might finally be time to shout Great Scott 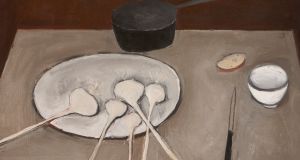 Detail from Still Life with Garlic (1947). Photographs: The Estate of William Scott 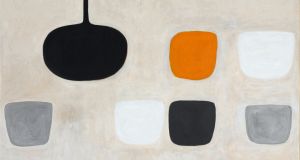 Detail from Still Life with Orange Note. Photographs: The Estate of William Scott

I f ever an artist’s reputation was in urgent need of rescuing, it is William Scott’s, writes Sarah Whitfield in her recent study of the painter. He was one of a “lost generation” of British artists whose work developed within the mainstream, essentially European modernism. For a time they flourished critically and commercially but they were “overwhelmed” by the advent of Pop and other movements in the 1960s, and by the subsequent fragmentation and diversification of artistic practice, which undermined the whole idea of a single, dominant tradition or form.

This year is the centenary of Scott’s birth, and to mark the event Tate St Ives, in Cornwall, has organised a touring retrospective exhibition that offers a significant opportunity to reassess his life’s work. The first venue is Tate St Ives, after which the show, gaining additional works along the way, will travel to the Hepworth Gallery, in Wakefield, in West Yorkshire, and then, in October, to the Ulster Museum, in Belfast, where Scott studied art. There are also related exhibitions in Enniskillen, Bath and Hastings.

Scott’s links with Northern Ireland are strong. The eldest of seven children, he was born in Greenock, on the Clyde in Scotland, and spent his first 10 years in a grim tenement there with his parents and siblings. His mother, Agnes, was Scottish; his father, also William, was from Enniskillen and harboured dreams of returning there. He did so, unannounced, one day in 1924, presenting his family with a fait accompli and instructing them to join him.

Scott snr was a house- and signpainter, and he taught his son the skills of the trade and, impressed by the boy’s drawing ability, encouraged him to think of being an artist. He was fortunate in enlisting the support of Kathleen Bridle, an enlightened young art teacher who had recently arrived in the town. She had studied at the Royal College of Art, in London, along with the sculptor Henry Moore, a friend of hers. As a teacher in the technical school and local schools, she enrolled young Scott in free art classes and noted his capacity for hard work and hunger for knowledge of art history.

Tragedy struck, however, when fire engulfed a building next to his father’s signpainting premises. It was thought, mistakenly, that someone was trapped inside, and Scott snr volunteered to carry a hose up a ladder. The ladder gave way, and he fell to his death. It was a disaster for the family, not least financially.


Scholarship fund
Bridle enlisted the help of the local art inspector to organise a community scholarship fund so that Scott could go to Belfast School of Art. The regime there was extremely conservative, and he found that he knew more than the teachers about recent developments in art, thanks to Bridle’s library. In fact, his introduction to art history was via the work of Cézanne, Picasso and Modigliani, among others, all of whom were unmentionable in the Belfast school.

His instinct was sound. After three years in Belfast, he and a fellow student applied to the Royal Academy Schools in London, encouraged by the promise of free tuition. Pragmatically, he applied to the sculpture department because he thought it would be easier to get into, and spent his first two and a half years as a sculpture student, shrouded by clay and plaster, until he switched to painting. Again, he was ahead of the institution in his artistic reach. At the same time, he was suspicious of such prevailing trends as surrealism and postcubist abstraction.

He went to stay in Cornwall for about six months, and it became the first of many regular visits. He never settled there or became one of the St Ives artists, such as Patrick Heron and Tony O’Malley, but it was important in shaping his feeling for what he called “primitive realism”, and he realised that he was not, at heart, a landscape painter. He married a fellow student, Hilda Mary Lucas, and together they travelled to Italy and then to Pont-Aven, in Brittany.

His work from the period suggests that he was trying to find his artistic voice, but that process was interrupted by the outbreak of war. His lack of Irish prevented him getting a teaching job in Dublin. The couple settled close to Bath, and he taught part-time at Bath School of Art, but in 1942 he enlisted. He hoped he might be a war artist, but it’s unlikely that his work would have appealed to the authorities for that purpose, and he served out the remainder of the war years in the ordnance corps. He managed to paint watercolours while involved in mapmaking, but he felt artistically isolated and dispirited.

In the postwar years he applied himself with renewed vigour to painting and teaching. As a visiting lecturer at Banff School of Fine Arts, in Canada, in 1953 he paid a quick visit to New York. There he got a taste of the new American painting and met several of the painters, including Willem de Kooning, Mark Rothko and Jackson Pollock. He also made valuable gallery connections. Impressed by the verve and scale of the work, he nonetheless realised epic abstraction was not for him, although he could identify most closely with Rothko. New York mostly reinforced his identification with a distinctive lineage of European, indeed French, painters. “There’s a whole tradition, the descent from Chardin through Cézanne to Braque and Bonnard, which has no part in their painting, and that’s the tradition that I’ve always held to,” he wrote in 1975. The painters he named share a liking for domesticity as a source of subject matter and feeling.


Pure abstraction
Before his trip to the US, he was tending increasingly towards pure abstraction. But afterwards he went back to his earlier kitchen still lifes, increasingly stylised arrangements of simple pots, pans and utensils. Within a few years he had made of these elements a surprisingly rich pictorial language, with a curious combination of austerity and sensuality, close to abstraction but always anchored to reality, a language he employed successfully for several decades. Very stark, flat forms were embodied in lush, often near-monochrome blankets of pigment. He used particular colours and colour schemes recurrently: creamy whites over ochre grounds, intense oranges, vibrant blues, sombre dark earths, and pure black and white.

Scott’s reputation soared in the 1950s. As the curator James Johnson Sweeney, then at the Guggenheim, reportedly put it: “At last England has a painter!” Yet by the time of his Tate retrospective in 1972, the tide had long turned. It was as if the art establishment simply did not know how to fit Scott and several of his contemporaries into the prevailing narrative of recent British art history.

In his later years he suffered from dementia, and he died in 1989.

Will this year’s exhibitions, culminating in the largest at the Ulster Museum, rescue Scott’s reputation? Yes and no. In one sense it doesn’t need rescuing. There’s solidity to his achievement, a classical gravity to a substantial proportion of his oeuvre that comes through clearly and will surely endure. Besides which, his role in alternative historical narratives, that is to say in Irish, Scottish and European contexts, is likely to prove significant in the long term, rather than restoring him to prominence in a London-centric pantheon. That’s apparent in the roadmap of the retrospective, which does not include London.

Scott was prolific, and there are still aspects of his output, particularly later on, that are relatively unknown. Sarah Whitfield is editing a four-volume catalogue raisonne of his oil paintings, which number about 1,000, to be published in May, in a limited edition, by Thames & Hudson.

The Enniskillen exhibition, Full Circle , highlights the museum’s small but qualitatively impressive collection of Scotts. More, it features the results of school workshops in which pupils responded to Scott’s paintings and graphic work. It’s very striking that they had no problem relating to his pictorial approach, and there’s a fantastic freshness and boldness to their work. That augurs well for his future standing.


William Scott is at Tate St Ives until May 6th; the Hepworth, Wakefield, from May 25th to September 29th; and the Ulster Museum, Belfast, from October 25th to February 2nd, 2014