Lynch’s Venice Biennale exhibition, now on tour, is quite an achievement 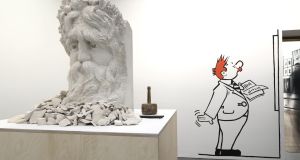 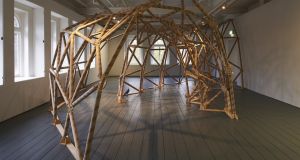 There is an air of square-cut solidity to Sean Lynch, appropriate for an artist- curator who has carved out his own considerable position in the cultural landscape.

Lynch’s practice centres on a meticulously researched, archaeological approach to aspects of mostly recent cultural history. That practice embraces writing, visual and textual documentary material, original objects and the reconstruction of lost objects. It often involves an edge of institutional critique, encouraging us to question cultural and aesthetic assumptions.

You can see how such a methodology extends naturally into curatorial territory. That is to say, one cannot see Lynch standing meekly aside in deference to any other curatorial authority.

He was a good choice as Ireland’s representative at the 2015 Venice Biennale, where his six-month show notched up more than 400,000 visitors. His Venetian project, Adventure: Capital, has begun its Irish tour at the Limerick City Gallery. (Lynch originally studied sculpture and art history in Limerick before going on to the prestigious Städelschule in Frankfurt.)

What’s on view in Limerick has broadened into a selective but substantial survey show of Lynch’s work back to 2007. In fact, Adventure: Capital is itself a kind of survey, drawing together what would ordinarily be several separate projects.

Lynch gravitates towards historical oddities and anomalies. Here the central, 17-minute title video sets out to link different narrative strands in the manner of a seanchaí relating a meandering tale. The video involves references to curing stones in Neolithic communities, the fate of a discarded public sculpture by the late John Burke, monuments and the lack of them at John Lennon and George Best airports, Greek river gods, the financial district of London and much more.

Ambitiously, the work’s abiding metaphor of flow and stasis encompasses the birth of both rivers and stone; the development of societies and cities; and the attainment and eclipse of manual skills as the free circulation of capital overwhelms the value of human labour and egalitarian aspirations. That, at least, is one plausible line of interpretation. If anything there is too much to interpret. The video, although never less than gripping, jumps restlessly from topic to topic and strains to contain them all in one package.

It could be that Lynch, an unrivalled master of specifics, is less comfortable with generalities. But Adventure: Capital is quite an achievement, and it is rewarding to see it in the context of some of his other projects.

Just Left of Copernicus (A Prologue)

Niamh McCann’s Just Left of Copernicus is an ambitious co-operative production by three institutions (Solstice in Navan, the Limerick City Art Gallery and Visual in Carlow). Rather than a simple touring exhibition, it is to some extent a malleable project remade for each venue. Its current iteration, in Limerick, sees it halfway through its tour. Each show has a different subtitle. This one, A Prologue, documents much of its genesis.

Each version reconstructs a central installation, Copernicus for Now, an environment on an architectural scale. This construction derives from an earlier work by McCann, based on a schematic, geometric representation of a section of the lunar landscape visible behind Neil Armstrong in an iconic photograph of the first moon landing.

Copernicus’s controversial heliocentric theory of the heavens, published in 1543 (coinciding with his death), was key to overthrowing the dominant geocentric vision of the universe, initiating a process that, nearly 4½ centuries later, enabled a human being to set foot on the moon. A prominent crater is named after Copernicus.

When you see Copernicus for Now, another point of reference looms larger: the polymath Buckminster Fuller. McCann mentions Fuller’s conception of Spaceship Earth, which visualises humans as the crew in charge of a craft hurtling through space. More specifically, the modular structure, devised by Limerick architects Jack Byrne and Séamus Bairéad and fabricated in FabLab Limerick with the use of a computer-controlled router, brings to mind one of Fuller’s geodesic domes.

Fuller didn’t actually invent the geodesic dome but, from about 1950, he popularised them to an extraordinary degree. Something about their geometric, modular form and futuristic appearance fired the public imagination with a spirit of utopian optimism (although they have built-in practical drawbacks).

Byrne and Bairéad’s versatile latticework construction is bolted together from cardboard tubing linked by uniform plywood joints. This walk-through environment is a fun piece of work, with a lightness and sense of playful possibility to it.

Its planning and making is carefully detailed in a fascinating and inspirational part of the exhibition. A number of much smaller ancillary pieces by McCann in two and three dimensions refer to commercial aviation and other subjects. One, for example, features airliners in a crater, presumably a lunar crater.

McCann sees the tubular framework as forming a usable space, a setting for interactive and theatrical events. Here, as elsewhere in her work, she seems to be interested in setting up an imaginative space of possibility, a fruitfully indeterminate realm that brings together elements of the historical record together with myths, dreams, fantasies and other sorts of fictional constructs and utopian ideas.

The underlying implication is that what goes on in the world is always coloured by these many factors, and not simply rational processes based on ends and means.