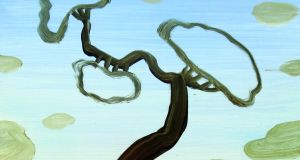 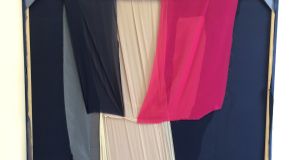 The apparent abstraction of Kate Cunningham’s elegant coloured compositions is subtly expanded by her choice of fabrics and by shapes, folds and other elements 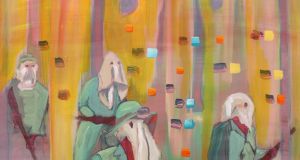 The fine arts degree and MFA shows at NCAD are always worth seeing, and this year you get two rolled into one. That’s because the conclusion of the final four-year degree course coincides with the conclusion of the first three-year degree course. Make no mistake: this means the exhibition is a marathon, necessitating more than one break along the way, and it could quickly become tedious – if it wasn’t so good. It’s seriously good. Of course there are hiccups and misfires along the way, but overall, the levels of sheer hard work, conceptual rigour and technical ability are very impressive.

A few highlights: completing an MFA scholarship, Jane Rainey’s series of paintings, A Solo Voyage to Vast Horizons, takes the idea of landscape as a starting point for some dazzling pictorial inventions. Bold Writing, Berni Masterson’s collaborative video and publication with poet Máighréad Medbh, takes as its starting point a writing primer in widespread use in 1916 (they came upon a copy in Mountjoy in the 1990s), and is a critique of the colonial process by which a subject population is conditioned to servile freedom.

Daragh Dempsey’s small, meticulously made, intricate paintings and works on paper, and a miniature theatrical setting, create “implied narratives” with a strongly cinematic feeling. Perhaps better known as a jazz singer, Ria Czerniak-Lebov graduates as an exceptional printmaker, with a lyrical series of works inspired by five months spent in Italy. Her richly tonal compositions bind together fragmentary and dreamlike memories with great skill. Susanne Wawra’s memories of travels in Europe and beyond take a more exuberant, enveloping approach in paintings dense and dizzy with sheer sensations.

Austin Hearne makes a great architectural installation, transforming the exhibition space with printed marble patterning in a work critical of aspects of the church’s record in Ireland. Seán O’Riordan’s fine installation is an exploration of how we read the architectural languages of “public, commercial and institutional space”.

Dániel Prokisch plays with the uneasy fault line between CGI and reality in an art world context, and shows “unboxing videos” for a set of invented action figures. The apparent abstraction of Kate Cunningham’s elegant coloured compositions is subtly expanded by her choice of fabrics including chiffon, silk and cotton, and by shapes, folds and other elements which quietly allude to bodily presence.

In a related way, Barbara Healy’s calico paintings evoke the body and the territory – the latter being Icelandic topography. For Christina Roche, the paint surface becomes a fabric, or a skin, to be peeled off and suspended, folded or bundled.

Unfairly perhaps, the sheer scale of the NCAD’s show tends to eclipse recent shows by its near neighbours, Creative Arts at DIT Grangegorman and IADT.

Creative Arts looked distinctly more settled in its new home this year and DIT photography graduates were as strong as ever in the Gallery of Photography. IADT reliably excels in visual communications and film, and it is clear that the art part of the faculty of film, art and creative technologies is essential to the entire enterprise, not an optional extra.

Wind back the clock a decade or so and it seemed that in art schools, painting, print and sculpture in the traditional sense were fading away as students migrated to lens-based technologies and concept-driven installations. Now the picture is not so clear-cut. It is no longer a question of either/or. Yes there’s lots of video, film and conceptualism on offer in all the degree shows. Installations remain a dominant element.

Things have broadened and evened out though. As Dr Annie Doona, head of IADT, observed of her own graduates, there is an evident urge to make things: students are getting back to painting and sculpture and the impetus is coming from the students, not the institutions. Her suspicion is that generations of students who have grown up in the digital age aren’t that impressed by it all any more – they literally live in it as fish live in water – and are looking beyond.

Humans are fundamentally creative and you can certainly be creative with the most advanced technology in the world, but there is a particular satisfaction in dealing not, say, with electronics via mouse and keyboard but working physically, fashioning something with basic materials in ways that demand the co-ordination of mind, eye and hand.

Equally, to engage with things that people have made in this way is different from the screen-based experience of so much modern life. Not surprisingly, this is evident in a lot of graduate work, from Aimee O’Mahony’s Digital Intimacy to a general expression of anxiety about fragile identities in contemporary life.

Emma Doran creates images and an environment of unease, for example, and Orla Langton a jittery, nerve-shredding, stream-of-consciousness video of unsettling discomfort.

At all venues, anxiety was a constant. Such pressing issues as the environment (Sophie McCormack and Rachel Kelly), refugees (Sophie Harding and Elaine Crowe), homelessness and abortion were all addressed thoughtfully, the latter in a very good series of linked pieces by Ciara O’Neill.

Some standout projects by DIT photography graduates included Patrycja Terczynska’s Cold Room, a glimpse into the meat-processing industry, Edit Elias’s Congo Memoire, offering a personal close slant on the history of the Democratic Republic of Congo, Raimonda Milašiene’s elegiac documentation of Lithuania’s disappearing villages and Daniel Casey’s use of a glitchy flatbed scanner to record a close-up look at the kitchen midden of a rural midlands home, well described as “an excavation of photography itself”.

At IADT, Stephen Colleary managed to convey the state of being homeless in terms of traces and absence very effectively. Kieran Murray’s visual essay brought us into the mind of an implied observer.

Liezl Erasmus produced a skilled piece of photographic archaeology (very close in spirit to Sabina Mac Mahon’s work). Seán Laoide-Kemp’s aftermath images centred on the site of the landing of rifles by the Irish Volunteers in 1914 at Kilcoole.