Vera Klute studies the human animal in its natural habitat 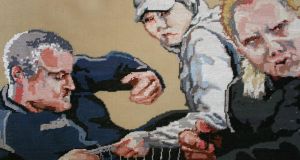 Commotion, a tapestry by Vera Klute 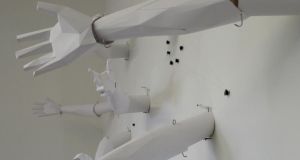 The installation Move Along by Vera Klute 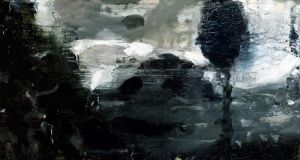 German-born, Dublin-based Vera Klute impressed with her graduation show at Dún Laoghaire IADT in 2006. Not that you could have guessed the route her work would take since. She has been unpredictable in her versatility, but perhaps we’re starting to get a more rounded picture of her considerable abilities with The Grand Scheme at The Lab, which incorporates two complex animated video projections, an ingeniously elaborate kinetic sculpture, highly realistic wax and polystyrene sculptures, drawings and – oh yes – several tapestries.

On second thoughts, perhaps we’re not quite getting a rounded picture. Who knows what she’ll do next? From her graduation animation piece, she has displayed an interest in the structure and routine of everyday being and everyday beings, bringing the eyes of specialists to bear on the human animal in its native habitat. Even here, though, versatility applies. At a rough estimate, the specialists might include a social anthropologist, a time and motion expert, a phenomenologist, an engineer and a physicist. The viewpoint is usually that of an intrigued but puzzled outsider trying to make sense of a game that seems to make sense to those involved in it but appears nonsensical otherwise.

Given that her subject could be summarised as the everyday viewed as inexplicably strange – think Beckett – it’s hardly surprising that there is something unsettling, disturbing and even slightly creepy at the heart of her work. Look no further than the main sculptural piece at The Lab. It is called Move Along, and it does just that, moving you along to the screening room to see a video that, you gradually realise, takes a rather harsh view of the herd instinct in humans, although with humour thrown in. Klute has a feeling for slapstick.

Move Along consists of a series of arms, with hands attached, precisely sculpted from scored and cut white paper. Animated by lengths of string attached to an electric motor, they usher us through the gallery. They also attract your eye because they are beautifully made and have the uncanny life-like quality of a ventriloquist’s dummy.

This is no accident, as the two wax sculptures, Growth (1 and 2), bear out.These disturbing sets of heads are family groupings, a mother and child, and a mother and her four adult offspring. Klute has connected them like conjoined twins – with echoes of Invasion of the Body Snatchers. More, she has an emergent head sprouting from the neck of the mother with the young child. She doesn’t prescribe meanings, but the interior of these wax likenesses is polystyrene, perhaps implying some scepticism about individuality and free will. As does Swarm and the three drawings, each a layered image of a typical grouping in society: family, school class, sports team.

The tapestries, images of gang violence, are another grouping. But is Klute loading the deck here? She may be understating her own capacity as an independent agent, like those agents of inquiry she evokes through the idea of the notional observer, those who analyse and assess, who may be part of the group but have not surrendered to groupthink. Still, it is an exceptionally good show.

In Some Untidy Spot, Stephen Lawlor makes a series of remixes of classical paintings, as paintings and as miniature sculptural busts.

Having successfully established himself as a printmaker, Lawlor turned to painting in a serious way in the mid-1990s. After a tentative beginning, he has gone on to make several fine series of works, embracing the sheer versatility and fluidity of oil paint and cumulatively increasing the range of his subject matter.

What he’s doing here is a little different and takes nerve. Not only is it art about art, but in drawing on paintings by the likes of Leonardo da Vinci, Hans Holbein, Jan van Eyck and Nicolas Poussin, he is getting to grips with works that have, over centuries, established themselves as durable and exceptional. It used to be that students learned by copying from the masters, which in many ways is a very sound practice, because when you start dealing with the nuts and bolts of a painting you realise what a complex construction it is.

Lawlor hasn’t set out to make copies in that sense, or appropriations in the postmodern sense. His works are more studies based on originals, and, as mentioned, consciously remixed studies at that. He introduces more recent stylistic nuances into the process. Judging by appearances, they include a quasi-Fauvist, broad-brushed handling of detail, a kind of photographic smearing of the image generally identified with Gerhard Richter, and an existentialist paring-back to the essence characteristic of Alberto Giacometti.

The results are not only remixes but mixed, as in uneven. If you set out to grapple with such illustrious predecessors, you have to get it right or it could seem as if you’re just hitching a ride. Some of Lawlor’s works, such as Episode, look very good, with density and depth. Many, though by no means all, look fine as pieces in themselves, but sometimes the surfaces get aimlessly clogged and muddied. Sometimes the imposition of a method is heavy-handed, as in a blurred retake of Henry VIII’s portrait. Blurring definitely becomes an overused device.

The problem here is not just a comparison with Richter, or for that matter with Giacometti, each of which would be a serious issue. It’s also with painters much closer to home who have delved in different ways into aspects of classicism, notably Robert Armstrong, Paul Doran and Genieve Figgis.

The abiding feeling is that the exhibition is ambitious, and promising, but premature.