The Kerry-based artist is a singular figure 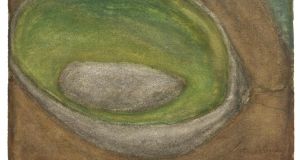 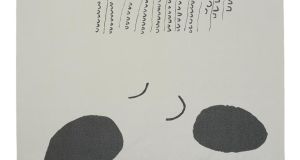 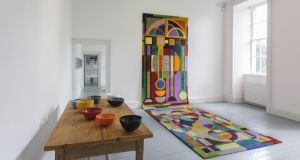 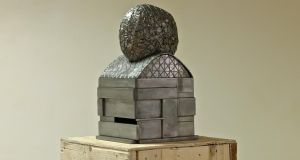 House, a sculpture by John Gibbons 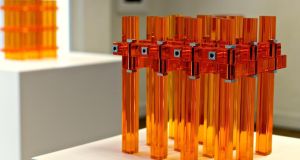 A Maria Simonds-Gooding retrospective opens later this week at the Royal Hibernian Academy. Simonds-Gooding is a singular figure in Irish art. Yes, her subject is landscape, and landscape is the default setting for Irish painting. But, while she makes paintings, it would be inaccurate to describe her as a painter, exactly. It’s hard to define what she is. What she does combines aspects of drawing, painting and, very definitely, sculpture. The tactile, physical nature of her work unmistakably allies it to sculpture: obviously so, perhaps, when considering her plaster bas-relief compositions, but it holds true even in her prints.

Her landscapes are not typically Irish, although she is rooted in the Irish landscape. She was born in India to an Irish mother and an English father, and was brought as a child to Co Kerry in 1947. After studying art at NCAD in Dublin, then in Brussels and at the Bath Academy of Art in Corsham, she returned to Kerry in 1968. Since then she has been based in a rural part of the Dingle peninsula.

While she maintained a smaller place in Dublin for a considerable period (she shows with Taylor Galleries), she has been drawn to the relative isolation of Kerry, and she acknowledges to being both reclusive and, less frequently, tremendously sociable by nature. Her work is made with childlike enthusiasm and uncompromising integrity. She is quite ruthless about it. She has to be utterly fascinated by everything involved in its making: the concept, the materials, the process, the technique, the image.

The appearance of things is of peripheral concern to her. Although she is an acute colourist, she usually dispenses with colour altogether, preferring a spare, tonal palette. Our relationship with the land, in its most basic, elemental form and in its most philosophical and transcendent aspects, is at the heart of her work. She likes sites where both are clearly spelled out, as they are in the hill farms around her. There is a direct correspondence between the way farmers have inscribed marks on the land – habitations, boundaries, lazy beds, plough furrows, bog cuttings, vegetable gardens, pathways – and the way she makes marks on paper or in plaster. Hence the pared-down, ascetic starkness of her compositions, which can be almost frightening, but are at the same time inviting and enveloping.

Maria Simonds-Gooding: A Retrospective is at Royal Hibernian Academy from Friday until October 26

There is often a disarmingly homespun, DIY quality to Isabel Nolan’s projects, an emphasis on craft and making. They are fragmentary attempts to grasp a fragmented world. She rarely ties herself down to one particular material or way of working for any given show, and that is resoundingly true of The Weakened Eye of the Day, devised as a coherent whole for the four ground-floor galleries of Imma’s east wing.

It may be diverse in form and substance, encompassing drawing and watercolour, text, steel, stained glass, ceramics and textiles – a big, hand-tufted wool rug –but it is, on the face of it, thematically tight.

The title derives from a Thomas Hardy poem in which the sun seems drained of all energy on a gloomy winter afternoon, anticipating death and coldness. Nolan looks to the literal, eventual death of the sun and sets out to explore how we try to make sense of an incomprehensible world, especially in terms of light and colour, both scientifically and metaphorically.

Her rug recalls the rainbow-coloured geometric compositions of Sonia Delaunay. Sculptural pieces evoke models of the solar system and maps of the heavens. Rock Founded Place gives a voice to the earliest rock on Earth.

Finally, a large, black-and-white photograph of donkeys was taken in the Royal Hospital Kilmainham’s graveyard. It all holds together well and is consistently engaging, though the spaces do feel marginally overcrowded.

Gibbons/Walker/Warren marks the arrival of one of Ireland’s premier sculptors, Corban Walker, at Hillsboro Fine Art. Walker, who lives in Brooklyn, New York, shows there, and internationally, under the auspices of Pace Gallery. He represented Ireland at the Venice Biennale in 2011. His work combines elements of the languages of minimalist abstraction and modernist architecture, not primarily as a formalist exercise but as a means of examining how we experience the urban environment, practically and culturally.

The crucial fact is that everything he does is anchored to what he calls “Corbanscale”: the scale, that is, of a person of his own height of 4ft.

He can and does present the familiar with a sense of proportion and size that subtly defamiliarises it. At the Hillsboro, lengths of orange acrylic bar are crisply arranged in dense geometric constructions that have an even, hypnotic visual rhythm.

Both John Gibbons and Michael Warren already show with Hillsboro. Warren, well-known for many publicly sited monumental abstract sculptures, often in wood, shows vertical pieces based on heavy, ancient wooden bed-frames and sagging, steel mesh supports. There is something brooding and tragic about them.

Gibbons, who is based in London, shows several of his parcel-like stainless steel sculptures. Remarkable works, made with tremendous fluency, they are charged with energy and pulse with a sense of contained, inner life.