Minimalism in the Dutch Golden Age at the Kerlin 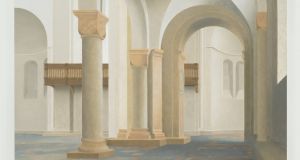 Faith After Saenredam and Other Paintings

There is a clear affinity between the work of Paul Winstanley and Pieter Saenredam, a painter who flourished during the Dutch Golden Age in the 17th century. The son of an engraver, Saenredam was apprenticed as a painter and in time invented a subject matter with which he is forever identified: deserted church interiors. Remarkably, of his 50 or so surviving works, almost half centre on just two churches, Saint Bavo and the Mariakerk in Utrecht. Far from the pomp and luxuriance one might expect of church interiors, these Dutch Reformation interiors are usually white and spare to the point of austerity.

Saenredam’s paintings are virtuoso exercises in architectural perspective. It has been suggested that he was motivated more by his passion for architecture than by his faith. Certainly he delights in the formal purity of the enclosed, whitewashed spaces, generally free from distracting decoration and, of course, people. Whatever his motivation, these qualities give his work a startlingly modern appearance when you encounter it in its art historical context in galleries. It seems to anticipate aspects of abstraction and minimalism.

You can see its appeal for Winstanley, who has long pursued a form of painting that incorporates aspects of both photographic representation and minimalism. This has led him into an engagement with architectural interiors and exteriors. Communal areas in mid-20th century modernist buildings, including walkways, corridors and lounges recur. He reached a landmark with the publication of his project Art School (Ridinghouse) in 2013, consisting of a series of paintings of vacant studios outside the academic year: great studies of space, light and potential. A minority of his paintings includes figures.

The key work in his new show at the Kerlin is his recreation, or re-imagination, of a lost painting of Mariakerk by Saenredam. Winstanley set about approximating it by referring to a surviving, precise preparatory sketch. Then he moved on to make another painting of Mariakerk, but from a slightly altered viewpoint, so that we can see a window and a golden tapestry, both of which, he points out, were documented as being there. But in composing his painting, Saenredam made sure neither would be seen, though he did include comparable elements in other paintings. The bottom line is that Winstanley’s re-imagination of the Saenredam is of course a Winstanley. And perhaps our version of anything is uniquely our own.

Other paintings include people looking at paintings in the National Gallery, London. A man and a woman stand before a Vermeer. A larger group moves around in front of a religious icon painting. The moving figures are blurred as though by a long photographic exposure. The figures are ephemeral, the artworks fixed and bathed in light. There’s also a painting of a recurrent subject: a birch tree, which of course changes all the time even in its constancy. Seeing is believing, but the implication of these beautifully poised works is that our faith may be misplaced. Until July 1st, kerlin.ie

Don Cronin’s sculptures exude an air of technological elegance. They are sleek and machined looking, their composite parts fitting together like precision engineered components. Cronin’s materials, especially polished steel, acrylic and aluminium, and his language of form suggest a relationship to the technology of transport. That could be anything including motorbike, car, yacht, or plane, though he doesn’t make a representation of any particular machine. What’s important is the business of moving at speed through space. He makes complex amalgams of several different component parts.

He is comfortably at home with the aesthetics of technological design. His background involves a sculpture degree from the Crawford College of Art in Cork, but prior to completing that he diverted to UCC to take a degree in philosophy. Studying philosophy did not encourage him to attach a filter of critical theory to his sculpture, and he pretty much leaves us to make of it what we will.

As a sculptor he his aligned with a recognisable modernist lineage, with a nod to Russian Constructivism but probably starting with the great Catalan artist Julio González, whose constructed iron sculptures profoundly influenced Picasso and the American artist David Smith. Anthony Caro took up the baton in Britain, and Cork had its own exponent of constructed steel sculpture in John Burke, a very fine artist. They are all male, you might notice, and there is a quality of muscular masculinity to a great deal of sculptural construction.

Given the stereotyping associated with fast machines, it could be argued that Cronin’s work is similarly gendered. In the event it is distinctly more ambiguous and nuanced. Not so much heroic masculine endeavour as technical precision and ingenuity. Of the five pieces just one, Ear for Verse, suggests the fate awaiting the chrome and vitality: rust and decay in time. Until May 27th, crossgallery.ie

THIS ISN’T IT - Margaret O’Brien

THIS ISN’T IT is a brilliant installation in which visual, aural and physical elements are combined to produce an open-ended, uncertain, speculative space for the visitor’s thought – and doubt. Margaret O’Brien is, she says, thinking about the artistic process as a set of emergent “relationships between research, practice and outcomes”. So far, so good, you might feel. Not so fast. She further has in mind a failure to resolve those relationships and the failure of the artist’s efforts within each sphere. The cumulative end result of each successive stage is failure. It’s a version of Beckett’s “Fail again. Fail better”. You work from a position of not knowing, and end up not knowing. All you’ve managed to do is negotiate ”a critical space of failure.”

O’Brien uses a rearrangement of three notes from the score of Willy Wonka and the Chocolate Factory, a loop of Super 8 film about “an effort to perform,” on-off neon text in the Bruce Nauman mould (“moments of clarity”) and – an inspired touch – an electrical element that produces disconcerting waves of heat. Everything contrives to keep us on edge and unsettled, but also fascinated. Failure, you conclude, can be exhilarating. This installation deserves the widest possible audience and a place in a public collection. Until May 31st, nagallery.ie